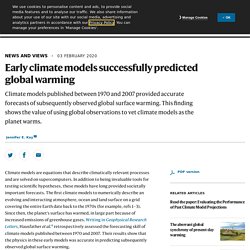 In addition to being invaluable tools for testing scientific hypotheses, these models have long provided societally important forecasts. The first climate models to numerically describe an evolving and interacting atmosphere, ocean and land surface on a grid covering the entire Earth date back to the 1970s (for example, refs 1–3). Since then, the planet’s surface has warmed, in large part because of increased emissions of greenhouse gases. Writing in Geophysical Research Letters, Hausfather et al.4 retrospectively assessed the forecasting skill of climate models published between 1970 and 2007. Their results show that the physics in these early models was accurate in predicting subsequently observed global surface warming. A key point emphasized by the authors is that the forecasting ability of climate models is limited by unknowable future climate drivers.

A fitting 1980s Soviet government environmental poster entitled simply 'there is no other home'.… 1987, Sydney Morning Herald… Sixteen world leaders, 30 years, one common concern: #ClimateChange. (Collected from @brutamerica) Keith Stewart sur Twitter : "Just in case you were feeling sorry for oil companies, remember that Shell predicted the rise of @GretaThunberg, and a wave of climate lawsuits, way back in 1998 h/t @amywestervelt. *****Shell Oil's Stark Climate Change Warning from 1991. *****Ed Hawkins: “Such changes in temperature will cause melting of the polar icecaps, which, in turn, would result in the inundation of many coastal cities, including New York and London.” (3/3) All this from a coal industry journal in 1966 http.

#OnThisDay 30 years ago, Margaret Thatcher became the first leader of any major nation to call for a #UnitedNations treaty on #climate change. 'So they knew': Ocasio-Cortez questions Exxon scientist on climate crisis denial – video. *****This is an excellent interview & Jane Fonda is speaking genuinely about an issue she is deeply concerned about (climate change). She can't be easily dismissed as a brainwashed teenager.…

"Every disaster movie starts with the government ignoring a scientist" □️ The New York Times in 1988… The UK politicians who talk the most about climate change. The phrase “climate change” has been mentioned more than 19,000 times in British parliamentary debates, with Labour politicians using the term more than representatives from any other party.

These are among the findings to emerge after Carbon Brief extracted data from more than 200 years of records from the UK’s houses of Commons and Lords. The analysis reveals how the climate conversation in British politics has shifted over the years, from discussing the “greenhouse effect” in the late 1980s to more recent debate over the “climate crisis”. It also shows which MPs and peers have devoted the most time to this issue, whether that means arguing for more action to tackle global warming, or less. Recent waves of protests and new reports from the UN’s Intergovernmental Panel on Climate Change (IPCC) have galvanised a shift in how people discuss the climate. This, too, is reflected in the data.

*****Ed Hawkins HoL 1959: This was the first mention of climate change in the UK Parliament. In 1959. *****Ed Hawkins HoL 1959: “Can my noble friend say whether he & British Railways have taken account of the fact that what were abnormal temperatures last summer may not be abnormal if we continue to discharge CO2 into the air by the burning of various fos. Here are Exxon's climate modeling results from 1982. They've been extremely accurate to-date, but I'd really rather not find out if they're right about the future.

Twitter. Twitter. *****For… reasons… I am reading a 1983 EPA report titled “Can We Delay a Greenhouse Warming?” and it is inCREDible. Stunning consistency since then: “Current estimates suggest that a 2 degrees C increase could occur by the middle of. Roger harrabin sur Twitter : "History will indeed harshly judge people who promoted climate change denial for ideological reasons. (If it remembers them) But some independent scientists obliged mainstream science to answer questions it was ignoring. We ne. Has anyone noticed that the world is still warming up? Just checking. #COP24… American Petroleum Institute president's warning to the oil industry about global warming in 1965, new in @NatureClimate. Twitter. Big Oil Knew. The American Petroleum Institute (API), the oil industry’s most powerful trade group, first became aware of climate change as early as 1959, nearly 60 years ago. 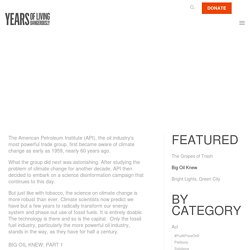 What the group did next was astonishing. After studying the problem of climate change for another decade, API then decided to embark on a science disinformation campaign that continues to this day. But just like with tobacco, the science on climate change is more robust than ever. Climate scientists now predict we have but a few years to radically transform our energy system and phase out use of fossil fuels. It is entirely doable. BIG OIL KNEW: Part 1 BIG OIL KNEW: Part 2.