Others of various Views 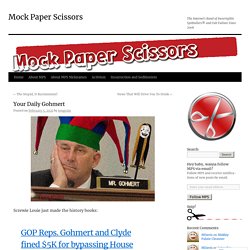 This is what Republicans like Marjorie Taylor Greene and Jim Jordan are really afraid of - Raw Story - Celebrating 16 Years of Independent Journalism. Last night, nearly a dozen Republicans joined all the Democrats in the House to strip Marjorie Taylor Greene, a Donald Trump protégé from Georgia, of her committee appointments, in particular her place on the powerful House Budget Committee. 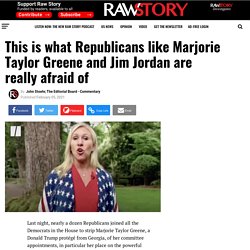 This was in response to her incendiary speech and fear-mongering before taking office. In effect, they neutralized her. If you don't have a seat at the table, especially the big government money table, you don't have much in the way of leverage or bargaining. This article was originally published at The Editorial Board You could say, however, this was her second neutralization. Constituents from Georgia's most conservative corner didn't send her to the United States Congress to represent them, to fight for their interests or their share of the big government money, to "bring home the bacon.

" Op-Ed: I’m a Parkland Survivor—Marjorie Taylor Greene Needs to Resign. On February 14, 2018, I hid inside my classroom for three hours attempting to keep 15 students safe while a gunman terrorized my school. 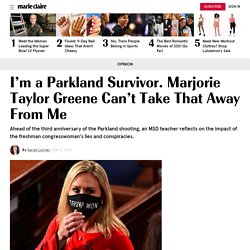 By the time the SWAT team released us, it would become one of the deadliest school shootings in American history. The day in which 17 lives were taken needlessly, senselessly, and horrifically. Nearly three years later, I can still see Building 12 (also known as the Freshman Building, where the gunman entered) from my same classroom at Marjory Stoneman Douglas High School. I see it every time I open the door. Who is the Republican extremist Marjorie Taylor Greene? Awaiting punishment for her lengthy history of extreme and violent commentary on Thursday, Marjorie Taylor Greene rose to introduce herself to the Congress. 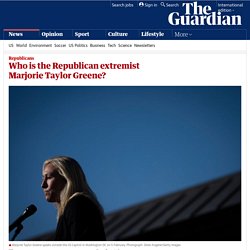 Wearing a mask embroidered with the words “FREE SPEECH”, the freshman congresswoman from Georgia regretted that she had not yet had a chance to tell her House colleagues “who I am and what I’m about”. Marjorie Taylor Greene’s Bizarre QAnon Floor Speech, Translated. Pundits Warn Removing Marjorie Taylor Greene From Committee Assignments Could Leave Her With Free Time. 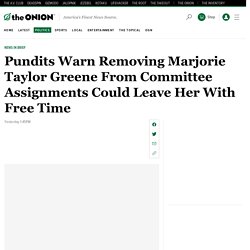 House of Representatives not to do something it might regret, political pundits from several major news outlets warned Thursday that removing Rep. QAnon Rep. Marjorie Taylor Greene Isn’t Owning the Libs. She’s Leading the GOP’s Space-Laser Suicide March. Rise of the Barstool conservatives. Over the coming months, hundreds of thousands of words will be written about Donald Trump's presidency and the future of the Republican Party. 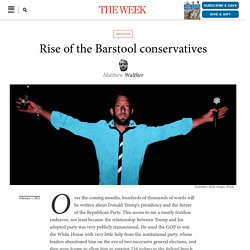 This seems to me a mostly fruitless endeavor, not least because the relationship between Trump and his adopted party was very publicly transactional. He used the GOP to win the White House with very little help from the institutional party, whose leaders abandoned him on the eve of two successive general elections, and they were happy to allow him to appoint 234 judges to the federal bench and sign one tax bill in the first year of his administration. The Not-So-Strange Death of Right Populism. Much as he did twelve years ago, Joe Biden comes to the White House amid a punishing economic crisis. 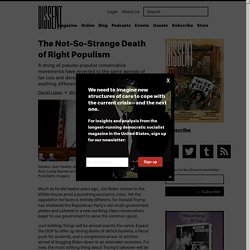 Yet the opposition he faces is entirely different, for Donald Trump has shattered the Republican Party’s old small-government pieties and ushered in a new working-class conservatism eager to use government to serve the common good. Just kidding: things will be almost exactly the same. Expect the GOP to offer up strong doses of deficit hysteria, a fierce push for austerity, and a congressional war of attrition aimed at bogging Biden down in an extended recession. For now, the most striking thing about Trump’s takeover will be how little it affects the basic dynamics of the right in opposition.

To be sure, we’ll continue to hear all the hits from the Trumpian songbook: the migrants swarming across the border, the effrontery of the coastal elites, the Chinese yellow peril, the treason of the intelligentsia, the pedophilic cabals hiding in plain sight. Josh Hawley Wants To Be America’s Most Dangerous Republican. ARMIES OF THE RIGHT; The Young Hipublicans. Like the rest of their generation, they've been trained, from preschool onward, in the tenets of cooperation, politeness and racial and gender sensitivity. 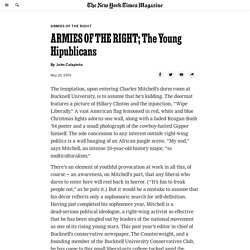 As much as they would hate to admit it -- as hard as they try to fight it -- these quintessential values have suffused their consciousness and tempered their messages. You can see it in Charles Mitchell's editorship of The Counterweight. Back in the 1980's, the editors of campus conservative newspapers subscribed to the theory spelled out by D'Souza in his book ''Letters to a Young Conservative.'' ''At The Dartmouth Review,'' he wrote: ''To confront liberalism fully we . . . had to subvert liberal culture, and this meant disrupting the etiquette of liberalism.

Dem Convention Made No Mention Of Russiagate Or Impeachment, Because Those Were Fake Things. The only interesting thing about either of the conventions held by America’s two mainstream political parties this month was not anything that was said by the interminable parade of vapid speakers, but rather what those speakers did not say. 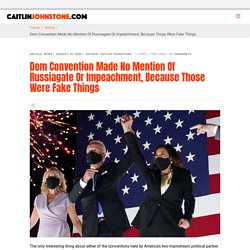 Despite their dominating mainstream news cycles for years on end, at no time during the four-day Democratic National Convention was the word “impeachment” ever uttered, nor was any mention made of the Mueller investigation into allegations of collusion between Trump and the Russian government. Politico reports: Eight months after Democrats mounted a historic effort to remove Donald Trump from office, not a single speaker uttered the word “impeachment” during their four-day convention. John Yoo Gets Bashed Over Claim Of 'Unfettered Executive Power' On Wednesday, recent Trump appointee Judge Neomi Rao gave a ridiculous ruling on the Flynn case. 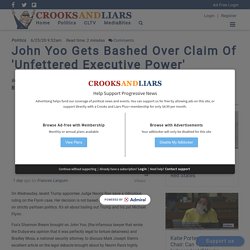 Her decision is not based on any legal precedent, but on strictly partisan politics. It's all about bailing out Trump and his pal Michael Flynn. Fox's Shannon Bream brought on John Yoo, (the infamous lawyer that wrote the Dubya-era opinion that it was perfectly legal to torture detainees) and Bradley Moss, a national security attorney, to discuss Mark Joseph Stern's excellent article on the legal debacle brought about by Neomi Rao’s highly political decision. Laura Loomer Is the Congresswoman Donald Trump Deserves. Laura Loomer, who describes herself as the “most banned woman and censored woman in America,” has found a way to break through her corporate-imposed wall of silence: by running for Congress in Donald Trump’s backyard. The political stuntwoman is currently in Palm Beach, Florida, and is competing in a GOP primary for Florida’s 21st District. That also happens to be where Trump’s Mar-a-Lago estate is located and the president is registered to vote in 2020.

And, although Florida’s 21st District is safely Democratic—voters there supported Hillary Clinton over Trump by a 19.5-point margin in 2016—Loomer has already gained a lot from her longshot bid. She’s relevant again. Winning the race is almost beside the point. Tulsi Gabbard and the Return of the Anti-Anti-Trump Left. Rep. Tulsi Gabbard. Photo: Joe Raedle/Getty Images Tulsi Gabbard has been slowly edging toward leaving the Democratic Party and, it now seems more likely than not, launching a spoiler candidacy to peel disaffected left-wing votes away from the Democrats. House Democrats Issue Condemnation Of Ukraine For Making It Harder To Avoid Impeaching Trump. WASHINGTON—In an effort to hold those responsible to full account, congressional Democrats issued a resolution Monday condemning Ukraine for its role in making it harder to avoid impeaching President Trump. “It’s completely unacceptable for Ukraine’s leaders to engage in these potentially criminal talks that have pushed us perilously close to taking action against the president,” said House Speaker Nancy Pelosi, telling reporters that the bill, H.R. 2995, would “send a powerful message” to any nation or individual who would attempt to force Democrats’ hands at conducting oversight.

“If these allegations are true that Ukraine allowed itself to be blackmailed by President Trump, we have no choice but to denounce these actions in the strongest possible terms. Andrew Yang Loads Shotgun As Hissing, Crackling Copy Machine Lurches Towards Campaign Staff. Pelosi Concerned Outspoken Progressive Flank Of Party Could Harm Democrats’ Reputation As Ineffectual Cowards. WASHINGTON—Admitting she had worries about the rise of left-leaning activist groups within her party, House Speaker Nancy Pelosi expressed concerns Thursday that outspoken progressives could do permanent damage to Democrats’ reputation as ineffectual cowards. Chuck Grassley Accidentally Lies In State For Few Hours After Drifting Off In Capitol Rotunda.

WASHINGTON—Surrounded by onlookers, former colleagues, and Supreme Court Justices paying respect to the slumbering U.S. Senator, Chuck Grassley (R-IA) accidentally lay in state for a few hours Monday after drifting off in the Capitol rotunda. “Today, we honor a giant of the United States Senate, a devoted father, and a dear personal friend for his great service to this country,” said a tearful Majority Whip John Cornyn in a stirring retrospective about the sleeping Iowa Republican, whose quietly dozing body had been mistakenly draped in a U.S. flag for public viewing just hours after the exhausted 85-year-old senator reportedly yawned and stretched out on the floor for a catnap beneath a frieze of George Washington.

The Very Funny Ad Using Susan Collins' Own Words. The Forever War Is So Normalized That Opposing It Is “Isolationism” Analyzing The 2020 Presidential Contenders' Housing Policies — Data For Progress. Henry Kraemer (@HenryKraemer) The next President of the United States will give a shit about housing. The average American spends far more on housing than any other expense, the vast majority sees housing affordability as a serious problem, and most people report having made a serious personal sacrifice to afford rent or a home payment. Housing is central to economic stability, deeply intertwined with race, and a critical factor in climate change.

Nancy Pelosi Slams Edited Footage With Claim That When She’s Drunk You’ll Fucking Know It. Who is Amy Klobuchar? 5 facts about the senator from Minnesota that may surprise you. Nancy Pelosi Planning To Reenergize House By Injecting Self With Blood Of Young Representatives. WASHINGTON—Expressing her excitement at the influx of newly elected progressives in Congress, Nancy Pelosi told reporters Wednesday of her plans to reenergize the House of Representatives by injecting herself with the blood of her party’s young members.

To know what President Clinton will really do, listen to what she says. Sean Hannity Suddenly Loves Julian Assange Now That He’s Anti-Hillary. Sean Hannity's Tirade in Response to Jon Stewart's Criticism. Congress ready to ban 'pay for patriotism' salutes at sports events. Oath Keepers: The heavily armed white vigilantes in Ferguson, explained. The Democratic Party Would Triangulate Its Own Mother.

No cure for the diseases of American democracy?   David Brooks Wants Gay Rights Advocates To 'Go Gently' With Their Opposition. Fugelsang: ‘If You Don’t Like Gay People, Take It Up With The Manufacturer’ A Frightful Prospect: Hillary vs. Jeb. 5 Powerful Shifts Transforming America Society into an Unrecognizable and Frightening Future. Tea Partiers Are Right: Jeb Bush Is a RINO. Hucksters, hawks, and charlatans: the GOP’s 10 most clownish 2016 presidential candidates. Rick Perlstein: “Ronald Reagan absolved America almost in a priestly role not to have to contend with sin. The consequences are all around us today”

How bad would Mitt be? Mitt Romney: Income Equality Concerns Are The 'Politics Of Envy' Gov. Mitt Romney Blocked Birth Certificates To Gay Parents; Felt They Are Unfit And Kids Would Be Developmentally Impaired. Does Congress Get a Passing Grade on Science? The Romney-Cheney Doctrine - By Representative Adam Smith. Gary Johnson: Mitt is ‘without one molecule of brain’ Charlie Fuqua, Arkansas Legislative Candidate, Endorses Death Penalty For Rebellious Children In Book.