Today's WorldView from The Washington Post. Over the weekend, thousands of mourners in cities in Iraq and Iran participated in funeral processions for Maj. 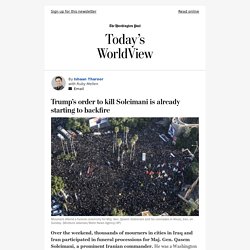 Gen. Qasem Soleimani, a prominent Iranian commander. He was a Washington boogeyman, implicated in years of chaos and bloodshed. But the theocratic regime and its allies cast his death — the result of a U.S. drone strike on a convoy carrying him and a number of other prominent pro-Iranian militia leaders out of Baghdad’s international airport early Friday — as a martyrdom, the heroic sacrifice of an icon of “resistance” whose influence and supposed charisma helped stitch together a network of pro-Tehran proxy groups throughout the Middle East. Iran’s leadership vowed “severe revenge,” though many analysts suspect the regime will bide its time before mustering a violent reprisal. On Sunday, Iran made its fifth announcement about winding down its obligations to the 2015 nuclear deal.

In Iraq, too, the backlash was swift. The Soleimani Assassination Is America’s Most Consequential Strike This Century. Now the notion of Iranian control of these cities hardly beggars the strategic imagination. 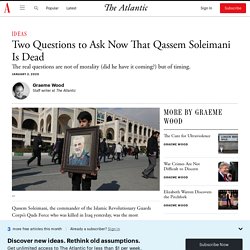 The Iran-Iraq War has lasted three decades longer than history supposed, and the machinations of Soleimani have been largely responsible for its outcome now looking favorable to Iran. Talk of two withdrawals - Iraq and Iran react to the killing of Qassem Suleimani. FROM BAGHDAD airport, where an American air strike killed him, to his hometown of Kerman, about 1,300 kilometres away in Iran, hundreds of thousands of people filed into the streets to mourn General Qassem Suleimani on January 5th. 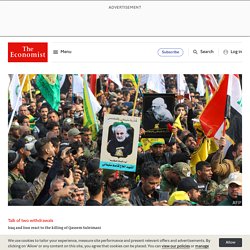 They came out in Baghdad and Tehran, and the Shia holy cities of Najaf and Karbala. Top officials in both countries joined the crowds of people beating their chests for Iran’s most prominent commander. And as the funeral procession advanced from city to city, the government of each country began to respond to the American attack. The first move came in Iraq, where the parliament passed a resolution calling for foreign troops to leave the country. The move was aimed at America, which has some 5,000 soldiers in Iraq. Iran has taken a step that could prove more troubling.

Last summer, in response to tightening American sanctions, Iran breached the deal’s limits on the quantity and purity of uranium it is allowed to keep. Pompeo Warns Iran That U.S. Could Attack if Tehran Retaliates. WASHINGTON — Secretary of State Mike Pompeo warned Iran on Sunday that the United States could attack the country within its borders if leaders there take hostile actions against American interests in the aftermath of the drone strike that killed a top general. 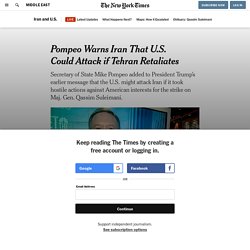 “I’ve been part of the discussion and planning process — everything I’ve seen about how we will respond with great force and great vigor if the Iranian leadership makes a bad decision,” Mr. Pompeo said on CNN’s “State of the Union.” “We hope that they won’t, but when they do, America will respond.” “We will be bold in protecting American interests, and we’ll do so in a way that’s consistent with the rule of law,” he added. In appearances on five television news shows on Sunday morning, Mr. Mr. The targeting of cultural sites is against international law, and critics denounced Mr. The comments by Mr. Lawmakers have criticized Mr. When asked Sunday by several interviewers whether the United States would attack cultural sites, Mr. 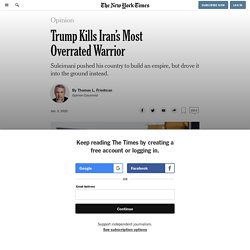 The Dire Consequences of Trump’s Suleimani Decision. Americans would be wise to brace for war with Iran. 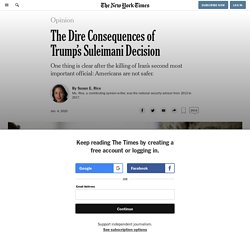 Full-scale conflict is not a certainty, but the probability is higher than at any point in decades. Despite President Trump’s oft-professed desire to avoid war with Iran and withdraw from military entanglements in the Middle East, his decision to order the killing of Maj. Gen. Qassim Suleimani, Iran’s second most important official, as well as Iraqi leaders of an Iranian-backed militia, now locks our two countries in a dangerous escalatory cycle that will likely lead to wider warfare. How did we get here? Soleimani posted memes antagonizing Trump on social media. How the Soleimani assassination could pave the way for a new deal with Iran. Why lying about an ‘imminent’ attack would matter. The Soleimani Assassination Is America’s Most Consequential Strike This Century.