Judge orders floor limit for UWS condo 200 Amsterdam Ave. The soon-to-be tallest building on the Upper West Side might have to be trimmed at the top. 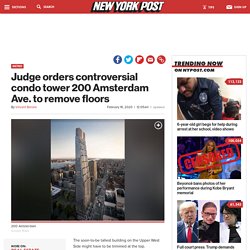 A State Supreme court judge ruled earlier this week that the city must revoke the building permit for the nearly-completed, 55-story condo tower at 200 Amsterdam Ave. — and that its developers must remove a yet-determined number of floors because the structure exceeds zoning limits, according to the nonprofits behind the lawsuit. Ruling Could Put 200 Amsterdam Avenue Loan in Default. The construction loan for 200 Amsterdam Avenue could be in danger of default after a judge ordered the developers to deconstruct part of the building. 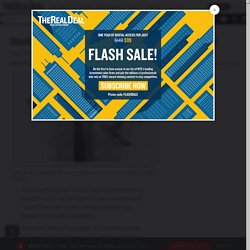 (Credit: iStock) The surprising court ruling requiring developers to deconstruct 20-some floors of a nearly completed Upper West Side condo building could put the project’s financing in jeopardy. Upper West Side’s would-be tallest tower could lose 20 stories after legal challenge. The legal challenges against 200 Amsterdam Avenue, a 52-story tower on the Upper West Side, have culminated in an unprecedented decision: A State Supreme Court judge has ordered that the building must lose as many as 20 floors (or more) in accordance with the zoning for the neighborhood. 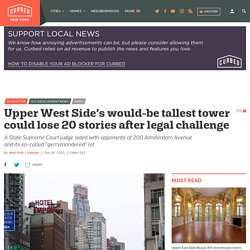 The decision comes several months after the 668-foot building, the neighborhood’s tallest, topped out; sales for its 112 apartments have already launched, although none appear to be in contract, according to listings posted on StreetEasy. Gaming New York's Skyscraper Height Zoning Laws. Three supertall New York City skyscrapers reveal just how creative lawyers can be in gaming the city’s zoning codes. 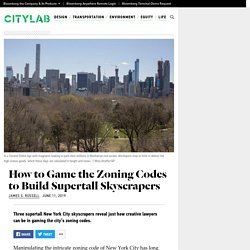 Manipulating the intricate zoning code of New York City has long been a badge of honor among a small cadre of developers. In 1993 developer Laurence Ginsberg was required to lop 12 floors from a 31-story tower on Manhattan’s Upper East Side after he conveniently failed to notice that a height limit applied to his property. For a project called Trump City, the real estate mogul who is now President claimed development rights on a site near Lincoln Center that was partially under the Hudson River. With 1,200 closures already announced, retailers face another grim year. Pier 1 will close nearly half of its stores. 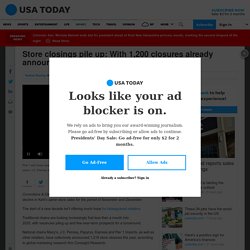 Macy's will close about a fifth of its locations over three years. J.C. Penney will close six stores. Working from Home: More Americans Are Telecommuting. California Is Considering a ‘Radical’ Statewide Upzone. That California is in the midst of a statewide housing crisis is not a particularly controversial statement. 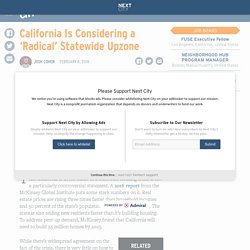 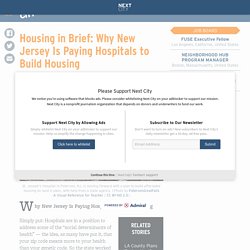 So the state worked out a first-of-its-kind program: the New Jersey Housing and Mortgage Finance Agency would offer hospitals a subsidy and a mortgage to build affordable housing on their land. The units must be affordable to those earning 80 percent of the area median income, and they must set aside 10-15 units as permanent supportive units, offered to people the hospital has identified as “frequent users.” Frequent users of hospital services are often people who are un- or under-insured and who could reduce their emergency room visits with ongoing care, substance use counseling, or stable and safe housing. 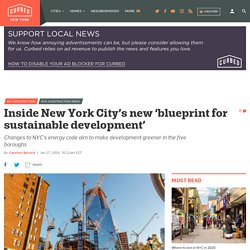 The Climate Mobilization Act, which passed last spring, makes sustainability a major priority for New York’s built environment, targeting buildings that are among the biggest contributors to the city’s carbon emissions. One component of that legislation, Local Law 97, requires owners of the city’s largest buildings to meet new emission standards beginning in 2024.

But the first major milestone won’t arrive for another decade: By 2030, emissions from large buildings must be slashed by 40 percent from 2005 levels; by 2050, that number must be 80 percent. Where to Get a Job in US? Phoenix Gains, NYC Loses in 2019. Photographer: Michael Nagle/Bloomberg Terms of Trade is a daily newsletter that untangles a world embroiled in trade wars. 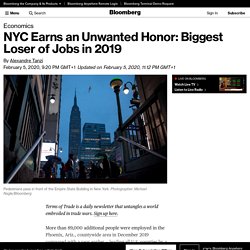 Which Cities Are Renters Fleeing, and Where Are They Going? Americans have long migrated from city to city in search of a better life, changing the face of regional real estate markets as they go. 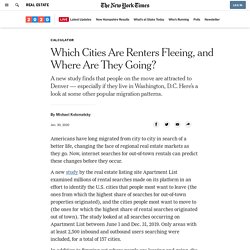 Now, internet searches for out-of-town rentals can predict these changes before they occur. A new study by the real estate listing site Apartment List examined millions of rental searches made on its platform in an effort to identify the U.S. cities that people most want to leave (the ones from which the highest share of searches for out-of-town properties originated), and the cities people most want to move to (the ones for which the highest share of rental searches originated out of town). The study looked at all searches occurring on Apartment List between June 1 and Dec. 31, 2019. Only areas with at least 2,500 inbound and outbound users searching were included, for a total of 157 cities. Overall, the city most desired by out-of-town renters was Denver, and the largest share of searches for Denver originated from far-off Washington, D.C.

The 2020 edition of the America’s Rental Housing report highlights other trends as well. For instance, it's become more common for higher-earning households to rent, and newly constructed rental housing tends to be built for the pricier end of the market. But the researchers flagged the way that difficulties with housing affordability are “climbing the income ladder” as a key finding. Among households earning between $30,000 and $44,999 annually, the share of “cost-burdened” renters (those spending more than 30% of their income on rent and utilities) increased by about 5.4 percentage points between 2011 and 2018, to around 56%.

New York City cybersecurity hub. How to Become a Green Lease Leader: The Latest in High Performance Leasing Practice. Everything You Think You Know About Housing Is Probably Wrong. The show’s curators, Nicholas Dagen Bloom, a scholar and advocate of public housing, and Matthias Altwicker, a Brooklyn architect, document the various ways midcentury public housing reformers replaced slum tenements mostly with far less dense forms of urbanism. All those high-rise slab buildings and H-, Y- and T-shaped housing complexes were designed to provide tenants with more light, air and open space. They were about replacing slum tenements with quasi-suburban developments. The same approach defined middle-class projects like Co-op City in the Bronx.

Low density was the point of building towers in the park. So while the notorious Lower East Side tenements described by Jacob Riis in “How the Other Half Lives” packed in some 1,100 people per acre, leaving only 13 percent of the tenement blocks as open space, Queensbridge Houses in Queens, from 1939 — one of the largest public housing complexes in North America — was built for 245 people per acre.

The target then rises to an 80 percent reduction by 2050, which will make the city carbon neutral for the first time. The law applies to all buildings over 25,000 square feet – or roughly 50,000 existing properties. Currently, buildings account for nearly 40 percent of the nation’s CO2 emissions, according to the Environmental and Energy Study Institute, and 70 percent of greenhouse gas emissions in NYC. “The number one contributor [of greenhouse emissions] are existing buildings, not vehicle traffic,” Bronx borough president Ruben Diaz Jr. said at a recent press conference announcing new solar infrastructure in the Bronx. A Historical Snapshot of New York Real Estate in the 2000s and 2010s. Billy Macklowe in Contract to Buy Park Slope Key Food.