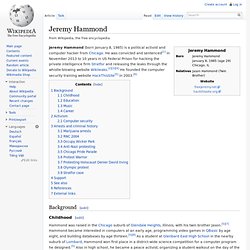 He was convicted and sentenced[1] in November 2013 to 10 years in US Federal Prison for hacking the private intelligence firm Stratfor and releasing the leaks through the whistle-blowing website Wikileaks.[2][3][4] He founded the computer security training website HackThisSite[5] in 2003.[6] Background[edit] Childhood[edit] Education[edit] Hammond attended the University of Illinois at Chicago on a full scholarship.

Fred Burton is Stratfor's Vice President for Counterterrorism and Corporate Security. Products Stratfor has published a daily intelligence briefing since its inception in 1996, when its rise to prominence as chronicled by the MSM occurred with the release of its Kosovo Crisis Center during the 1999 NATO airstrikes on Kosovo. Before the end of 1999, Stratfor had introduced a subscription service through which it offered the majority of its analyses. Stratfor has been cited by media such as CNN, Bloomberg, the Associated Press, Reuters, The New York Times and the BBC as an authority on strategic and tactical intelligence issues. 2011 Breach Stratfor breach first revealed via #LulzXmas - 24.12.2011 Stratfor's statement on the breach - 11.1.2012 Stratfor: Inside the World of a Private CIA - 27.2.2012 U.S. Other. Persona Management. Hedges: Jeremy Hammond Exposed State's Plan to Criminalize Democratic Dissent. 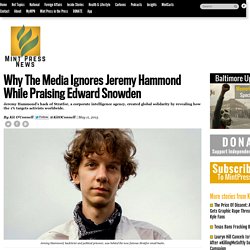 Jeremy Hammond, hacktivist and political prisoner, was behind the now famous Stratfor email hacks. The mainstream media has devoted hundreds of articles to NSA whistleblower Edward Snowden, the subject of the Oscar-winning documentary “Citizenfour,” but it’s not devoted the same level of attention to many other whistleblowers and political prisoners, like Jeremy Hammond, no matter how sensational the facts they revealed.

In November 2013, a federal court sentenced Hammond to 10 years in prison for his part in the hack of Strategic Forecasting, an Austin, Texas-based corporate intelligence agency, also known as Stratfor. The emails revealed that Stratfor gathers intelligence on behalf of private corporations while also sharing sensitive information with local and federal law enforcement. “Snowden is giving us a message of reform,” she said. Jeremy Hammond /Anarchaos. Jeremy Hammond was arrested on allegations of access device fraud and hacking. Jeremy is being charged as the main person behind the December document liberation on U.S. security company Stratfor that was posted on Wikileaks.

9 October Stanley Cohen, Defender of Anonymous in PayPal14 (...) Link Censorship as a Causality of Over-Classification.