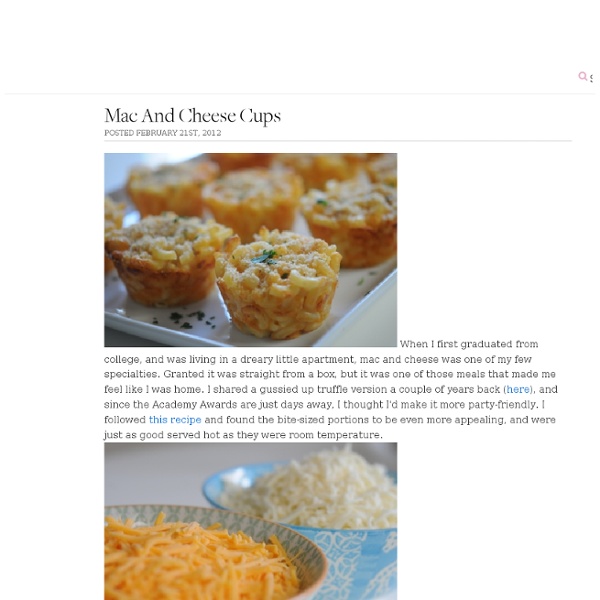 Share this image Share It Pin It When I first graduated from college, and was living in a dreary little apartment, mac and cheese was one of my few specialties. Granted it was straight from a box, but it was one of those meals that made me feel like I was home. I shared a gussied up truffle version a couple of years back (here), and since the Academy Awards are just days away, I thought I'd make it more party-friendly.

Pierogi Recipe October 2, 2010 My mom is obsessed with keeping a stocked freezer, but I guess I don’t really take after her, because my freezer tends to be relatively empty, aside from random containers of stock/ramen broth, frozen dumplings and pierogi. I admit, I store buy frozen chinese dumplings and pierogi for those times that I just don’t feel like cooking. I tell myself it’s because of ease and convenience, but really, I just love the taste of frozen pockets filled with deliciousness.

Daniel Tammet: The man who can do 82 x 82 x 82 x 82?* - Profiles - People Daniel's world is a rich and strange one, where every number up to 10,000 has colour, texture and emotional resonance. "The number one is a brilliant and bright white, like somebody shining a torch beam into my eyes ... Four is shy and quiet, like me. Eighty-nine is like falling snow ..." More remarkable still, he has described it all inBorn on a Blue Day, his memoir of his life with synaesthesia and savant syndrome, a rare form of Asperger's. Dr Darold Treffert, a leading researcher in autism, says: "Such first-person explanations of savant abilities are extremely rare, in fact nearly non-existent."

How to Make Proper Barbecue Chicken There's a lot of misconception when it comes to "barbecue." The problem is the word itself. It's used as a synonym for grilling, refers to the grill itself, or to the meat being grilled; it also has a sauce named after it; and sometimes it's just the word for the party itself held outdoors in somebody's backyard. Mac-and-cheese-o-matic Culture Connoisseur Badge Culture Connoisseurs consistently offer thought-provoking, timely comments on the arts, lifestyle and entertainment. More about badges | Request a badge Washingtologist Badge

Kitchen Helpers - StumbleUpon I found these helpful charts last week and just had to share! Both of these beauties are from Chasing Delicious (aka one of the most fab foodie blogs out there)! Aren’t they faaaaabulous?! Buy them here. (Note: There are lots of little charts like this online, but these are my favorites). I love tea, but I’m no expert. Top 10 Ways to Upgrade Your Cat's Life We spend a lot of time talking about how to improve our own lives, but how about the lives of our pets? Today we're looking at ten great ways to improve the life of your cat—which has its benefits for you, too. P The Comfort of Eggs in a Basket Eggs in a basket was the first meal I ever cooked. I was in 5th grade, and it was a Sunday morning at my best friend's house after a sleepover. We woke up hungry, and for some reason his parents weren't home. This confused me--my parents would never do that--but more important than confusion was the fact that I was terribly hungry, and I didn't see how that problem was going to be solved, since his house never had any cereal in it.

Don't Make Dad Settle for Boring Potatoes: Hasselback Potatoes Dad’s going to remember exactly why he loves steak and potatoes when you serve him these. And you (along with the kids, fingers crossed!) will love them, too. Busy Mommy: An Iowa Mom Blog - StumbleUpon A pizza braid is very kid-friendly, easy on the wallet and extremely simple to make. My aunt and cousin first introduced me to them and I’ve been hooked ever since. The possibilities are endless of the varieties you could make (check out the Apple Dessert Braid!), but the recipe below is for a very basic hamburger and pepperoni braid. You could make your own dough, but I prefer the shortcut of using Rhodes rise and bake dough. This is one of my favorite shortcuts to make a nice loaf of bread or use in recipes like this one.

Warm Bacon Potato Salad Recipe Thursday, October 6, 2011 Warm Bacon Potato Salad A couple of years ago, my husband, Scott, asked me to make a potato salad. He’s not a man who asks very often for something so specific, 95% of his requests center around the one-syllable, “meat” so I took his request pretty seriously. I’ve always considered potato salad one of those “filler sides” that come with your lunch order at a deli – it’s cheap, easy to make and generally all taste the same.

Tutorial: Homemade Sidewalk Chalk by Michelle Vackar, Modern Handmade Child One of our favorite outside activities at our home is drawing with chalk on the driveway. You can play hopscotch, four-square, and of course draw and create silly stories. My daughters and I were talking one day as we played hopscotch about how to make chalk and I thought to myself, let’s try it! It ended up being quite a lot of fun. What you will need: • Toilet paper or paper towel tubes • Scissors • Duct tape • Wax paper • Small bucket or disposable container to make the recipe • ¾ cup of warm water • 1 ½ cups Plaster of Paris • 2-3 tablespoons of tempera paint • Paper bag or a “mess mat”