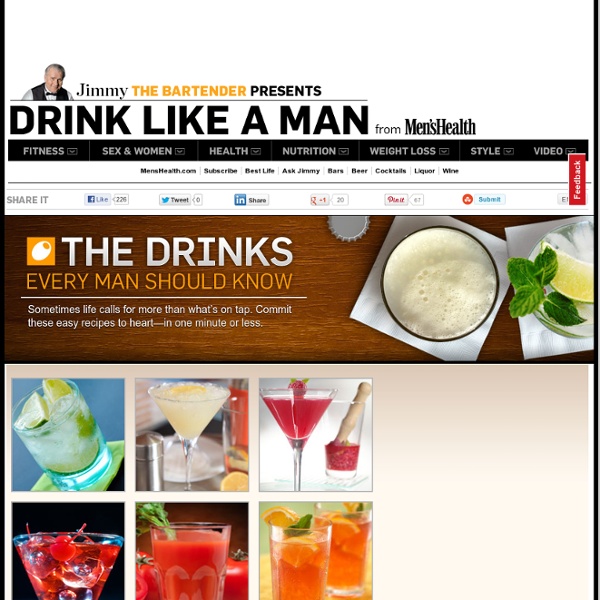 ...stumbled upon yesterday was a list of interesting drinks. I told you guys that I'm wasting a lot of time nowadays looking at pretty pictures and interesting ideas on Pinterest.I already have a bunch of different boards for all kinds of stuff - be it food or interior design. But I especially liked the idea of someone making up Harry Potter related drinks. And then I googled the term and came up with a bunch of interesting stuff. So I'm going to share only a couple of them with you guys (I know that this won't be the favorite topic of a bunch of you, but check them all out.

How to Make Caramel Apple Shots Photo: Michelle Oddis Once in a while, a party trick comes along that grabs our attention. Food blogger Michelle Oddis of That's So Michelle loves making caramel apple shots we can't imagine anyone would turn down. Using, wait for it, real fruit and time-tested formulas for tasty, jiggly shots that stay put in their edible "shotglasses," Michelle's gotten Food Republic on the gimmicky Halloween bandwagon we've been resisting so fiercely. Try out these irresistible boozy apple treats (and don't hold your breath for a candy corn cocktail on our end). Here's what you'll need:

Limoncello Recipe Limoncello While searching for a good recipe for Limoncello, I found a lot of conflicting information. Some recipes use vodka, others use grain alcohol (without specifying the potency, which varies) and others even used rum! The alcohol-to-water-to-sugar ratios also varied widely, and it made me wonder if people had typos in the recipes, or were just posting a recipe they had never even tasted! So I started with the premise that grain alcohol will extract the most lemon oil and flavor from lemon zest. Then I adjusted the water and sugar levels until I had a recipe where I liked the potency and the sweetness balances the tartness of the lemon. True Facts #1 - StumbleUpon Facts - interesting, provocative, well-seasoned One out of ten children in Europe are conceived on an IKEA bed. Antarctica is the only continent without reptiles or snakes.

Cocktails - Information is Beautiful 75+ classic cocktail recipes from the International Bartender’s Association’s list of drinks every bartender should know. Forget old-school measures like ml and oz. We’ve calculated our own universal metric. The Visual Miscellaneum One of the best perks of blogging here is all the free stuff people send me. Like, today, for instance, I opened my mail and found one of the more attractive books I've ever laid eyes on. It's by David McCandless and it's called The Visual Miscellaneum, a Colorful Guide to the World's Most Consequential Trivia. (Right up our alley, eh?) McCandless is a London-based writer and graphic designer who thinks the best way to absorb information is by mapping facts in colorful and cool/quirky ways. So you've got things here like a consensus cloud called Books Everyone Should Read (happy to see Catch-22 is the largest/darkest in the cloud), and a "Better Than Bacon" chart, which shows the faces of a series of actors who are way better connectors for the game SDoKB than Bacon himself.

How to Travel Full-Time for $17,000 a Year (or Less!) Wise Bread Picks For the last five years, I've been traveling the world full-time, and for less money than I've ever spent (and I'd wager less money than most people would spend) to live in one place. My worldly possessions fit into one bag (just larger than carry-on size) and a backpack containing my laptop and computer gear. This small entourage (weighing less than 45 pounds in total) comes with me as I wander around the world, sometimes quickly, but mostly slowly.

7 Videogame Cocktail Recipes From The Drunken Moogle See more videogame recipes at The Drunken Moogle. And submit your own drink recipe to the Dorkly Facebook page for consideration! Metroid (Metroid Cocktail) Ingredients:1/2 shot Bacardi Big Apple Rum1/2 shot Coconut Rum1/2 glass Kiwi Strawberry Minute Maid (or Kool-Aid)A little less than 1/2 a glass Sprite3 Strawberries Directions: Shake the two rums and Kiwi Strawberry Minute Maid and pour into a lowball glass. Add the Sprite for a bit of flavor and carbonation. Drop in three strawberries as a garnish. Videos Smosh Video about 8 hours ago Ian and Anthony want to have adventures like Finn on Adventure Time, so they head out and FIND adventure on their own. Saving princesses and challenging villains looks so easy in the cartoon! 15 Insanely Dangerous Cocktails We Dare You To Try This New Year Some of the most iconic cocktails which the world has come to know of are either too sweet or too flashy, politely missing the point of a cocktail altogether. A cocktail should ideally be a mixture of three ingredients out of which two are pure alcohols. Here, however, we might play loose with the principle definition. Your most humble author has tried his very best to break down the ingredients to their very core for your earnest perusal. So, here are some of the most intoxicatingly potent cocktails and their recipes which we dare you to try this New Year.