Self-employed Updates. Below is a list of news and updates about self-employment, entrepreneurship and independent contracting from around the world. 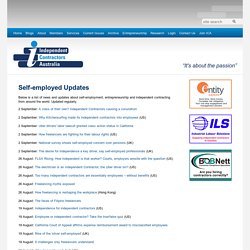 Updated regularly. Independent Contractors Australia - "Be Proud of Yourself" How Freelancers Are Fighting For Their Labor Rights. "On average, our members are owed over $10,000 in unpaid invoices and spend 36 hours tracking down each missing payment," says Freelancers Union founder and labor lawyer Sara Horowitz. 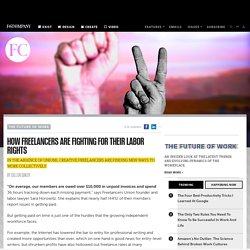 She explains that nearly half (44%) of their members report issues in getting paid. But getting paid on time is just one of the hurdles that the growing independent workforce faces. For example, the Internet has lowered the bar to entry for professional writing and created more opportunities than ever, which on one hand is good news for entry-level writers, but shrunken profits have also hollowed out freelance rates at many publications.

Stagnant rates and late payments are just a couple of the many frustrations currently facing the growing freelance community. First, there's a tax system that punishes the self-employed—which some classify as double taxing. While some freelancers have built successful careers despite these challenges, these significant problems only seem to be getting worse. About $200K Freelancer. Elizabeth MacBride and Elaine Pofeldt started $200K Freelancer in 2011 to help ambitious professionals make the most out of the big opportunity in today’s economy: working for yourself. 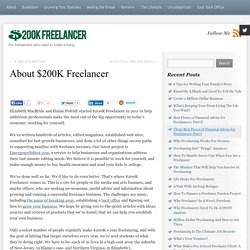 We’ve written hundreds of articles, edited magazines, established web sites, consulted for fast-growth businesses, and done a lot of other things on our paths to supporting families with freelance incomes. Our latest project is EmergencyEditor.com, a service to help businesses and organizations address their last-minute editing needs. We believe it is possible to work for yourself, and make enough money to buy health insurance and send your kids to college. We’ve done well so far. Labor Board Ruling Eases Way for Fast-Food Unions’ Efforts. Photo WASHINGTON — The National Labor Relations Board, in a long-awaited ruling, made it easier on Thursday for unions to negotiate on behalf of workers at fast-food chains and other companies relying on contractors and franchisees. 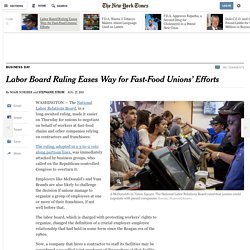 The ruling, adopted in a 3-to-2 vote along partisan lines, was immediately attacked by business groups, who called on the Republican-controlled Congress to overturn it. Employers like McDonald’s and Yum Brands are also likely to challenge the decision if unions manage to organize a group of employees at one or more of their franchises, if not well before that.

The labor board, which is charged with protecting workers’ rights to organize, changed the definition of a crucial employer-employee relationship that had held in some form since the Reagan era of the 1980s.

NO!SPEC. Guardian US staff vote to unionise. Staff working at Guardian US will unionise under the News Media Guild after a vote was passed unanimously in favour of collective representation on Wednesday. 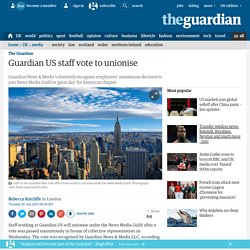 Public Says Workers in Many Sectors Should Be Able to Unionize Survey Report Over the past three decades, the share of wage and salary workers in the United States who belong to labor unions has fallen by about half. 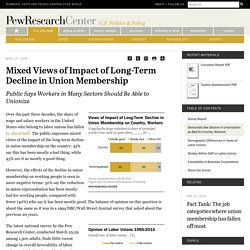 The public expresses mixed views of the impact of the long-term decline in union membership on the country: 45% say this has been mostly a bad thing, while 43% see it as mostly a good thing. However, the effects of the decline in union membership on working people is seen in more negative terms: 52% say the reduction in union representation has been mostly bad for working people, compared with fewer (40%) who say it has been mostly good. The balance of opinion on this question is about the same as it was in a 1994 NBC/Wall Street Journal survey that asked about the previous 20 years.

Discovering The Unexpected Marriage Of Commerce And Advocacy. As so often happens when we set out to do big things, when I set out to create what would ultimately become the Freelancers Union, I didn’t know exactly what I was doing. 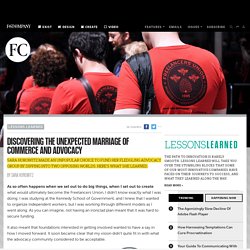 I was studying at the Kennedy School of Government, and I knew that I wanted to organize independent workers, but I was working through different models as I went along. As you can imagine, not having an ironclad plan meant that it was hard to secure funding. It also meant that foundations interested in getting involved wanted to have a say in how I moved forward. It soon became clear that my vision didn’t quite fit in with what the advocacy community considered to be acceptable. 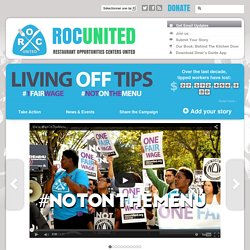 We need your help. Monday 13 Oct 2014 10/14: #NOTONTHEMENU National Day of Action Find and join a rally near you! Wednesday 8 Oct 2014 10/14: NOT ON THE MENU - NYC Rally Against Sexual Harassment! Women’s rights leaders, community activists, and restaurant workers are headed to City Hall Plaza this Tuesday at 11am to rally against sexual harassment in the restaurant industry!