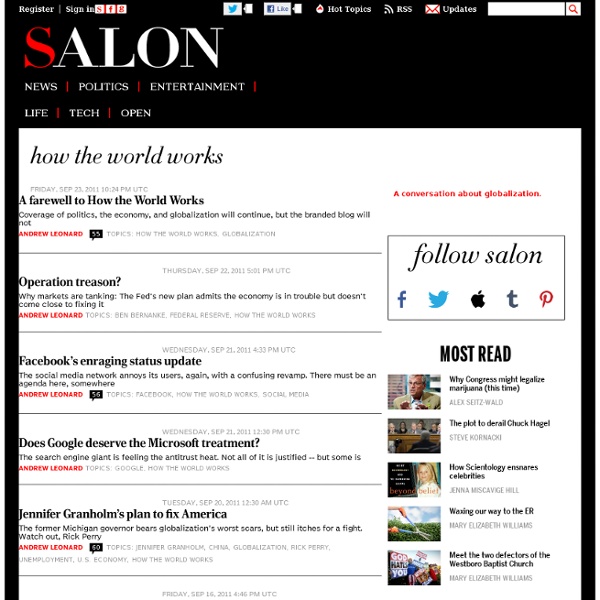 The Poor Will Inherit the Earth - By Uri Dadush and William Shaw A generation ago, developing countries only hit the economic headlines when a Latin American country defaulted or a Saudi minister announced a new oil price target. The Soviet empire still lorded over Eastern Europe; China and India remained largely closed to the world; and conflict, disease, and corrupt regimes kept sub-Saharan Africa's population mired in poverty and economic isolation. But today, developing countries are propelling the world economy. Already, four (China, India, Russia and Brazil) of the seven largest economies are developing countries. Thirty years of 10 percent annual growth has transformed China from a poor, agrarian economy to an industrial giant and the world's second-largest economy. In Juggernaut: How Emerging Markets Are Reshaping Globalization, we predict that, in the next generation, Japan and Germany will fall further behind and the United States will be the only advanced country to rank among the world's seven largest economies Feng Li/Getty Images

The wrong John Wayne Rep. Michele Bachmann kicked off her presidential campaign on Monday in Waterloo, Iowa, and in one interview surrounding the official event she promised to mimic the spirit of Waterloo’s own John Wayne. The only problem, as one eagle-eyed reader notes: Waterloo’s John Wayne was not the beloved movie star, but rather John Wayne Gacy, the serial killer. Mrs. Bachmann grew up in Waterloo, and used the town as the backdrop for her campaign announcement, where she told Fox News: “Well what I want them to know is just like, John Wayne was from Waterloo, Iowa. That’s the kind of spirit that I have, too.” John Wayne, the movie legend, is in fact from Iowa and the John Wayne birthplace is a celebrated landmark — only it’s in Winterset, which is a nearly three hour drive away from Waterloo. He would move back to Illinois, where his killing spree started, and lasted about six years. The Bachmann campaign sent this explanation: “John Wayne is from Iowa, his parents lived in Waterloo.”

Jeffrey Sachs: How the Wall Street Journal Distorts the Truth About Taxes The Wall Street Journal is the leading mouthpiece for cutting taxes for the rich. The Journal editorial board is fully in the service of that cause. An editorial at the start of this week ("Where the Tax Money Is," April 18, 2011) is a vivid case in point. I direct readers to the "Summary of Latest Federal Income Tax Data" presented by the Tax Foundation, October 6, 2010, No. 249. Consider the top 1% of taxpayers. The Journal writes that it is impossible to get enough income out of the top 1% to close the deficit, and invites us to undertake the "thought experiment" of taxing all of the income this group. If the tax rate were 100% rather than 23% (and assuming in the Journal illustration an unchanged AGI), the extra revenues would be $1,300 billion, or 9 percent of GDP. With great bravado, the Journal claims that even the income of the top 10% of the taxpayers wouldn't close the deficit. The real point is obvious.

140 Characters Is Enough For A Lawsuit Tweet now, be sued later? A fashion designer sued Courtney Love over tweets Love posted following a dispute between the two ("You will end up in a circle of corched eaeth hunted til your dead," the singer wrote). Demi Moore and Perez Hilton traded lawyers letters after a series of tweets in which Moore accused Perez of flouting child pornography laws in posting and commenting on a picture of her daughter and the blogger said Moore was a bad mother. The BitCoiners Strike Back Even if hypothetical where a "hacker" could create fraudulent Bitcoins, how in the world is that potentially more inflationary than our current fiat system with a "discretionary" monetary policy? It might not be more inflationary than every real or imaginable monetary policy of central banks. But it certainly has the potential to be more inflationary than the fiat money of the United States has proven to be. We have a long history of Federal Reserve notes. There is no similar history for BitCoins. What's more BitCoins exhibit far more volatility than dollars. Sunday's hacking took place on an exchange—a better analogy would be blaming grain growers for a faulty product if there were a problem at the commodity exchange. Actually, the best analogy would be a stock traded on an exchange. Why would you say it isn't a currency? It doesn't behave like a currency. Look, money is mostly useful for exchange purposes. Maybe not. Questions?

High schooler challenges Bachmann to debate on U.S. Constitution | Minnesota Independent: News. Politics. Media. A high school sophomore from New Jersey is challenging Rep. Michele Bachmann to a debate on civics and the U.S. Constitution. In an open letter to Bachmann, Amy Myers of Cherry Hill, N.J., said, “I have found quite a few of your statements regarding The Constitution of the United States, the quality of public school education and general U.S. civics matters to be factually incorrect, inaccurately applied or grossly distorted.” “I, Amy Myers, do hereby challenge Representative Michele Bachmann to a Public Forum Debate and/or Fact Test on The Constitution of the United States, United States History and United States Civics,” Myers wrote, according to a report by City Pages’ Nick Pinto . Politifact rated Bachmann’s statements about the U.S. Here’s Myers full letter: Dear Representative Bachmann, My name is Amy Myers. Sorry, the comment form is closed at this time.

Why is it so hard to raise taxes on the rich? - Barack Obama News In his speech on the budget Wednesday afternoon, President Obama finally came out unequivocally in support of higher taxes for the rich. As many commenters have pointed out, taxing the rich is a no-brainer for progressives, the rare proposal that’s politically popular in addition to being good policy. So why has it taken so long for Democrats to make a push for increasing the highest marginal tax rates? A study by Princeton political scientist Larry Bartels provides some insight. Of course, it’s not exactly news that the rich are politically powerful, but even so, the estimates of just how much power they hold can be staggering. To see how far the debate has shifted, you just need to look at what’s on the table in the current showdown: Progressives are asking to increase the top two tax brackets from 33 and 35 percent to 36 and 39.6 percent, while Paul Ryan’s “Pathway to Prosperity” proposes cutting taxes in the highest bracket to 25 percent.

Enterprise Resilience Management Blog: Litigating the Past There is an old joke that if you want to be competitive with a country like China all you have to do is send over a 1,000 lawyers and let them go to work -- the cost of China's goods will surely rise. The U.S. certainly has lawyers to spare. A decade ago BusinessWeek reported that Japan had only 16,800 licensed lawyers compared to 900,000 in the U.S. "In suits against Dole Food, Nicaraguan courts awarded $2.2 billion in damages to workers claiming they were made sterile by exposure to the pesticide DBCP on Dole banana farms in the 1970s. Dole may or may not have clean hands in this matter. "Shell denies any wrongdoing. Shell was likely willing to settle because the trial that was to be held in New York was going to accuse the company of "crimes against humanity" according to Mouawad. "The payout could also spark further court battles invoking the same American law, the Alien Tort Claims Act of 1789, originally intended to counter piracy, under which the Shell case was brought.