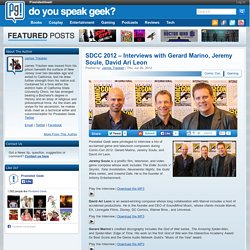 Jeremy Soule is a prolific film, television, and video game compose whose work includes The Elder Scrolls V: Skyrim, Total Annihilation, Neverwinter Nights, the Guild Wars series, and Icewind Dale. He is the founder of Artistry Entertainment. Play the Interview | Download the MP3 David Ari Leon is an award-winning composer whose long collaboration with Marvel includes a host of acclaimed productions. Play! A Video Game Symphony Interview with Jeremy Soule. Jeremy Soule is the award winning composer of several of the most well known games over the past ten years. 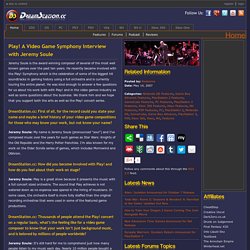 He recently became involved with the Play! Symphony which is the celebration of some of the biggest hit soundtracks in gaming history using a full orchestra and is currently touring the entire planet. He was kind enough to answer a few questions for us about his work both with Play! World Of Musicraft: Jeremy Soule. Www.tauniverse.com/articles/interviews/soule.html. Jeremy Soule is the award-winning composer of both the TA and TA: Kingdoms soundtrack. 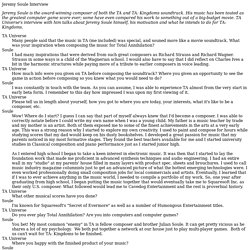 His music has been touted as the greatest computer game score ever; some have even compared his work to something out of a big-budget movie. TA Universe's interview with him talks about Jeremy Soule himself, his motivation and what he intends to do for TA: Kingdoms. TA Universe Many people said that the music in TA (me included) was special, and souned more like a movie soundtrack. What was your inspiration when composing the music for Total Annihilation? Jeremy Soule. Hi Jeremy, thank you very much that you are at our disposal for an interview, and with this we hope to sharpen the sense of the people to pay attention to the music in computer games a little bit. 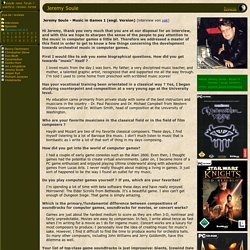 Therefore we addressed a master of this field in order to get to know a few things concerning the development towards orchestral music in computer games. First I would like to ask you some biographical questions. How did you get towards "music" itself ? I loved music from the day I was born. My father, a very disciplined music teacher, and mother, a talented graphic artist, recognized that and supported me all the way through. Has your vocational training been orientated in a classical way ? My education came primarily from private study with some of the best instructors and musicians in the country - Dr. Who are your favorite musicians in the classical field or in the field of film composers ?

Haydn and Mozart are two of my favorite classical composers. An Interview with JEREMY SOULE - April 2002: Northern Sound Source. Jeremy Soule On The Music Of Guild Wars: Eye of the North. Share. 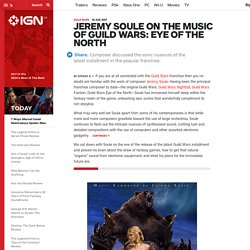 Composer discussed the sonic nuances of the latest installment in the popular franchise. By Spence D.If you are at all connected with the Guild Wars franchise then you no doubt are familiar with the work of composer Jeremy Soule. Jeremy Soule Talks Music And Games With X-Play. You may have heard of Jeremy Soule; he's one of the most prolific musical composers around the video game industry. 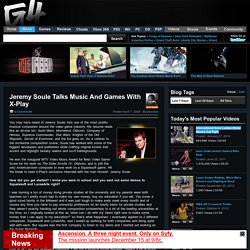 His resume reads like an all-star list: Guild Wars, Morrowind, Oblivion, Company of Heroes, Supreme Commander, Star Wars: Knights of the Old Republic, Secret of Evermore, and the list goes on. As a veteran to the orchestral composition scene, Soule has worked with some of the biggest developers and publishers while crafting original scores that accent and highlight fantasy realms and sci-fi battlegrounds. He won the inaugural MTV Video Music Award for Best Video Game Score for his work on The Elder Scrolls IV: Oblivion, and is still the only American-born composer to ever work on a Squaresoft game. MMORPG.com Podcast. SOE Live 2014: Discussing EQN and Landmark music with Jeremy Soule. Who wouldn't want to talk with Jeremy Soule? 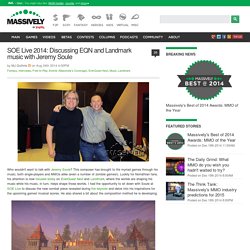 This composer has brought to life myriad games through his music, both single-players and MMOs alike (even a number of zombie games!). Luckily for Norrathian fans, his attention is now focused solely on EverQuest Next and Landmark, where the worlds are shaping his music while his music, in turn, helps shape those worlds. Insider Interview with Composer Jeremy Soule. Share. 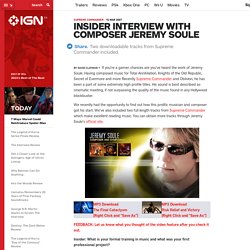 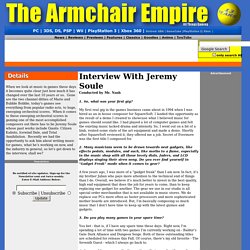 Nash 1. So, what was your first gig? My first real gig in the games business came about in 1994 when I was hired as an in house composer for SquareSoft. I landed this opportunity as the result of a demo I created to showcase what I believed music for games should sound like. 2. A few years ago, I was more of a "gadget freak" than I am now. 3. You bet - that is, if I have any spare time these days. 4. For Julian and I, arriving at this goal will always be a work in progress. 5. It is much harder to compose music for entertainment that's interactive. 6. Just as in film, all of a game's components - the graphics, music, sound effects, movements, characters, etc. - must work together to appeal to all of a player's senses. 7. I try to take a little time off between projects, maybe four or five days, to reset myself. 8.

I would love to write music for any game created by Donkey Kong, Yoshi and Zelda designer Shigeru Miyamoto. 9. Interview with Jeremy Soule: zOMG! and More. Hopefully, you already know the name Jeremy Soule. 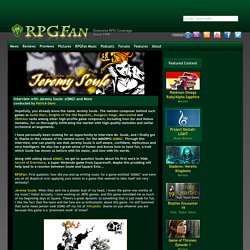 The meister-composer behind such games as Guild Wars, Knights of the Old Republic, Dungeon Siege, Morrowind and Oblivion ranks among other high-profile game composers, including Inon Zur and Nobuo Uematsu, for so thoroughly infiltrating the market with high-quality melodies and stellar orchestral arrangements. I have personally been looking for an opportunity to interview Mr. Database Error. Future Music. Rarity Guide Interview with Jeremy Soule at San Diego Comic Con 2012. Jeremy Soule (Person) No recent wiki edits to this page. Overview Jeremy Soule is an award-winning composer for video games, movies and TV. He is best known for his work in the Elder Scrolls and Guild Wars games and providing the soundtrack for many successful CRPGs in the early 2000s. He pioneered the use of orchestral symphonies in strategy games with his Total Annihilation score. He also composed for many games in the Harry Potter series, which have earned him multiple BAFTA nominations and a win.

Meet Skyrim composer Jeremy Soule’s first symphony. Jeremy Soule's Skyrim soundtrack was one of my favorites in recent memory. I've been a huge fan of his work since he entered the videogame industry with his soundtrack to Secret of Evermore at the young age of 19, and he's since gone on to score some of the biggest games in the medium, including Guild Wars, Harry Potter, and The Elder Scrolls. He's now taking the next step in his career by attempting to write a classical symphony titled The Northerner which will be released on CD. As the name would suggest, the piece is inspired by the same energies he focused on while writing the soundtrack to Skyrim, although it’s not directly related. Along with the announcement, Soule has launched a Kickstarter campaign to fund the project with a modest goal and some great rewards. We've been fortunate enough to have an exclusive chat with Soule regarding The Northerner and also have an exclusive sample for you to hear. 1) A soundscape similar to Skyrim 2) Kickstarter as a shared investment in art.

Capturing the dragon: the music of Jeremy Soule. It could've been over-inflated tyres combined with the rain on the road and a rogue gust of wind coming in off the Pacific Ocean, but the exact cause of the accident may never be known. Regardless, as Jeremy Soule's car hydroplaned into the oncoming traffic on Insterstate 5 that night, as the headlights rushed out of the darkness towards him and as his car began to roll, the only thought in his mind was that he didn't want anyone else to be hurt. "You really see things in a profound sort of way, as you're hurtling at highway speeds into oncoming traffic," says the composer, who found himself accepting that these might be his final moments. "I knew that if I died that night, I felt satisfied in the direction I was going with my life.

That was odd, because being a perfectionist I'm never satisfied. " Jeremy Soule, whose work creating soundtracks for video games has won him a host of awards from organisations that include BAFTA and MTV, doesn't say that his life flashed before him. EverQuest Next - Interviewing Composer Jeremy Soule on Scoring Norrath. Capturing the dragon: the music of Jeremy Soule, a profile on Eurogamer (plus some additional quotes I couldn't fit into the feature) Jeremy Soule - Oblivion Atmosphere. Interview with Jeremy Soule at San Diego Comic 2012. Jeremy Soule's thoughts on videogames. Composing Skyrim's Theme. The Music of Skyrim on Top Score. August 8, 2012 Dragon Mountains The mountains of Skyrim behind a dragon. (Bethesda Softworks LLC) Copy and paste the HTML below to embed this audio onto your web page. Audio player code: St. Sadly, Jeremy does not do interviews, but his music deserves a listen. Firstly, I urge you to look at accompanying slideshow, then imagine them on a 41" LCD screen, with the ability to wander freely wherever you'd like to go.

If you're unfamiliar with The Elder Scrolls V: Skyrim, allow me to explain a handful of the reasons that draw millions of us to the province. Interview with Jeremy Soule: zOMG! and More. Hopefully, you already know the name Jeremy Soule. The meister-composer behind such games as Guild Wars, Knights of the Old Republic, Dungeon Siege, Morrowind and Oblivion ranks among other high-profile game composers, including Inon Zur and Nobuo Uematsu, for so thoroughly infiltrating the market with high-quality melodies and stellar orchestral arrangements.

I have personally been looking for an opportunity to interview Mr. Soule, and I finally got it, thanks to the release of his newest score, for the MMORPG zOMG!. Through this interview, one can plainly see that Jeremy Soule is self-aware, confident, meticulous and very intelligent. He also has a great sense of humor and knows how to have fun, a trait which Soule has shown us before with his music, and now with his words. Jeremy Soule Interview & PLAY! Introduction. Www.GameInformer.com. SDCC 2012 – Interviews with Gerard Marino, Jeremy Soule, David Ari Leon.