McDonald's: you can sneer, but it's the glue that holds communities together. Vegans of Color and Respectability Politics: When Eurocentric Veganism is Used to Rehabilitate Minorities – Aphro-ism. By: Aph Ko This is a screen shot of an article. 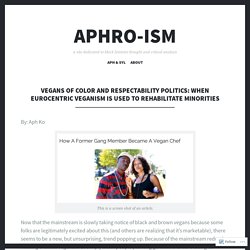 Now that the mainstream is slowly taking notice of black and brown vegans because some folks are legitimately excited about this (and others are realizing that it’s marketable), there seems to be a new, but unsurprising, trend popping up. Because of the mainstream reductive framing of black veganism as simply black people planting gardens and advocating for animal rights (rather than a socio-political movement that uses the black social experience as a launching pad for re-articulating animal oppression), there seems to be an unfortunate air of respectability politics emerging from mainstream stories about black vegans and other vegans of color.

Dismantling White Veganism – veganvoicesofcolor. Veganism in and of itself is the practice of abstaining from the use and exploitation of animals as far as practical. 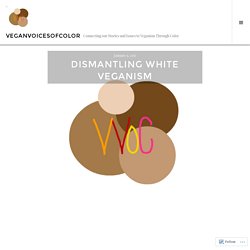 Veganism rejects the mainstream narrative that animals are here for us to use in whatever way we choose, from dietary consumption to attire to experimentation. It is a rejection of the carnist and speciesist mindset and calls for justice and liberation of animals. White Veganism is a reference to mainstream veganism—which is, undeniably very white, narrow, one sided and ignores intersectionality.

It aims to expose and erase the invisibility of oppression on other animal bodies to the masses, while simultaneously ignoring and being silent about the very visible injustice and oppression of black and brown bodies, femme bodies, or differently-abled bodies. Sometimes even utilizing the history of oppression on Black bodies and other oppressed groups as a tool to promote veganism. Animal liberation cannot succeed through white veganism. 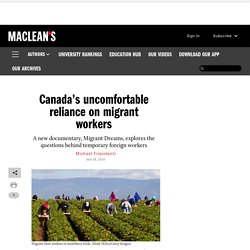 (Mark Miller/Getty Images) A few months ago, a construction worker named Brian Fernandez was grocery shopping in Orillia, Ont., surveying the ketchup selection. How Warren Buffett’s Son Would Feed the World. When his three children were young, Warren Buffett installed a dime slot machine on the third floor of the family’s house, in Omaha, Nebraska. 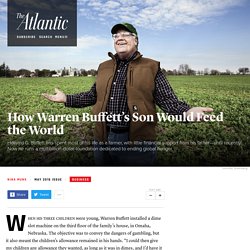 The objective was to convey the dangers of gambling, but it also meant the children’s allowance remained in his hands. “I could then give my children any allowance they wanted, as long as it was in dimes, and I’d have it all back by nightfall,” he remarked once at a Berkshire Hathaway annual meeting. Buffett—who, despite being worth about $60 billion, has lived for 58 years in that same relatively modest house, for which he paid $31,500 in 1958—once told Fortune magazine that he intended to leave his three children “enough money so that they would feel they could do anything, but not so much that they could do nothing.”

He added that “a few hundred thousand dollars” sounded about right. Migrant Dreams (Feature Version) Canadian Farmer's Almanac predicts icy cold, snowy winter - Toronto. According to the Canadian Farmers' Almanac, this winter is going to be icy cold and snowy. 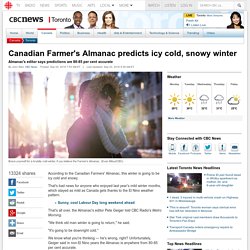 That's bad news for anyone who enjoyed last year's mild winter months, which stayed as mild as Canada gets thanks to the El Nino weather pattern. BOYCOTT WENDY'S. These heartland conservation heroes defy stereotypes. They’re probably not who you think of as environmental conservationists: Western ranchers, Midwestern crop growers, fishermen who make their livelihoods along the Mississippi River and Gulf Coast. 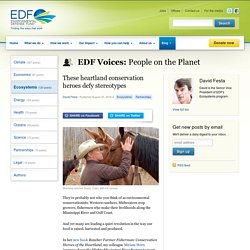 And yet many are leading a quiet revolution in the way our food is raised, harvested and produced. Rush Limbaugh Warns That Federally Paid 'Lesbian Farmers' Could Invade Your Town. Everyone's favorite pill-popping conservative radio personality Rush Limbaugh is convinced that President Obama is funneling money to the lesbian community. 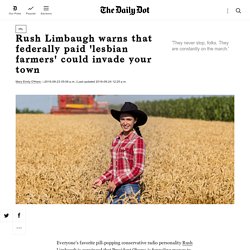 Why? To train them all to become farmers and invade conservative red states, of course. “Have you heard about the Agriculture Department’s financial grants to lesbian farmers? " asked Limbaugh on the Aug. 17 airing of his Rush Limbaugh Show on the Premiere Radio Network. Arviat, Nunavut Young Adults Are Learning To Grow Their Own Produce.

Vegetables aren't hugely popular in the northern community of Arviat. 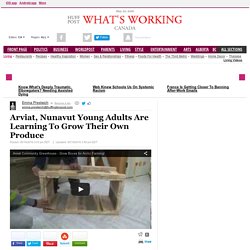 The Hidden Labor Behind Food: How to 'Read' a Tomato. The creator of a new documentary outlines how closely farmworkers' lives are connected to what's on grocery-store shelves By Heart is a series in which authors share and discuss their all-time favorite passages in literature. 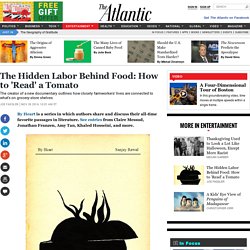 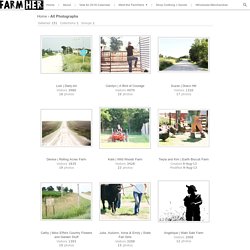 Why this Nigerian chose rural farming over a suit and tie. Farm Confessional: How to Tell People You've Decided to Become a Farmer. Canada’s uncomfortable reliance on migrant workers. Stop Supporting Child Slavery By Avoiding These 7 Companies. Who doesn’t love chocolate? Americans sure do. In fact, the average American citizen eats over 11 pounds of chocolate each year. But there’s a downside to this sweet treat beyond simply questionable ingredients. What It Was Like Working at One of Kingston’s Prison Farms.

Kingston prison photo via Wikimedia Commons There are the classic things everyone knows you learn in prison—how to make alcohol out of your toilet tank, how to turn someone's toothbrush into a tattoo gun—and then there are the less conventional skills you can pick up while doing time. I mean sure, you get a university degree, but did you know women inmates in California can also train to be firefighters? In Canada, for more than a century, unlikely inmate pursuits included riding on tractors, milking cows and feeding chickens. Up until 2010, six institutions put convicts to work on government-run prison farms that fed inmates across the country. How Women Farmers are Changing U.S. Agriculture.

Women now account for 30 percent of the farm operators in the U.S., a number which has almost tripled in the last three decades, creating the fastest growing segment in agriculture. But beyond the numbers, women are at the forefront of an important shift in today’s farm landscape. Namely, women tend to farm on smaller pieces of land, grow diverse crops, favor sustainable practices, and prioritize food over commodity crops. In their new book, The Rise of Women Farmers and Sustainable Agriculture, a quintet of authors—Carolyn Sachs, Mary E.