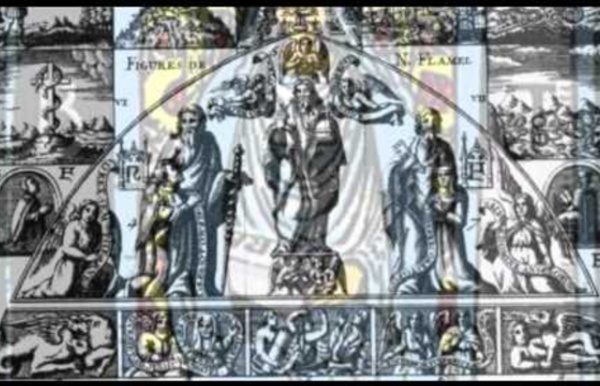 Gnosis - Supernatural Tarot | Documentary Star Fire Laurence Gardner is his excellent book, Genesis of the Grail Kings [Bantam Books, New York, 1999] asks the reason for Genesis 9:4: “But flesh with the life thereof, which is the blood thereof, shall ye not eat.” Why, for example, would Jehovah oppose the intake of blood, while allowing his worshipers to eat flesh (which ultimately, of course, contains a certain amount of blood)? What would be the appeal of eating blood, if not due to some religious or philosophical belief? Better yet, why bother to specifically dictate a law -- early in Genesis -- that forbid the practice? With regards to the Star Fire (as well as the ORME, ORMUS, White Powder of Gold, Philosopher’s Stone, Elixir of Life, Food of the Gods, the Ark of the Covenant, Alchemy, Secrets, Transmutation, Biological and otherwise, and, of course, giving my regards to Broadway), there is a new kid on the block, a new development that really must be noted. One possible answer involves the apparent longevity of the Anunnaki race.

The Multidimensional Human There is evidence to suggest that other worlds or dimensions exist just beyond the range of our normal perception, but we remain unaware of them because our minds are not objectively conscious at these higher levels. Our normal level of consciousness is restricted in some way, preventing us from tuning in to these subtler realms. If you have young children you might have noticed them looking a things that don't appear to be there or talking to "imaginary friends". Very young children can actually see into these hidden worlds, but they lose the ability as they grow older. In altered states of consciousness the censorship of the physical mind ceases. What am "I"? Dr Evan Harris Walker, author of The Physics of Consciousness, is regarded as one the pioneers of the modern consciousness research. In his book World of Psychic Research, Hereward Carrington describes how Dutch scientists succeeded in weighing the physical body before, during and after out-of-body experiences. Human Experience

The Science of Vampirism: Part VI Like a reptile (or corpse), a vampire's core body temperature depends largely on its surrounding environment. They aren't completely cold-blooded, however, as they will still shiver and produce heat to keep their temperature at a bare minimum of about 60 degrees Fahrenheit (compared to over 98 for humans). This proved to be a great help for modern vampire hunters, as it made vampires easily distinguishable from humans when viewed through infrared imagery. Thanks to an additional set of enzyme systems that activate and deactivate at different temperatures, vampires can function at a wider range of body core temperatures than humans and other mammals. Because their body temperature is dependent on environment and they are unable to bask in the sun like reptiles can, sick vampires cannot experience or induce fevers to slow the growth of harmful infections, but the natural antibiotics in their bodies more than fulfill this purpose. Reproductive Organs & Sexuality Aging & Life Expectancy

Angels and Demons of the Law of Attraction: The Philosophy and the Keys to Heaven’s Gates | Good News Guardian This article is our second in a series about the Illuminati and the Law of Attraction, and was last updated July 9th, 2014. The Illuminati was founded in 1776 and sought to overthrow all the governments of the world and install secular governments (meaning: without God) in their place. The secular government of the United States of America was formed the same year and has the Illuminati symbol as it’s great seal on the back of every dollar. It would help to read the first article here which explains how we all use the Law of Attraction all the time. I apologize for the length of this article. To understand how the Law of Attraction works we’ll need to start at the beginning: In the beginning God created the heavens and the earth. Angels and Demons are not physical or corporeal, but are still very real – more real than the physical world we see. One of the countless ways God can create is similar to how we humans can: manifestation. The tree of life and the chain of manifestation

THE MK-ULTRA FILES - iDISCLOSE PROJECT - DOSSIER 1 - WHITNEY HOUSTON - RATED ADEPT As the case of Michael Jackson, Whitney Houston has become more valuable to the ILLUMINATI dead than alive. It has been widely reported this evening on Saturday, February 11, 2012 that at 48 years old, our Beautiful Black Songbird Whitney Houston is Dead as reported by publicist Kristen Foster. As of the the time this evening, it has not been reported when, where, how or why she died, and I hope that it is untrue and false. Already, the press is spreading a widespread illusion and image that her biggest DEVIL was herself. “The biggest devil is me. I’m either my best friend or my worst enemy,” Houston told ABC’s Diane Sawyer in an infamous 2002 interview with then-husband Brown by her side. “During the 1960s, the era covered in The Help, legal segregation and economic inequalities limited black women’s employment opportunities. Michael Coard recently wrote in the Philly Post ”Oscar is a Racist” about the Oscars historically “Romancing the Black Mammy” and Black Female Social Misfits.