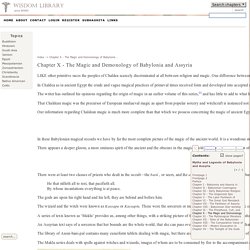 One difference between the priest and the sorcerer was that the one employed magic for religious purposes whilst the other used it for his own ends. The literature of Chaldea—especially its religious literature—teems with references to magic, and in its spells and incantations we see the prototypes of those employed by the magicians of medireval Europe. Directory Listing of /texts/religion.occult.new_age/ What is the relationship between Dr. John Dee and the Necronomicon? Franz Bardon Practice of Magical Evocation. The 5 Best Books for Truly Understanding Magick and the Occult. Here’s the 5 best books to get a deeper understanding of exactly what Magick is My house is almost completely filled with books, a good portion of which are related to magick. 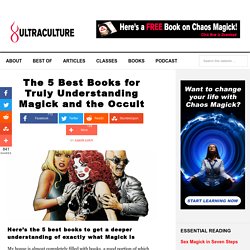 That’s because I spent most of my twenties delving into hard occult theory, to make sure I “got it right.” What I eventually discovered is that there is a huge amount of noise in occult writing, but very little signal. Most occult books are a technique taken from here or there, with a bunch of fluff added to make it big enough to sell on its own. (Frankly, you’ll get far more pure occult information from my free book on chaos magick than a good deal of the occult books in the marketplace.)

To save you the time and headache of having to cobble together an occult library, I’ve provided the core texts below. The 5 (plus one extra) Best Books on Magick No Boundary, Ken Wilber. For convenience, I’ve arranged these books into an organized Amazon list below, along with a bunch of other goodies. (Image from The Invisibles. Franz Bardon's Hermetic Magic. Franz Bardon defines all Universal Manifestation through two distinctions, Mysticism & Magick. 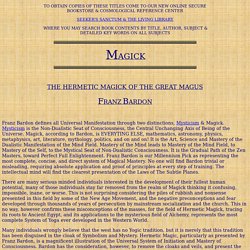 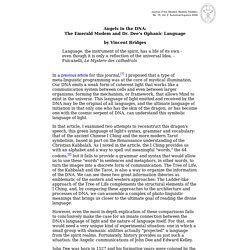 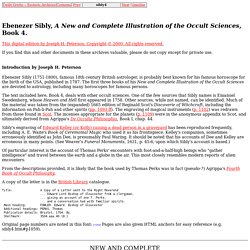 Peterson, Copyright © 2000. All rights reserved. If you find this and other documents in these archives valuable, please do not copy except for private use. Introduction by Joseph H. Peterson Ebenezer Sibly (1751-1800), famous 18th century British astrologer, is probably best known for his famous horoscope for the birth of the USA, published in 1787. The text included here, Book 4, deals with other occult sciences. Sibly's engraving of Edward Kelley (or Kelly) raising a dead person in a graveyard has been reproduced frequently, including A. Of particular interest is the account of Thomas Perks' encounters with foot-and-a-half-high beings who "gather intelligence" and travel between the earth and a globe in the air. Trithemius: The art of drawing spirits into crystals.

In what time thou wouldest deal with the spirits by the table and crystal, thou must observe the planetary hour; and whatever planet rules in that hour, the angel governing the planet thou shalt call in the manner following; but first, say this short prayer: "Oh, God! 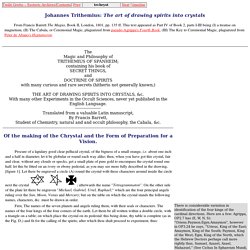 Who art the author of all good things, strengthen, I beseech thee, thy poor servant, that he may stand fast, without fear, through this dealing and work; enlighten, I beseech thee, oh Lord! The dark understanding of thy creature, so that his spiritual eye may be opened to see and know thy angelic spirits descending here in this crystal: (then lay thy hand on the crystal saying,) and thou, oh inanimate creature of God, be sanctified and consecrated, and blessed to this purpose, that no evil phantasy may appear in thee; or, if they do gain ingress into this creature, they may be constrained to speak intelligibly, and truly, and without the least ambiguity, for Christ's sake. 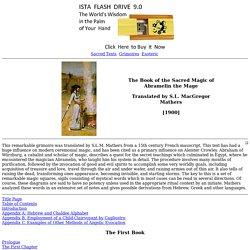 Mathers from a 15th century French mauscript. This text has had a huge influence on modern ceremonial magic, and has been cited as a primary influence on Aleister Crowley. Contacting the Divine. This is basically a rehash of the information I supplied in my earlier post, summoning Baal quick and dirty like. 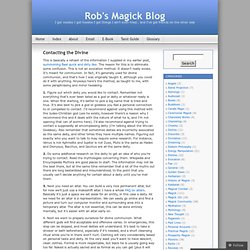 The reason for this is to eliminate some confusion. This is not an evocation method. It doesn’t really evoke. It’s meant for communion. In fact, it’s generally used for divine communion, and that’s how I was originally taught it, although you could do it with anything. 1. 2. 3. Sigillum dei aemeth. Angels in the DNA - Vincent Bridges. Magickal Sites. John Dee. Abramelin_3.