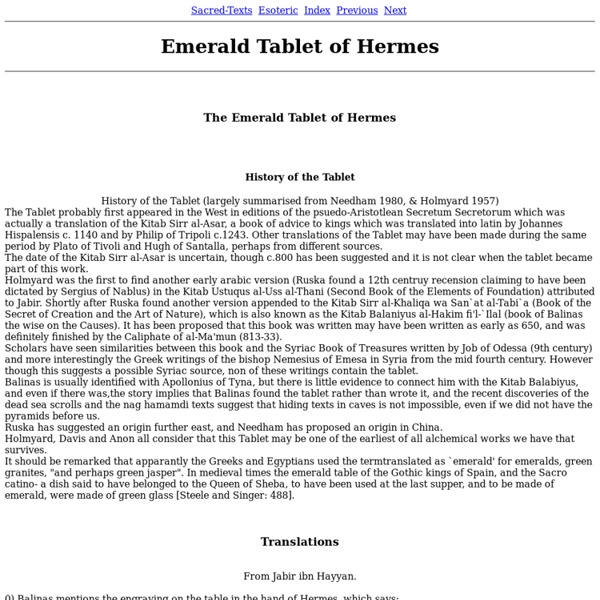 Sacred-Texts Esoteric Index Previous Next The Emerald Tablet of Hermes History of the Tablet History of the Tablet (largely summarised from Needham 1980, & Holmyard 1957) The Tablet probably first appeared in the West in editions of the psuedo-Aristotlean Secretum Secretorum which was actually a translation of the Kitab Sirr al-Asar, a book of advice to kings which was translated into latin by Johannes Hispalensis c. 1140 and by Philip of Tripoli c.1243. Translations From Jabir ibn Hayyan. 0) Balinas mentions the engraving on the table in the hand of Hermes, which says: 1) Truth! Another Arabic Version (from the German of Ruska, translated by ‘Anonymous'). 0) Here is that which the priest Sagijus of Nabulus has dictated concerning the entrance of Balinas into the hidden chamber... Twelfth Century Latin Translation from Aurelium Occultae Philosophorum..Georgio Beato 1) This is true and remote from all cover of falsehood 2) Whatever is below is similar to that which is above. From Idres Shah

Gnostic Teachings T h e E m e r a l d T a b l e t s alchemical archives European witchcraft Belief in and practice of witchcraft in Europe can be traced to classical antiquity and has continuous history during the Middle Ages, culminating in the Early Modern witch hunts and giving rise to the fairy tale and popular culture "witch" stock character of modern times, as well as to the concept of the "modern witch" in Wicca and related movements of "contemporary witchcraft. History[edit] Antiquity[edit] Instances of persecution of witchcraft are documented from Classical Antiquity, paralleling evidence from the Ancient Near East and the Old Testament. In Ancient Greece, for example, Theoris, a woman of Lemnos, who is denounced by Demosthenes, was publicly tried at Athens and burned for her necromancy. In the imperial period, it is evident from many Latin authors and from the historians that Rome swarmed with occultists and diviners, many of whom in spite of the Lex Cornelia almost openly traded in poisons, and not infrequently in assassination to boot. High Middle Ages[edit]

Hermeticism Not to be confused with Hermit. Hermeticism, also called Hermetism,[1][2] is a religious and philosophical/esoteric tradition based primarily upon writings attributed to Hermes Trismegistus ("Thrice Great").[3] These writings have greatly influenced the Western esoteric tradition and were considered to be of great importance during both the Renaissance[4] and the Reformation.[5] The tradition claims descent from a prisca theologia, a doctrine that affirms the existence of a single, true theology that is present in all religions and that was given by God to man in antiquity.[6][7] Many Christian writers, including Lactantius, Augustine,[8] Thomas Aquinas[citation needed], Marsilio Ficino, Giovanni Pico della Mirandola, Giordano Bruno, Campanella, Sir Thomas Browne, and Emerson, considered Hermes Trismegistus to be a wise pagan prophet who foresaw the coming of Christianity.[9][10] History[edit] Late Antiquity[edit] Renaissance[edit] Philosophy[edit] Prisca theologia[edit] "As above, so below."

Adept An adept is an individual identified as having attained a specific level of knowledge, skill, or aptitude in doctrines relevant to a particular author or organization. Etymology[edit] The word "adept" is derived from Latin adeptus 'one who has attained' (the secret of transmuting metals).[1] Authors[edit] H. Although Madame Blavatsky makes liberal use of the term adept in her works[2] to refer to their minor function as caretaker of ancient occult knowledge. Alice Bailey[edit] In Alice Bailey's body of writing she outlines a hierarchy of spiritual evolution and an initiatory path along which an individual may choose to advance. Orders[edit] Various occult organizations have steps in which an initiate may ascend in their own magical system. Hermetic Order of the Golden Dawn[edit] A∴A∴[edit] Aleister Crowley, who formed the A∴A∴, restructured the Golden Dawn system. Temple of Set[edit] The Temple of Set calls their steps degrees, and places adept second. Illuminates of Thanateros[edit] Notes[edit]

Angels Chaos magic The chaosphere is a popular symbol of chaos magic. Many variants exist. For more, see Symbol of Chaos. General principles[edit] Chaos magicians are often seen by other occultists as dangerous or worrisome revolutionaries.[2] History[edit] Origins and creation[edit] This magical discipline was first formulated in West Yorkshire, England in the 1970s.[4] A meeting between Peter J. Influences[edit] Following Spare's death, magicians continued to experiment outside of traditional magical orders. Early days[edit] The first edition of Liber Null does not include the term "chaos magic", but only refers to magic or "the magic art" in general.[6] Texts from this period consistently claim to state principles universal to magic, as opposed to a new specific style or tradition of magic, and describe their innovations as efforts to rid magic of superstitious and religious ideas. Chaos came to be part of this movement defined as "the 'thing' responsible for the origin and continued action of events[...].