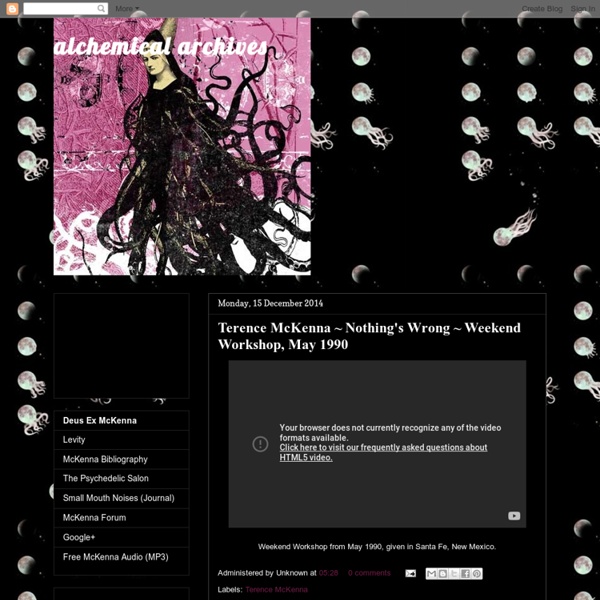 Dreaming Awake At The End Of TimeSan Francisco, December 13, 1998 Join Terence McKenna, author, explorer and philosopher for a think along deconstruction of the deepening worldwide weirdness. With his characteristic hope and humor, McKenna examined time and its mysteries, the nature of language, the techniques of ecstasy, high technology and virtual cyberspace, the role of hallucinogenic plants in shamanism and the evolution of human cultures, and the foundations of post-modern spirituality. The lecture and discussion was didactic, syncretic, challenging, eclectic, eidetic and irreverent intellectual adventure - "for those who have grown weary of Moldevite suppositories and unicorny flimflam! offliberty

Notes from the Psychedelic Salon » Quotes, comments, and audio files from Lorenzo's podcasts Guest speaker: Terence McKennaListen Download Subscribe MP3 Free PCs – Right click, select option Macs – Ctrl-Click, select option Terence McKenna [NOTE: All quotations are by Terence McKenna.] “A psychedelic point of view means a point of view which honors consciousness.” Questioning Our Reality: Alchemy and the Endocrine System This episode is an interview with Jose Barrera "Alchemy and the Endocrine System" and is being released on Friday, May 20, 2011. My interview with Jose was recorded on May 14, 2011. Jose Maria Barrera was born in Bogota, Colombia and came to the United States seventeen years ago to do research in Neuroscience. He is a photographer and creates graphical user interfaces for software applications.

Kerouac's Breakthrough The following is excerpted from The Voice Is All: The Lonely Victory of Jack Kerouac, published by Viking, 2012. On October 7, 1951, after a gloomy Sunday when he seemed to be making no progress on the chapters about Neal Cassady he was adding to On the Road, Jack went to Birdland to hear the alto saxophonist Lee Konitz, who recently had come into his own as a leading innovator of cool jazz. During Konitz's solo in "I Remember April," which he played as if it were "the room he lived in," his music sounded "so profoundly interior" to Jack that he was sure very few people would understand it. In fact, he compared Konitz's extended phrases to the sentences he was writing lately, sentences whose direction seemed mysterious until the "solution" was suddenly unveiled in a way that shed light backward on everything that had preceded it. On October 15, Jack was still in a state of panic when he met Ed White in a Chinese restaurant near Columbia.

RAWIllumination.net Page 13, "we're closer to the pet shop here," to Page 23, "rather close to the Weatherman faction." I'm using quotes as well as page numbers to make things easier for folks who may be using ebooks. -- The Mgt. This is the section in which Saul Goodman and Barney Muldoon begin examining the memos to Joseph Malik, editor of "Confrontation" magazine, giving background to the magazine's mysterious Illuminati project. Most of the references in the memos are quite straightforward, and even now, when interest in the Illuminati seems to be continuing, looking up the references in the memos is a good way to research the alleged secret society. But one of the memos is, well, kind of different.

Periodic Table Database There are hundreds of periodic tables in web space, but there is only one comprehensive database of periodic tables & periodic system formulations. If you know of an interesting periodic table that is missing, please contact the database curator: Dr Mark R Leach. Walter Russell's Periodic Chart of The Elements 1 Walter Russell's Periodic Chart of The Elements 1. Knowledge and civilization Aj Sak Teles, Late Classic Mayan Lord Last night, my friend David pointed out an interesting passage in in search of the miraculous, in which Gurdjieff tells Ouspensky a number of interesting things about the nature of knowledge. Gurdjieff, of course, drew a clear distinction between knowledge and understanding, but this particular passage makes it clear that he, like Ibn Arabi, thought knowledge to be an inestimably valuable substance: an essential factor in the culture of man. The very nearly anti-intellectual stance which one frequently encounters in the Gurdjieff work stands in stark contrast to the appreciation for the intellect which is actually needed in order to conduct any serious spiritual work. This is what interested David, and, of course, it ought to be of great interest to the rest of us, because it certainly does seem as though we are now in such a moment.

SVP Universal Cosmology - Part 9 of 17 - What Vibration Is Figure 9.3 - Compression Wave Conventionally are recognized several wave forms: Compression (which acts as a Longitundinal Wave), Transverse Wave (90° to the Longitundinal Wave) and Raleigh Wave (circular motion 90° to the previous two). Other models of wave activity include the use of metaphors such as coiled springs that compress and expand, penduluums swinging to and fro and various oscillating bodies such as seesaws and water waves. The Intrinsic Taboo Domesticated Dogs, Domesticated Humans Our beloved domesticated dogs differ little genetically from their wild progenitor the Gray Wolf — so little in fact that they are considered the same species despite the significant morphological changes that we see in "man's best friend". Even with the strange mutations that the domestication process has imparted to dogs — traits like exaggerated ears, long curly hair, short legs, flattened snouts, and spotted coats — every dog you have every known is, scientifically speaking, a gray wolf. The Gray Wolf is known to science as Canis Lupus — a species of canid native to North America, Eurasia, and Northern Africa. Although the coyote, the jackal, and the fox all belong to the family Canidae, our domesticated dogs are descended from but one species, and the distinction we have made for them is a subtle shift from the binomial nomenclature — Canis lupus — to the trinomial Canis lupus familiaris.

tabula The Emerald Tablet, Smaragdine, the Tabula Smaragdina, The Emerald Table, is the most ancient and influential text in the alchemical canon. It is supposed to have been written by Hermes Trismegistus himself, and its basic precepts go back at least four thousand years, some would say much further. As it stands today, the text may be no older than the early christian era, but there seems to be an undeniable conceptual link connecting the earliest Egyptian writings with later Classical, Neo-Platonist, Hermetic and Gnostic exegesis; which, in turn flows directly into the literature of alchemy. Beware the Biochar Initiative Turning bioenergy crops into buried charcoal to sequester carbon does not work, and could plunge the earth into an oxygen crisis towards mass extinction by Dr. Mae-Wan Ho A fully referenced and illustrated version of this article is posted on ISIS members’ website.

Alchemists Archives Photo by Linda Dear What do you do when you find a bluish lump of fungus previously unknown to science, growing in your petri dish? If you’re Steven Pollock, you eat it, call your friend, and tell him you’ve discovered the one thing that’s eluded men of obscurity for millennia. I am talking of course about the philosopher’s stone—key to the universe—elixir of life—the ultimate essence of all things.