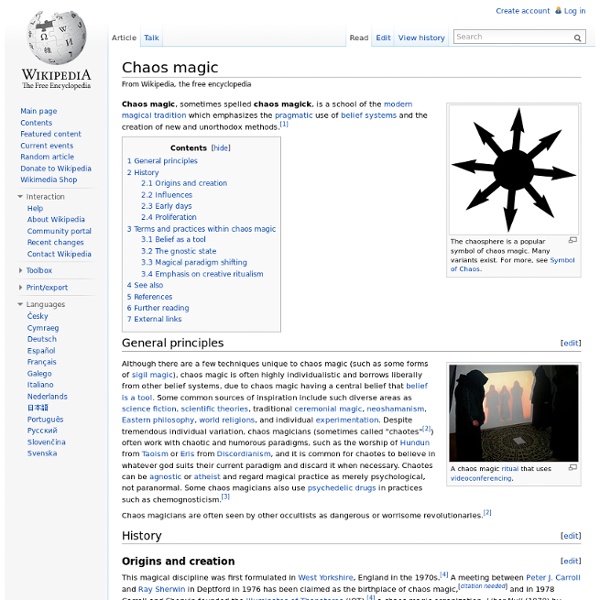 The chaosphere is a popular symbol of chaos magic. Many variants exist. For more, see Symbol of Chaos. General principles[edit] Chaos magicians are often seen by other occultists as dangerous or worrisome revolutionaries.[2] History[edit] Origins and creation[edit] This magical discipline was first formulated in West Yorkshire, England in the 1970s.[4] A meeting between Peter J. Influences[edit] Following Spare's death, magicians continued to experiment outside of traditional magical orders. Early days[edit] The first edition of Liber Null does not include the term "chaos magic", but only refers to magic or "the magic art" in general.[6] Texts from this period consistently claim to state principles universal to magic, as opposed to a new specific style or tradition of magic, and describe their innovations as efforts to rid magic of superstitious and religious ideas. Chaos came to be part of this movement defined as "the 'thing' responsible for the origin and continued action of events[...].

How to Create a Sigil to Manifest Your Deepest Desires A sigil is a symbol used in magical rituals as a means of manifesting a specific outcome by “imprinting” desire into form, in order for that desire to become manifest in the form of your reality. This practice derives from the “Chaos magick” tradition, which places emphasis on a more pragmatic approach to magick by using/creating new or unorthodox methods. Creating a sigil is relatively easy, and the results are incredible if youallow and (most importantly) believe in what you are wishing for. Sigil Daily has a great methodology for creating your own sigil to manifest your desires, and the proper ritual to give it power… How to Create a Sigil via: Sigil Daily

how-to Make a digital synthesizer - Hack a Day.url This week’s How-To comes from our newest contributor: Logan Williams. This simple guide will show you how to build a digital synthesizer that generates and manipulates square waves. Your synthesizer will have one oscillator, which produces a variable pitch controlled by a potentiometer, as well as an LFO which modulates that pitch at a variable frequency.

Numerology Basics Many Pagan spiritual traditions incorporate the practice of numerology. The basic principles of numerology hold that numbers have a great deal of spiritual and magical significance. Some numbers are more potent and powerful than others, and combinations of numbers can be developed for magical use. In addition to magical correspondences, numbers also tie into planetary significance. In Wicca: A Guide for the Solitary Practitioner, author Scott Cunningham says that odd numbers are related to feminine energy, while even numbers are connected to more masculine meanings. Numerology: Do Your Own Reading - Hans Decoz We will be using Pythagorean rather than Chaldean numerology. Do Your Own Numerology Reading: Introduction Your date of birth sets everything in motion, placing you on the path you will walk through the course your life.

Top 10 Ways to Discover New Music Most of my life I have strived to find new and interesting music, but I am often far too busy to really dig deep and find new artists everyday. Now that I am done with college and have a real job, I find that I have even less time to find new music or even stay up to date with all of the new bands. I have, however, found some great resources that keep me in the loop with minimal time and effort. Pandora The Pagan Origins of Christmas - From Paganism to Christianity Christmas is coming and a lot of Neopagans will be celebrating it as “Yule”, on the 21st of December. The Neopagan Yule is loosely based on the Germanic festival of the same name, and I say loosely because we don’t have much information about what the original Pagan festival was, as most of the information we have on Germanic Paganism comes from Christian sources. Nevertheless, religions always build on what is already there and for this reason, you’ll see that a lot of Christmas elements actually have Pagan roots.

Archon Mind Parasite Self-Defense Information concerning mind parasites and how they operate. www.metacenterchicago.com Loving sex with a partner also helps. It is important to cleanse your energetic body of negativity, salt baths, sage smudge, incense, negativity built up in your aura can feed the parasite. On second thought, the Chakras and Kundalini are a natural part of ascension. Reed Ghazala and Circuit Sound Artists in Videos, as NYC’s Bent Festival Gets Underway Circuit bending has a reputation as involving far-out, unstructured experimental noise, of real violence and distortion done to instruments. And there’s probably a place for that. But Reed Ghazala, circuit bending’s spiritual father and electronic practitioner, takes a more organic, evolutionary approach. Reed recently told me about his favorite application of his iPad, apart from exploring new experimental soundscapes with tools like the brilliant granular app Curtis. He brings it with him into the forest, using GPS for location, and tracking plants and animals, identifying the sounds of bird and beasts.