Circle Thrice. Essays by Kevin Simler. The View from Hell. Blog — The Visible College. Videos, articles, and tips to help you succeed, from the world's leading experts. Trogholm. The Brave New World Order. Daily Grail Frontpage. Occult of Personality — Peering Behind the Veil. There is Something Better than Finding a Soulmate. They say that when we’re choosing a tennis partner it is best to find someone that plays better than us so that it will help to improve our game. 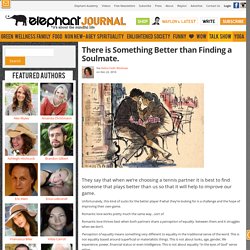 Unfortunately, this kind of sucks for the better player if what they’re looking for is a challenge and the hope of improving their own game. Romantic love works pretty much the same way…sort of. Romantic love thrives best when both partners share a perception of equality between them and it struggles when we don’t. Perception of equality means something very different to equality in the traditional sense of the word. This is not equality based around superficial or materialistic things.

This type of equality is based on how both partners feel with and about each other. Different than “Soulmates”—a term which can have more of an esoteric, intangible, serendipitous quality to it—“Soul Equals” are on similar spiritual paths to each other. The two concepts often do merge, but not always. Intimacy cannot thrive in a union of misaligned souls. Relephant! Strategic Sorcery. Brainsturbator. Facts So Romantic. Ideas Has Science Realized This 350-Year-Old Alchemist Wish List? 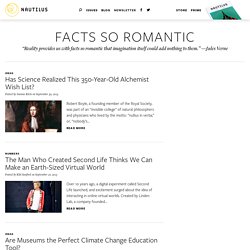 Posted by Joanna Klein on September 30, 2015 Robert Boyle, a founding member of the Royal Society, was part of an “invisible college” of natural philosophers and physicians who lived by the motto: “nullius in verba,” or, “nobody’s… Read More Numbers The Man Who Created Second Life Thinks We Can Make an Earth-Sized Virtual World Posted by Kiki Sanford on September 27, 2015 Over 10 years ago, a digital experiment called Second Life launched, and excitement surged about the idea of interacting in online virtual worlds.

Read More Are Museums the Perfect Climate Change Education Tool? The Secret Sun: Night Force, Part Two: Mind as Weapon (or not) "And I saw a beast coming out of the sea. 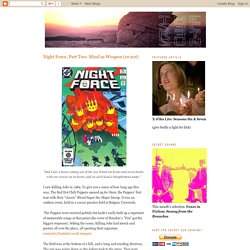 It had ten horns and seven heads, with ten crowns on its horns, and on each head a blasphemous name. " I saw Killing Joke in 1989. To give you a sense of how long ago this was, The Red Hot Chili Peppers opened up for them, the Peppers' first tour with their "classic" Blood Sugar Sex Magic lineup. It was an outdoor event, held in a soccer practice field at Rutgers University. It was phenomenally irresponsible. I don't know what force intervened but the fuse was cut when the band took the stage and the sound was an inaudible hash. Pretty much a typical Killing Joke concert in the early 80s That was at the same venue I remember seeing The Misfits. Night Force of course being a cautionary tale about unleashing the forces that Killing Joke were toying with that night...There's been a lot of theorizing and research done on the intelligence agencies and their involvement in the counterculture(s), a lot of it interesting, a lot of it not.

On the Opening and Closing of Hellmouths. Forecasting the World. The press is cleverly twisting the Hillary e-mail scandal to her benefit by narrowing their focus on what qualifies as “secret” instead of the fact that she conducted all national security business from her private e-mail server to avoid getting subpoenaed. There is no question whatsoever from a legal perspective that what Hillary did was outright criminal and conducting the business of the Secretary of State from a private server from which she then deleted 31,000 emails was at minimum obstruction of justice if not treason to the United States. What Hillary did was far more direct treason than what Edward Snowden was accused of. Even Snowden has come out and stated bluntly that others go to jail for what Hillary did.

How can Hillary claim privacy when she and the Obama Administration have supported the grabbing of every email by the NSA? Why has the press not demanded the NSA turnover all the emails Hillary erased when they have everything? Where is the press with ANY integrity?