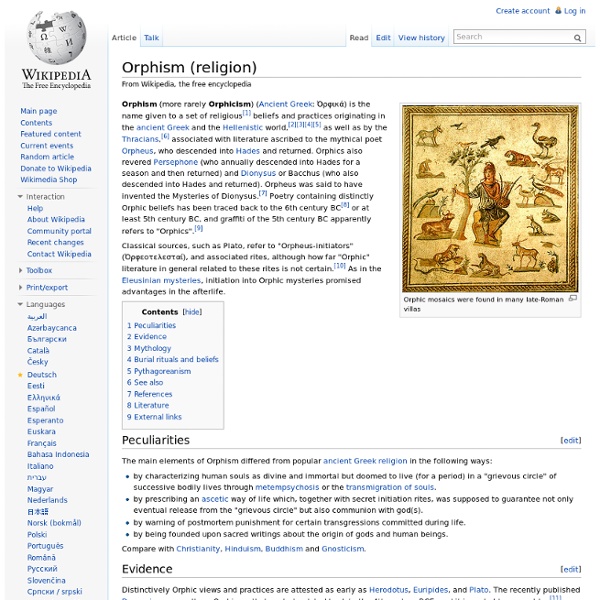 Orphic mosaics were found in many late-Roman villas Orphism (more rarely Orphicism) (Ancient Greek: Ὀρφικά) is the name given to a set of religious beliefs and practices[1] originating in the ancient Greek and the Hellenistic world,[2] as well as by the Thracians,[3] associated with literature ascribed to the mythical poet Orpheus, who descended into Hades and returned. Orphics also revered Persephone (who annually descended into Hades for a season and then returned) and Dionysus or Bacchus (who also descended into Hades and returned). Classical sources, such as Plato, refer to "Orpheus-initiators" (Ὀρφεοτελεσταί), and associated rites, although how far "Orphic" literature in general related to these rites is not certain.[7] As in the Eleusinian mysteries, initiation into Orphic mysteries promised advantages in the afterlife. The main elements of Orphism differed from popular ancient Greek religion in the following ways: Compare with Christianity, Hinduism, Buddhism and Gnosticism.

Platonism - Wikipedia, the free encyclopedia - Aurora Platonism (with a capital "P") is the philosophy of Plato or the name of other philosophical systems considered closely derived from it. With a lower case "p", "platonism" refers to the philosophy that affirms the existence of abstract objects, which are asserted to "exist" in a "third realm distinct both from the sensible external world and from the internal world of consciousness, and is the opposite of nominalism (with a lower case "n").[1] Lower case "platonists" need not accept any of the doctrines of Plato.[1] Philosophy[edit] The primary concept is the Theory of Forms. The only true being is founded upon the forms, the eternal, unchangeable, perfect types, of which particular objects of sense are imperfect copies. [Socrates:]"Since the beautiful is opposite of the ugly, they are two." Platonist ethics is based on the Form of the Good. History[edit] The Academy[edit] Site of Plato's Academy in Athens Around 266 BC, Arcesilaus became head of the Academy. Middle Platonism[edit]

Epicureanism - Wikipedia, the free encyclopedia - Aurora Epicureanism is a system of philosophy based upon the teachings of Epicurus, founded around 307 BC. Epicurus was an atomic materialist, following in the steps of Democritus. His materialism led him to a general attack on superstition and divine intervention. Following Aristippus—about whom very little is known—Epicurus believed that what he called "pleasure" is the greatest good, but the way to attain such pleasure is to live modestly and to gain knowledge of the workings of the world and the limits of one's desires. Epicureanism was originally a challenge to Platonism, though later it became the main opponent of Stoicism. Some writings by Epicurus have survived. History[edit] With the dominance of the Neo-Platonism and Peripatetic School philosophy (and later Christianity) Epicureanism' declined until by the late third century A.D. there was very little trace of its existence.[4] By the 16th century, the works of Diogenes Laertius were being printed in Europe. Religion[edit] Ethics[edit]

Asceticism - Wikipedia, the free encyclopedia - Aurora Asceticism (/əˈsɛtɪsɪz(ə)m/; from the Greek: ἄσκησις áskēsis, "exercise" or "training") is a lifestyle characterized by abstinence from various worldly pleasures, often with the aim of pursuing spiritual goals. Many religious traditions, such as Hinduism, Buddhism, Jainism, and some Christian groups (for example, the Desert Fathers) include practices that involve restraint with respect to actions of body, speech, and mind. The founders and earliest practitioners of these religions lived extremely austere lifestyles, refraining from sensual pleasures and the accumulation of material wealth. They practised asceticism not as a rejection of the enjoyment of life, or because the practices themselves are virtuous, but as an aid in the pursuit of physical and metaphysical health. They eschewed worldy pleasures and led an abstemious lifestyle. Etymology[edit] The adjective "ascetic" derives from the ancient Greek term askēsis, which means training or exercise. Religious motivation[edit]

Stoicism - Wikipedia, the free encyclopedia - Aurora School of Hellenistic Greek philosophy Stoicism is a school of Hellenistic philosophy which was founded by Zeno of Citium, in Athens, in the early 3rd century BC. Stoicism is a philosophy of personal ethics informed by its system of logic and its views on the natural world. Stoicism flourished throughout the Roman and Greek world until the 3rd century AD, and among its adherents was Emperor Marcus Aurelius. Name[edit] Stoicism was originally known as ‘Zenonism’, after the founder Zeno of Citium. Sometimes Stoicism is therefore referred to as just ‘The Stoa’, or the philosophy of ‘The Porch’.[5] Basic tenets[edit] Stoicism teaches the development of self-control and fortitude as a means of overcoming destructive emotions; the philosophy holds that becoming a clear and unbiased thinker allows one to understand the universal reason (logos). History[edit] Scholars usually divide the history of Stoicism into three phases: No complete works survive from the first two phases of Stoicism.