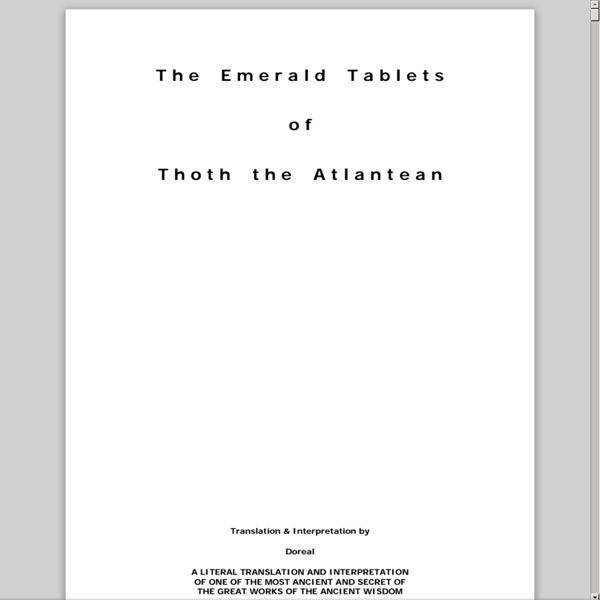 alchemical archives Kybalion The Kybalion: Hermetic Philosophy, originally published in 1908 by a person or persons under the pseudonym of "the Three Initiates", is a book claiming to be the essence of the teachings of Hermes Trismegistus. General description[edit] The French cover of the book The Kybalion was first published in 1908 by the Yogi Publication Society, in Chicago, Illinois, and is now in the public domain, as well as circulating the World Wide Web. Authorship[edit] The "Three Initiates" who authored The Kybalion chose to remain anonymous. Atkinson was known to use many pseudonyms, and to self-publish his works. A common theory is that Atkinson co-wrote the book with Paul Foster Case and Michael Whitty. Along these lines, much has been made about Paul Foster Case's being a Freemason, and that The Kybalion's publisher, the Yogi Publication Society, gave its address as "Masonic Temple, Chicago IL" on the book's frontispiece. The seven Principles[edit] Principle of Mentalism[edit] Principle of Vibration[edit]

Gnostic Teachings Hermetica Scope[edit] The term particularly applies to the Corpus Hermeticum, Marsilio Ficino's Latin translation in fourteen tracts, of which eight early printed editions appeared before 1500 and a further twenty-two by 1641.[2] This collection, which includes the Pœmandres and some addresses of Hermes to disciples Tat, Ammon and Asclepius, was said to have originated in the school of Ammonius Saccas and to have passed through the keeping of Michael Psellus: it is preserved in fourteenth century manuscripts.[3] The last three tracts in modern editions were translated independently from another manuscript by Ficino's contemporary Lodovico Lazzarelli (1447–1500) and first printed in 1507. Extensive quotes of similar material are found in classical authors such as Joannes Stobaeus. Character and antiquity[edit] The extant Egyptian-Greek texts dwell upon the oneness and goodness of God, urge purification of the soul, and defend pagan religious practices, such as the veneration of images. I. (II.) V.

Emerald Tablet of Hermes Sacred-Texts Esoteric Index Previous Next The Emerald Tablet of Hermes History of the Tablet History of the Tablet (largely summarised from Needham 1980, & Holmyard 1957) The Tablet probably first appeared in the West in editions of the psuedo-Aristotlean Secretum Secretorum which was actually a translation of the Kitab Sirr al-Asar, a book of advice to kings which was translated into latin by Johannes Hispalensis c. 1140 and by Philip of Tripoli c.1243. Translations From Jabir ibn Hayyan. 0) Balinas mentions the engraving on the table in the hand of Hermes, which says: 1) Truth! Another Arabic Version (from the German of Ruska, translated by ‘Anonymous'). 0) Here is that which the priest Sagijus of Nabulus has dictated concerning the entrance of Balinas into the hidden chamber... Twelfth Century Latin Translation from Aurelium Occultae Philosophorum..Georgio Beato 1) This is true and remote from all cover of falsehood 2) Whatever is below is similar to that which is above. From Idres Shah

rpus Hermeticum Background for Ars Magica sagas The Corpus Hermeticum is a collection of texts from the second and third centuries of our era that survived from a more extensive literature. Reflecting the generalized spiritual orientation of late Hellenistic gnosis rather than a tradition in any organized sense, these sometimes contradictory texts share only their claim to a common source of revelation, Hermes Trismegistus. In most of the texts his revelations are presented as a dialogue with one of three pupils: Tat, Asclepius, or Ammon. According to Augustine[115], Asclepius was the grandson of the great Greek god of the same name, and Tat was likewise the grandson of his divine namesake (the Roman deity Mercurius, the same as the Greek god Hermes). The Hermetic texts are often cited as examples of the extent of late Hellenistic syncretism, for they exhibit traits of magic, astrology, alchemy, Platonism and Stoicism, and the Mysteries, as well as Judaism and gnostic thought. Hermetic Collections

Angels Introduction To The Kybalion We take great pleasure in presenting to the attention of students and investigators of the Secret Doctrines this little work based upon the world-old Hermetic Teachings. There has been so little written upon this subject, not withstanding the countless references to the Teachings in the many works upon occultism, that the many earnest searchers after the Arcane Truths will doubtless welcome the appearance of this present volume. The purpose of this work is not the enunciation of any special philosophy or doctrine, but rather is to give to the students a statement of the Truth that will serve to reconcile the many bits of occult knowledge that they may have acquired, but which are apparently opposed to each other and which often serve to discourage and disgust the beginner in the study. From the land of the Ganges many advanced occultists wandered to the land of Egypt, and sat at the feet of the Master. "O, let not the flame die out! Key Extracts "O, let not the flame die out!