Gary Oldman in 'Darkest Hour' vs. the Real Winston Churchill. The perils of teaching history through popular culture. Fake films? Oscar contenders criticised over retelling of historical events. Director blends history, film to tell story of slave escape. "I also wanted to give them a voice," he said. 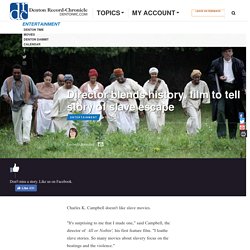 Racial Conflict In Cinema: A Primer. Detroit comes out this week.

Get your tickets here. Will Kathryn Bigelow's new film Detroit join the ranks of films like The Color Purple and Roots? Or will it be seen on the same level as movies like Crash (2004)? Only time will tell as the film is set to release this Friday, August 4, 2017. There was a strict divide among critics on whether or not this movie is meaningful or historically accurate, but one thing is clear: this film is scarily timely. Whether or not Detroit is your cup of tea, there are some other great films out there that deal with race, politics, and the law that should definitely be viewed in your lifetime. I am Not Your Negro Directed by Raoul Peck, this radical, up-to-the-minute examination of race in America, using Baldwin’s original words, is as profound as it is timely. Why you should see this film: It paints a picture that things haven't changed; it's just history repeating itself. 'Dunkirk': How historically accurate is Christopher Nolan's WWII film? What Really Happened at Dunkirk? What the Movie Missed.

This article first appeared on the Hoover Institution site. 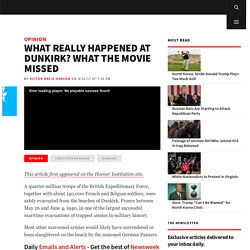 A quarter-million troops of the British Expeditionary Force, together with about 140,000 French and Belgian soldiers, were safely evacuated from the beaches of Dunkirk, France between May 26 and June 4, 1940, in one of the largest successful maritime evacuations of trapped armies in military history. Are movies a good way to learn history? Hollywood loves history. 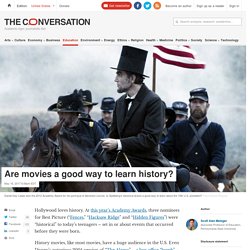 At this year’s Academy Awards, three nominees for Best Picture (“Fences,” “Hacksaw Ridge” and “Hidden Figures”) were “historical” to today’s teenagers – set in or about events that occurred before they were born. History movies, like most movies, have a huge audience in the U.S. Even Disney’s notorious 2004 version of “The Alamo” – a box office “bomb” – was seen by millions. That’s far more people than read most best-selling historians’ books. A lot of these viewers are kids, watching the movies in theaters, at home and even at school. But are motion pictures like these good for learning about history? Henrietta Lacks film highlights important issues, Johns Hopkins history. By Hub staff report /Published Apr 18 Johns Hopkins leaders sent a message to the JHU and Hopkins Medicine communities today about an upcoming HBO film, The Immortal Life of Henrietta Lacks. 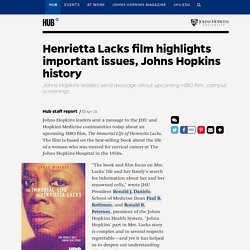 'Hidden Figures' Is Coming to Classrooms. The real-life story behind the hit movie Hidden Figures doesn't end once the credits roll; for educators, there's now a free curriculum to use in the classroom that shines a light on the pioneering African-American women of NASA's space program. 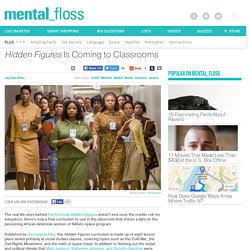 Published by Journeys in Film, this Hidden Figures curriculum is made up of eight lesson plans aimed primarily at social studies classes, covering topics such as the Cold War, the Civil Rights Movement, and the math of space travel. In addition to fleshing out the social and political climate that Mary Jackson, Katherine Johnson, and Dorothy Vaughan were living in, some courses also focus on the movie itself, with attention paid to the filmmaking techniques used and an analysis of the shooting script. The curriculum also provides activities revolving around the role of women in STEM, including a breakdown of notable figures, group projects, and information on how students can channel their academic passions into a career. Hidden Figures: A Film with History, Science and Female Empowerment – The McKendree Review. By Paxton Cohoon, Contributing Writer The film Hidden Figures was released on December 25, 2016 and has grossed $2.9 million from only 25 different locations since then. 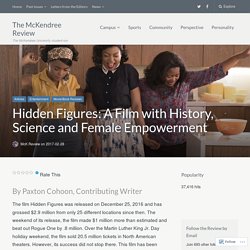 The weekend of its release, the film made $1 million more than estimated and beat out Rogue One by .8 million. Over the Martin Luther King Jr. Day holiday weekend, the film sold 20.5 million tickets in North American theaters. Recreating history for the movies. What Is Apocalypse Now Really About? An Hour-Long Video Analysis of Francis Ford Coppola's Vietnam Masterpiece. The distorted sounds of helicopter blades. 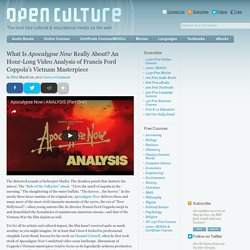 The drunken punch that shatters the mirror. The “Ride of the Valkyries” attack. “I love the smell of napalm in the morning.” The slaughtering of the water buffalo. “The horror… the horror.” Stories of the Past and Future (alt-text) - Watch the Greatest Silent Films Ever Made in Our Collection of 101 Free Silent Films Online. Free Online: Meet John Doe, Frank Capra's Inspiring 1941 Classic - 50 Film Noirs You Can Watch For Free: A Dame with a Past. A Desperate, Doomed Man. A Gun. Film noir isn’t really a genre. 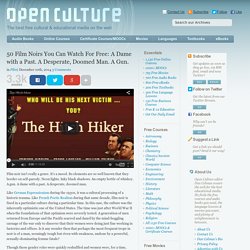 It’s a mood. Its elements are so well known that they border on self-parody. Neon lights. Inky black shadows. The Boston Public Library Will Digitize & Put Online 200,000+ Vintage Records. The Internet Archive “Liberates" Books Published Between 1923 and 1941, and Will Put 10,000 Digitized Books Online. Here at Open Culture, we can never resist the chance to feature books free to read and download online. 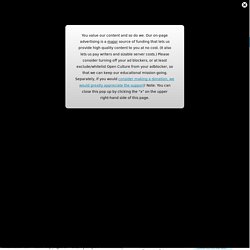 Books can become free in a number of different ways, one of the most reliable being reversion to the public domain after a certain amount of time has passed since its publication — usually a long time, with the result that the average age of the books freely available online skews quite old. Nothing wrong with old or even ancient reading material, of course, but sometimes one wishes copyright law didn't put quite such a delay on the process. 700 Free Movies Online: Great Classics, Indies, Noir, Westerns. Advertisment Watch 1,150 movies free online. Includes classics, indies, film noir, documentaries and other films, created by some of our greatest actors, actresses and directors.

Today in History: King Kong barges into New York and Film Canon (1933) When History Is Not Good Enough for Hollywood: Selma, Lyndon B. Johnson, and Martin Luther King Jr. - American Historical Association. This is the first in a series of posts on AHA Today that will discuss the film Selma. Author Kent Germany is associate professor of history at the University of South Carolina and non-resident research fellow with the Presidential Recordings Program at the University of Virginia’s Miller Center.

He is the author of New Orleans After the Promises and editor of four volumes on the Lyndon Johnson recordings, including a digital edition on LBJ and civil rights. “Get it right; and don’t be boring.” That is the advice I give to students about writing history. “That’s just not true”: What “Selma” and the establishment get wrong about LBJ. Because of last year being the 50th anniversary of the passage of the Civil Rights Act — the equally important (and currently imperiled) Voting Rights Act will hit the half-century mark later this year — and because of the runaway success of the film “Selma,” Lyndon Baines Johnson has been a real topic of conversation in American politics so far this year.

At first blush, this probably seems odd; Johnson’s been dead for more than four decades. But as Princeton historian Julian Zelizer demonstrates in “The Fierce Urgency of Now: Lyndon Johnson, Congress and Battle for the Great Society,” his new look at the 36th president’s most fruitful years, one of the reasons Johnson still looms so large in the American consciousness is because the politics of his time and the politics of today are much more alike than you may think.

What made you want to write this book? What were the elements of this period in American history you most felt deserved further scrutiny? Teaching History With Film: 'Lincoln', 'Argo' and 'Zero Dark Thirty' Photo Three of this year’s Oscar contenders — “Lincoln,” “Argo” and “Zero Dark Thirty” — invite viewers to look at history, either through the lens of the distant past (as in the case of “Lincoln”) or through recent events (like “Zero Dark Thirty”), and to question the degree of truth and fiction at work in the retelling of these events.

These same three movies have also prompted some serious debate and reflection on American politics, and the direction the nation should be headed. Below, we offer ways you can approach each film in the classroom, with critical thinking questions and related Times resources. While they are intended as jumping-off points for further discussion and reflection, you can also have students address these themes by writing their own movie reviews or scene analyses. Overview | “Lincoln” is a historical drama and biopic, written by Tony Kushner, directed by Steven Spielberg and starring Daniel Day-Lewis, that covers the final four months of Abraham Lincoln’s life. Oscar Films & the Prison of Historical Accuracy. How true should historical fiction be? When It Matters that Hollywood Get History Right. Jaws, 40 years on: ‘One of the truly great and lasting classics of American cinema’

Oscars: Real History Is Far More Intriguing than Reel History. How 12 Years a Slave Gets History Right: By Getting It Wrong. Historical Vocab: When We Get It Wrong, Does It Matter? Titanic Movie vs. Titanic History - Pictures, Survivors, Facts. Tarantino Unchained - The New Yorker. 14 Things You Might Not Know About 'The Sound of Music' 15 Things You May Not Know About 'Enemy at the Gates' 8 Historical Inaccuracies From the Film Gladiator. Watch Earth, a Landmark of Soviet Cinema (1930) Confederate Monuments in Georgia - Google Fusion Tables.