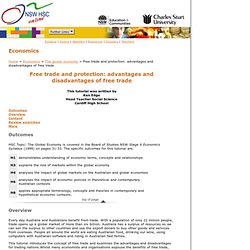 The specific outcomes for this tutorial are: Overview Every day Australia and Australians benefit from trade. This tutorial introduces the concept of free trade and examines the advantages and disadvantages for trading nations.Whilst many economists and organisations espouse the benefits of free trade, some groups oppose free trade and see it as disadvantageous to many people, particularly in developing countries, where local producers and employees are vulnerable to exploitation.

Content Fact file. The Australian economy must adapt or die. By Leith van Onselen Business Spectator’s Rob Burgess has written a great post today encapsulating the challenges facing the labour market and explaining why the auto industry should not be left to die as the once-in-a-century mining investment boom unwinds: When veteran journalist Kerry O’Brien asked former prime minister Paul Keating what happened to all the workers who lost their jobs as import tariffs were slashed in the early 1990s, Keating claimed they “found a better job a week later”.While that’s factually wrong, the spirit of the statement is right – by removing Australia’s decades-old scaffolding of protectionism, the scene was set for new jobs to emerge in more profitable areas.It was only a few years after Keating lost power that education exports began to boom and mining boom mark I began to take off. 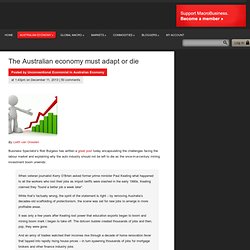 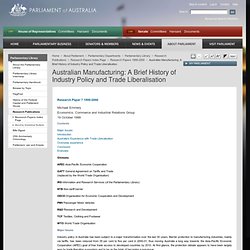 Why we must keep Australian car-making alive. Australia can't have a car industry, or any significant manufacturing industry, unless we have an industry policy. 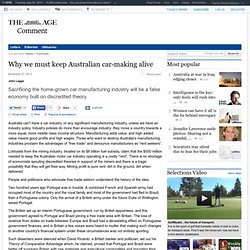 Industry policies do more than encourage industry: they move a country towards a more equal, more middle class income structure. Manufacturing adds value, and high added value means good profits and high wages. Those who want to destroy Australia's manufacturing industries proclaim the advantages of “free trade” and denounce manufacturers as “rent seekers”. Lobbyists from the mining industry, bloated on its $8 billion fuel subsidy, claim that the $500 million needed to keep the Australian motor car industry operating is a costly “rent”. There is no shortage of economists spouting discredited theories in support of the miners and there is a tragic possibility that they will get their way. People and politicians who advocate free trade seldom understand the history of the idea.

Two hundred years ago Portugal was in trouble. Advertisement It doesn't have to be that way. A downgrade for Qantas, a lesson for Australia's economy. 'Another Qantas irony is that it played a huge part in globalising Australia.' Moody's Investors Service last week did Australia's 23 million people a great service by junking their national airline, Qantas Airways. 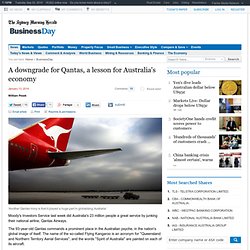 The 93-year-old Qantas commands a prominent place in the Australian psyche, in the nation's global image of itself. The name of the so-called Flying Kangaroo is an acronym for ''Queensland and Northern Territory Aerial Services'', and the words ''Spirit of Australia'' are painted on each of its aircraft. So to be downgraded by Moody's to junk status - following Standard & Poor's move last month, and amid a record first-half loss and 1000 job cuts - is quite a blow.

It does not help that Qantas is only the latest Aussie brand to fall. Advertisement Odd as it sounds, these corporate shocks come at a serendipitous moment. In many ways, the same could be said of Australia's entire economy, particularly as China begins to slow down. Bloomberg. Www.oecd.org/australia/39218531.pdf.