Benedict Cumberbatch Reads Keats - Ode to a Nightingale. BBC Radio 4 - Schama on Blake. Romantic Textualities: Literature and Print Culture, 1780–1840. As part of this ongoing series on Teaching Romanticism we will consider the ways in which we lecture on and discuss individual authors, whether during author-specific modules or broader period surveys. 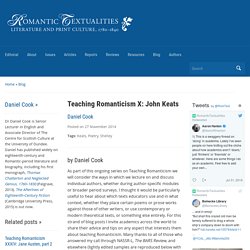 I thought it would be particularly useful to hear about which texts educators use and in what context, whether they place certain poems or prose works against those of other writers, or use contemporary or modern theoretical texts, or something else entirely. For this strand of blog posts I invite academics across the world to share their advice and tips on any aspect that interests them about teaching Romanticism. Many thanks to all of those who answered my call through NASSR-L, The BARS Review, and elsewhere (lightly edited samples are reproduced below with permission of the authors). Please do feel free to contact me with advice on future subjects or, indeed, with further thoughts on teaching Smith, about which much more could be said, evidently. G. In motion). 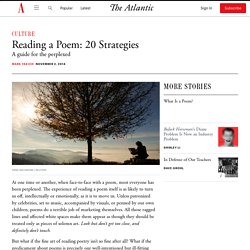 Try to meet a poem on its terms not yours. If you have to “relate” to a poem in order to understand it, you aren’t reading it sufficiently. In other words, don’t try to fit the poem into your life. Try to see what world the poem creates. TED-Ed - Posts. Literature Glossary - Meter. Ode to a Nightingale - John Keats Poetry - Keats' Kingdom. Notes on Ode to a Nightingale by John Keats One of the major themes of the Romantic era was the conflict between the claims of the Imagination and the claims of real life. 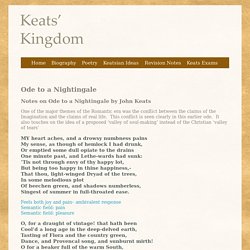 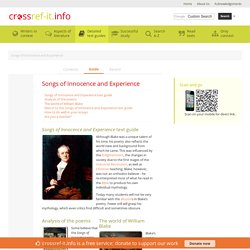 This was influenced by the Enlightenment, the changes in society due to the first stages of the Industrial Revolution, as well as Christian teaching. Blake, however, was not an orthodox believer - he re-interpreted most of what he read in the Bible to produce his own individual mythology. Today many students will not be very familiar with the allusions in Blake’s poetry. The Blossom - Imagery, symbolism and themes » Songs of Innocence and Experience Study Guide from Crossref-it.info. English Standard VersionKing James Version 1And he called to him his twelve disciples and gave them authority over unclean spirits, to cast them out, and to heal every disease and every affliction. 2The names of the twelve apostles are these: first, Simon, who is called Peter, and Andrew his brother; James the son of Zebedee, and John his brother; 3Philip and Bartholomew; Thomas and Matthew the tax collector; James the son of Alphaeus, and Thaddaeus; 4Simon the Zealot, and Judas Iscariot, who betrayed him. 5These twelve Jesus sent out, instructing them, Go nowhere among the Gentiles and enter no town of the Samaritans, 6but go rather to the lost sheep of the house of Israel. 7And proclaim as you go, saying, The kingdom of heaven is at hand. 8Heal the sick, raise the dead, cleanse lepers, cast out demons. 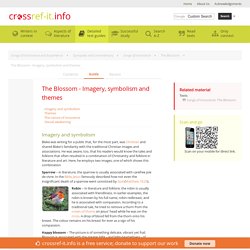 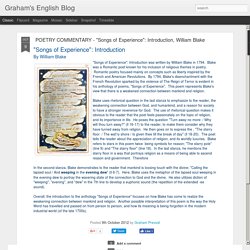 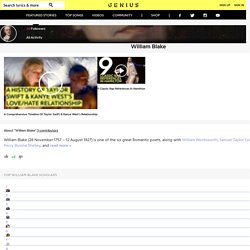 He is one of the few figures in history to be studied for his accomplishments in multiple fields, as he was also a printmaker and painter that holds a place in the canon for studiers of art. Blake’s most famous work is The Songs of Innocence and Experience – a volume he originally released in two parts (Innocence and Experience) but later combined. He made prints and created the volumes by hand so, while the actual copies he made weren’t widely sold, they are highly valuable.

Every poem in the volume is accompanied by an image and some poems actually have different colorations that arguably change the meanings. Despite his wild political views, he actually lived a calm life. John Keats. Introduction to Keats. An Overview John Keats lived only twenty-five years and four months (1795-1821), yet his poetic achievement is extraordinary. 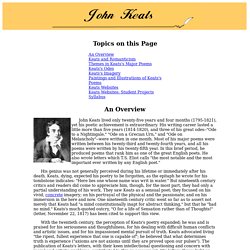 His writing career lasted a little more than five years (1814-1820), and three of his great odes--"Ode to a Nightingale," "Ode on a Grecian Urn," and "Ode on Melancholy"--were written in one month. Most of his major poems were written between his twenty-third and twenty-fourth years, and all his poems were written by his twenty-fifth year. In this brief period, he produced poems that rank him as one of the great English poets. He also wrote letters which T.S. Reading a Poem: 20 Strategies - The Atlantic. Poetry Foundation. Poetry archive. Poetry.org - Resource site for poetry and poets.