Literary Analysis Papers: How to read a poem 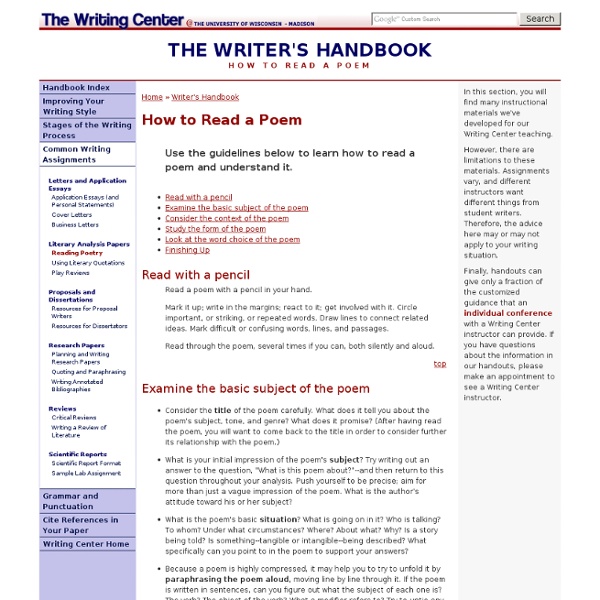 Use the guidelines below to learn how to read a poem and understand it. Read with a pencil Read a poem with a pencil in your hand. Mark it up; write in the margins; react to it; get involved with it. Read through the poem, several times if you can, both silently and aloud. top Examine the basic subject of the poem Consider the title of the poem carefully. Consider the context of the poem Are there any allusions to other literary or historical figures or events? Study the form of the poem Consider the sound and rhythm of the poem. Look at the word choice of the poem One way to see the action in a poem is to list all its verbs. Finishing Up Ask, finally, about the poem, "So what?" For further information you may wish to take the Writing Center class entitled Literary Analysis? Related:  Poetry

How to Read a Poem Reproduced in partnership with the Great Books Foundation. Reading poetry well is part attitude and part technique. Curiosity is a useful attitude, especially when it’s free of preconceived ideas about what poetry is or should be. In Great Books programs, the goal of careful reading is often to take up a question of meaning, an interpretive question that has more than one answer. Getting Started: Prior Assumptions Most readers make three false assumptions when addressing an unfamiliar poem. William Carlos Williams wrote a verse addressed to his wife in the poem "January Morning,": All this— was for you, old woman. Williams admits in these lines that poetry is often difficult. This act of completion begins when you enter the imaginative play of a poem, bringing to it your experience and point of view. Literature is, and has always been, the sharing of experience, the pooling of human understanding about living, loving, and dying. Poems speak to us in many ways. Reading a Poem Aloud The Line

lesson ideas GCSE poetry, my last duchess - poem by robert browning Robert Browning was a 19th-century British poet whose reputation and popularity has grown since his work was first published in the Victorian era. Many of his most well-known poems, such as 'My Last Duchess', are in the form of a dramatic monologue. Here we have an arresting psychological portrait based on the historical figure of Alphonso II of Ferrara. Browning quickly engages the reader's sympathy -- but with whom? Read the poem and then test your analytical skills by answering the questions. My Last Duchess That’s my last Duchess painted on the wall, Looking as if she were alive. Robert Browning Fun With Words: Glossary of Linguistics and Rhetoric ablaut a vowel change that accompanies a change in grammatical function. Same as "gradation." Sing, sang, and sung. accidence the part of morphology that deals with the inflections of words. accismus pretended refusal of something desired. acrolect a variety of language that is closest to a standard main language, especially in an area where a creole is also spoken. adianoeta an expression that carries both an obvious meaning and a second, subtler meaning. adnominal characteristic of an adnoun. adnominatio assigning to a proper name its literal or homophonic meaning; also, paronomasia or polyptoton. adnoun the use of an adjective as a noun. adynaton a declaration of impossibility, usually expressed as an exaggerated comparison with a more obvious impossibility. alexia inability to read, usually caused by brain lesions; word blindness. alliteration repetition of the same sound beginning several words placed close together, usually adjacent. alphabetism the expression of spoken sounds by an alphabet.

Imagery, symbolism and themes in Blake's The Sick Rose from Crossref-it.info King James VersionToday's New International Version 1The vision of Isaiah the son of Amoz, which he saw concerning Judah and Jerusalem in the days of Uzziah, Jotham, Ahaz, and Hezekiah, kings of Judah. 2Hear, O heavens, and give ear, O earth: for the LORD hath spoken, I have nourished and brought up children, and they have rebelled against me. 3The ox knoweth his owner, and the ass his master's crib: but Israel doth not know, my people doth not consider. 4Ah sinful nation, a people laden with iniquity, a seed of evildoers, children that are corrupters: they have forsaken the LORD, they have provoked the Holy One of Israel unto anger, they are gone away backward. 5Why should ye be stricken any more? 1The vision concerning Judah and Jerusalem that Isaiah son of Amoz saw during the reigns of Uzziah, Jotham, Ahaz and Hezekiah, kings of Judah. 2Hear me, you heavens! Listen, earth!

Why Teaching Poetry Is So Important - Andrew Simmons 16 years after enjoying a high school literary education rich in poetry, I am a literature teacher who barely teaches it. So far this year, my 12th grade literature students have read nearly 200,000 words for my class. Poems have accounted for no more than 100. This is a shame—not just because poetry is important to teach, but also because poetry is important for the teaching of writing and reading. High school poetry suffers from an image problem. I have always rejected these clichéd mischaracterizations born of ignorance, bad movies, and uninspired teaching. In an education landscape that dramatically deemphasizes creative expression in favor of expository writing and prioritizes the analysis of non-literary texts, high school literature teachers have to negotiate between their preferences and the way the wind is blowing. Yet poetry enables teachers to teach their students how to write, read, and understand any text. The point of reading a poem is not to try to “solve” it.

Prepare an AFTER-Duction for the Emcee! - NoSweatPublicSpeaking.com :: NO SWEAT Public Speaking! I’ll bet you’ve experienced this: The master of ceremonies takes the microphone immediately after a speaker finishes their talk and says, in an underwhelming manner,“Thanks for coming. Drive home safely.” WOW! That’s memorable isn’t it? Ending a program like that is unfortunate. If you’ve read any of my books, posts, or seen me speak, you know I’m a big proponent of writing your own Introduction. The same principal holds true for the words the emcee should speak after the speaker closes their presentation. Here, again, the Speaker should write the After-Duction for the host to deliver as if they wrote it. The After-Duction serves several purposes: It thanks the speaker for attending the meeting and their presentation.Reinforces something of value from their message.Helps, where appropriate, the speaker sell additional products and services. The verbiage, where relevant and appropriate, could be: Thank you, (Speaker), for a great presentation and message! That is my mantra. Services: Topics:

"Porphyria's Lover" — Vastly Misunderstood Poetry [In September 2011 a reader wrote into provide evidence that contradicts this interpretation.] obert Browning's "Porphyria's Lover" was initially entitled "Porphyria" when in 1836 it first appeared within the Monthly Repository. It had great appeal to its later Victorian audience who was shocked by the description of Porphyria's death. However, from its onset, the interpretation of the poem began to suffer from obfuscation and misinterpretation as the reason for Porphyria's death became more and more controversial. As is often the case, discourse can surround a work that is misunderstood. I respectfully submit that, early on, a link in the chain of reasoning was somehow missed and the path leading to a proper conclusion regarding that strangulation went undiscovered. How can I be so certain that my take on this great literary work is correct to the extent that nearly two centuries of readers, both expert and layman alike, are wrong as having missed the mark. It has its "utmost will"!

Writing by Ear Shanan Haislip is a full-time business writer, essayist and webmaster. She makes some interesting points about the overlap between music and writing in this article. In the fourth grade, every kid, including me, wanted to play the saxophone. The day musical instruments were handed out, in the orchestra room at East Dover Elementary, all six saxophones were claimed in the stampede, along with the drum sets, the trumpets, and the triangle. When the dust cleared, two instruments were left: an ugly brown thing that resembled an oversized violin, or a dented silver tuba with a bell bigger than my head. I pointed. “I want that.” That turned out to be a viola, covered in flecks of kid-grime, the unprepossessing color of a Tootsie roll. In the months that followed, I found the viola’s ability to make noise, any kind of noise, intoxicating. When I write, there are times when I drift back to those early viola days, back to the sheer delight and transporting power of sound.

The Interactive Raven pondered: mulled over, contemplated quaint: odd, singular, old-fashioned lore: traditional knowledge dreary: dull, tiresome Alliteration:Repeated consonant sounds Internal Rhyme:Rhyme within the line. Visual Writing Prompts | Page 8 Prompt by John T. Spencer – Original Article at The Atlantic Cities Prompt by John T. Spencer The Raven Cummings Guides Home..|..Contact This Site..|..Poe Films: DVD, VHS..|..Other Poe Study Guides Background Notes Compiled by Michael J. Cummings..© 2004 . Setting The chamber of a house at midnight. Source of Inspiration The raven in Charles Dickens' 1841 novel, Barnaby Rudge, a historical novel about anti-Catholic riots in London in 1780 in which a mentally retarded person (Barnaby) is falsely accused of participating. .......ONCE u PON a MID night DREAR y, WHILE i POND ered WEAK and WEAR y In this line, the capitalized letters represent the stressed syllables and the lower-cased letters, the unstressed ones. Criticism Some reviewers in Poe’s day, including poet Walt Whitman, criticized “The Raven” for its sing-song, highly emotional quality. The Raven By Edgar Allan Poe Published on January 29, 1847 Complete Text With Annotation and Endnotes by Michael J. Once upon a midnight dreary, while I pondered, weak and weary,............ "Prophet!" "Prophet!"