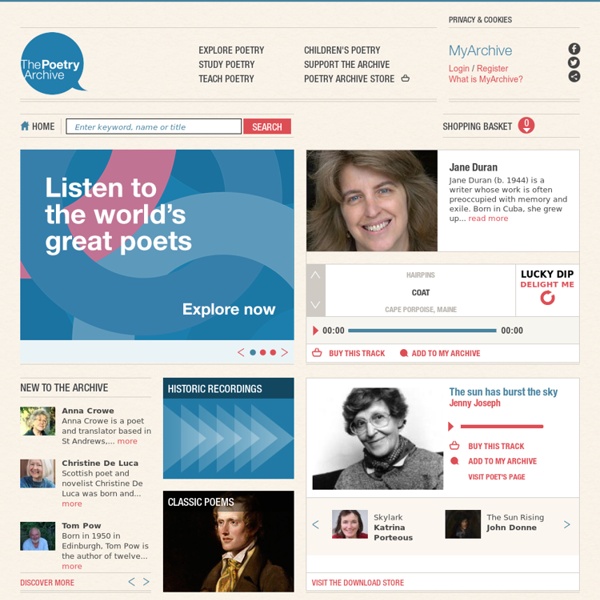 Introduction to Keats An Overview John Keats lived only twenty-five years and four months (1795-1821), yet his poetic achievement is extraordinary. His writing career lasted a little more than five years (1814-1820), and three of his great odes--"Ode to a Nightingale," "Ode on a Grecian Urn," and "Ode on Melancholy"--were written in one month. Most of his major poems were written between his twenty-third and twenty-fourth years, and all his poems were written by his twenty-fifth year. In this brief period, he produced poems that rank him as one of the great English poets.

COMPLETE COLLECTION OF POEMS BY RUDYARD KIPLING Kipling gained renown throughout the world as a poet and storyteller. He was also known as a leading supporter of the British Empire. As apparent from his stories and poems, Kipling interested himself in the romance and adventure which he found in Great Britain's colonial expansion. Kipling was born on Dec.30, 1865, in Bombay, where his father directed an art school. He learned Hindi from his nurse, and he also learned stories of jungle animals. William Blake William Blake (28 November 1757 – 12 August 1827) is one of the six great Romantic poets, along with William Wordsworth, Samuel Taylor Coleridge, Lord Byron, Percy Bysshe Shelley, and John Keats. He is one of the few figures in history to be studied for his accomplishments in multiple fields, as he was also a printmaker and painter that holds a place in the canon for studiers of art. Blake’s most famous work is The Songs of Innocence and Experience – a volume he originally released in two parts (Innocence and Experience) but later combined. He made prints and created the volumes by hand so, while the actual copies he made weren’t widely sold, they are highly valuable. Every poem in the volume is accompanied by an image and some poems actually have different colorations that arguably change the meanings. Despite his wild political views, he actually lived a calm life.

20 Words We Owe to William Shakespeare No high school English curriculum is complete without a mandatory dose of William Shakespeare, and no American teenager makes it to graduation without whining about how boring it is to learn about iambic pentameter. As contemporary speakers of the English language, however, they might be interested to learn how much the Bard of Avon had in common with the generations that popularized the acronyms LOL and OMG and reinvented the 1940s slang term “hipster.” Endlessly imaginative and not overly concerned with grammatical convention, Shakespeare’s scripts contain over 2200 never-before-seen words—a diverse collection of loan-words from foreign languages, compound words from existing English terms, nouns turned into verbs, and creatively applied prefixes—many of which have entered into everyday language. Here are 20 examples of words we can thank Shakespeare for.

A letter to Charles Dickens on his 200th birthday My dear Mr Dickens, Happy 200th birthday! You yourself were not much given to celebrating anniversaries, but you did go to Stratford-upon-Avon in April 1864, with Robert Browning, Wilkie Collins and John Forster, to celebrate Shakespeare's 300th, "in peace and quiet". Graham's English Blog: POETRY COMMENTARY - "Songs of Experience": Introduction, William Blake 4. The title of the novel refers to Pecola Breedlove's intense desire for blue eyes. She believes herself ugly and unworthy of love and respect, but is convinced that her life would be magically transformed if she possessed blue eyes. How does racial selfloathing corrode the lives of Pecola and her parents, Cholly and Pauline Breedlove? How does racial self-hatred manifest itself in characters like Maureen Peal, Geraldine, and Soaphead Church?

The Poetics of Aristotle, by Aristotle By Aristotle (350 B.C.E) A Translation By S. H.