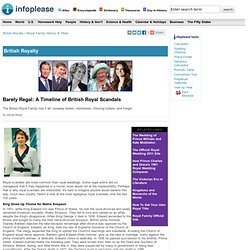 Royal scandals are more common than royal weddings. Some regal antics are so outrageous that if they happened in a movie, eyes would roll at the implausibility. Perhaps that is why royal scandals are irresistible. It's hard to imagine anyone would behave this way, much less royalty. Here's a look at the most egregious royal scandals over the last 100 years. King Gives Up Throne for Wallis Simpson In 1931, while King Edward VIII was Prince of Wales, he met the once-divorced and newly remarried American socialite, Wallis Simpson. Royal Case of Cold Feet Princess Margaret, the youngest sister of Queen Elizabeth, called off her marriage to Peter Townsend in 1955, after being engaged for two years.

In 1985, Mark Phillips, Princess Anne's husband, fathered a daughter, Felicity, with his mistress, Heather Tonkin. Fergie Steps on Some Toes Diana's Confession The Butler Did It Princes Behaving Badly. The Royal Family Events in 1990s. Death of Diana, Princess of Wales. Circumstances[edit] The crash[edit] On Saturday 30 August 1997, Diana, Princess of Wales, left Sardinia on a private jet and arrived in Paris, France, with Dodi Fayed, the son of Mohamed al-Fayed.[11] They had stopped there en route to London, having spent the preceding nine days together on board Mohamed al-Fayed's yacht Jonikal on the French and Italian Riviera. 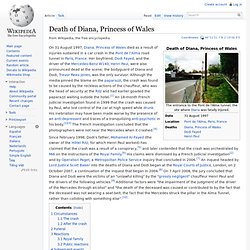 They had intended to stay overnight. Mohamed al-Fayed was and is the owner of the Hôtel Ritz Paris. He also owned an apartment in Rue Arsène Houssaye, a short distance from the hotel, just off the Avenue des Champs Elysées. Diana, Princess of Wales. Diana, Princess of Wales (Diana Frances;[fn 1] née Spencer; 1 July 1961 – 31 August 1997), was the first wife of Charles, Prince of Wales, who is the eldest child and heir apparent of Queen Elizabeth II.[2] After her marriage, she undertook a variety of public engagements. 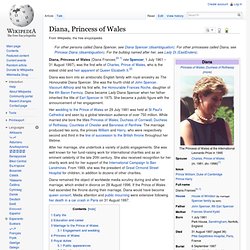 She was well known for her fund-raising work for international charities and as an eminent celebrity of the late 20th century. She also received recognition for her charity work and for her support of the International Campaign to Ban Landmines. From 1989, she was the president of Great Ormond Street Hospital for children, in addition to dozens of other charities. Diana remained the object of worldwide media scrutiny during and after her marriage, which ended in divorce on 28 August 1996. Squidgygate. Squidgygate refers to the pre-1990 telephone conversations between Diana, Princess of Wales and a close friend, James Gilbey, and to the controversy surrounding how those conversations were recorded. 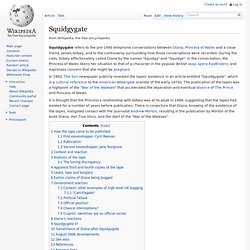 During the calls, Gilbey affectionately called Diana by the names "Squidgy" and "Squidge". In the conversation, the Princess of Wales likens her situation to that of a character in the popular British soap opera EastEnders, and expresses concern that she might be pregnant. How the tape came to be published[edit] Camillagate: Prince Charles and the Tampon Scandal. 1992 Windsor Castle fire. 1992-2001. The fifth decade of The Queen's reign led into a new century and the third millennium. 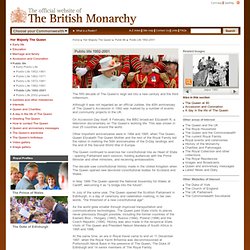 Although it was not regarded as an official Jubilee, the 40th anniversary of The Queen's Accession in 1992 was marked by a number of events and community projects in the UK. On Accession Day itself, 6 February, the BBC broadcast Elizabeth R, a television documentary on The Queen's working life. This was shown in over 25 countries around the world. Other important anniversaries were in 1994 and 1995, when The Queen, Queen Elizabeth The Queen Mother and the rest of the Royal Family led the nation in marking the 50th anniversaries of the D-Day landings and the end of the Second World War in Europe.

The Queen continued to exercise her constitutional role as Head of State - opening Parliament each session, holding audiences with the Prime Minister and other ministers, and receiving ambassadors. In May 1999 The Queen opened the National Assembly for Wales at Cardiff, welcoming it as "a bridge into the future".