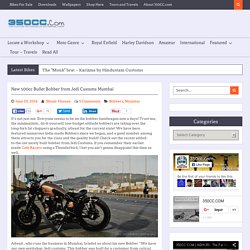 Everyone seems to be on the bobber bandwagon now a days! Trust me, the minimalistic, do-it-yourself, low-budget attitude bobbers are taking over the long-fork fat choppers gradually, atleast for the current state! We have here featured numerous India made Bobbers since we began, and a good number among them attracts you for the class and the quality build! Check out the recent added-to-the-list nicely built bobber from Jedi Customs. 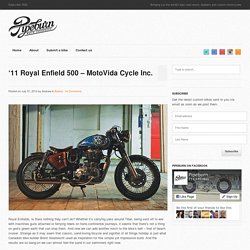 Is there nothing they can’t do? Whether it’s carrying yaks around Tibet, being sent off to war with machines guns attached or ferrying riders on trans-continental journeys, it seems that there’s not a thing on god’s green earth that can stop them. And now we can add another notch to the bike’s belt – that of beach cruiser. Strange as it may seem that classic, sand-loving bicycle and signifier of all things holiday is just what Canadian bike builder Brent Giesbrecht used as inspiration for this simple yet impressive build. And the results are so bang-on we can almost feel the sand in our swimmers right now. “My name is Brent Giesbrecht and I’m from Kelowna, Canada. Brent also tells us that he has always loved the beach cruiser bikes that fill Kelowna’s waterfront boardwalks. Royal Enfield Bullet by OEM. Old Empire Motorcycles, despite the magnificent name, is one of England’s newer custom builders. 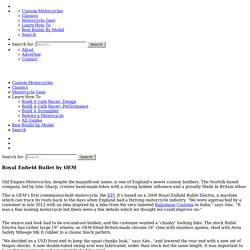 The Norfolk-based company, led by Alec Sharp, creates hand-made bikes with a strong bobber influence and a proudly Made In Britain ethos. This is OEM’s first commission-built motorcycle, the EFI. Enfield 350: the bike that time forgot. For most pro builders, personal projects usually draw the short straw—relegated to the back of the shop by a steady stream of client work. 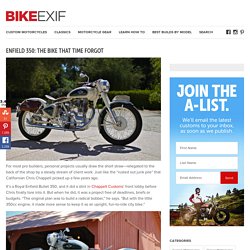 Just like the “rusted out junk pile” that Californian Chris Chappell picked up a few years ago. It’s a Royal Enfield Bullet 350, and it did a stint in Chappell Customs‘ front lobby before Chris finally tore into it. But when he did, it was a project free of deadlines, briefs or budgets. “The original plan was to build a radical bobber,” he says. “But with the little 350cc engine, it made more sense to keep it as an upright, fun-to-ride city bike.” The actual model year of this Enfield is a mystery: the original number plate indicated 1955, but no paperwork was filed prior to 1973. Given its age and the state it was in, the Enfield 350 needed a full, bare-bones strip down.

Every nut and bolt on the Enfield was replaced, along with a host of other parts—except for the fuel tank, fenders and toolboxes, which Chris opted to keep. For Motorcycle fans: Royal Enfield. First, the main video for Hero3+ cameras has already received more than 12 million views. 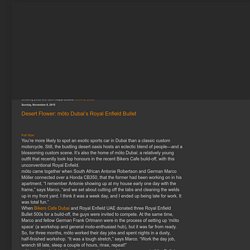 Second, it’s a full video about Royal Enfield touring in India. Third, the video features Alex Chacón, the guy who did 80,000+ miles in 500 days across the Americas. And finally, most importantly, it is the Vintage Rides team who contributed to this mind-blowing video by providing all the logistics for their motorcycle journey across India – yes, exciting! Having been contacted during the busiest season of the year, and with very short time to prepare for the trip, we are happy everything went smoothly and according to plan. Best Modified Royal Enfield (Bullet) Royal Enfield 500 Bobber EFI - for sale from 7/6/15. This is how a delectably done up Royal Enfield custom looks: Presenting, the Dodo Motorcycle! - Indian Cars Bikes.

The Hyundai Elantra now in its second generation in India received a facelift recently. 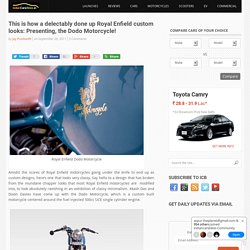 The Hyundai Elantra as a premium sedan has been selling in decent numbers across the globe and even here in India it has managed to keep the sales chart busy. Hyundai known to load all its car models with loads of equipment and feature list and safety features included. The fluidic design did wonders on the current generation Elantra and that is its biggest USP. Its time to move on and Hyundai is getting its next generation Elantra ready. Judging by the rendering provided by Hyundai, the new Elantra is a work of innovative design aspects that conform to Hyundai’s Fluidic Design Philosophy 2.0. The car now looks sleeker, more dynamic and stylish than ever all brought about by the bold character lines, large hexagonal grille upfront, and pronounced wheel arches making it appear a lot meaty. Royal Enfield 500cc Classic by Rajputana Custom Motorcycles. The Jaipur based custom shop Rajputana Custom Motorcycles is igniting the spark of the custom scene in India and has been crafting some serious bikes. 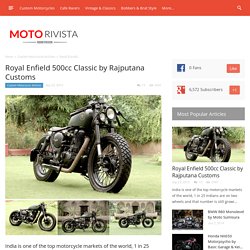 There is a reason they say Incredible India, my visit to India in 2004 was one of my best holiday experiences. India is known for it’s population, vast cultural diversity, exotic food, vibrant color, organized chaos, Bollywood, and of course the extreme love of cricket! Motorcycles are also an important part of daily life in India. In the hustle and bustle of that life its hard to imagine having the chance or opportunity to build a custom bike. We asked RCM owner Vijay to give a brief background on Rajputana Custom Motorcycles “Building bikes here at RCM has always been an eventful learning process. Royal Enfield Bobber: "The Machismo" (SOLD) Royal Enfield Machismo Transformed Into A Bobber by Ayyub Russell (Dubai) We have a lot of great articles about custom motorcycles that we hope you find interesting. 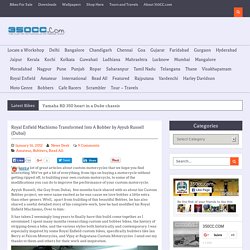 We’ve got a bit of everything, from tips on buying a motorcycle without getting ripped off, to building your own custom motorcycle, to some of the modifications you can do to improve the performance of your custom motorcycle. Ayyub Russell, the Guy from Dubai, few months back shared with us about his Custom Bobber project, we were same excited as he was cause we love bobber a little extra than other geners. Well, apart from building of this beautiful Bobber, he has also shared a useful detailed story of his complete work, how he had modified his Royal Enfield Machismo, Over to him : It has taken 2 seemingly long years to finally have this build come together as I envisioned. I spent many months researching custom and bobber bikes, the history of stripping down a bike, and the various styles both historically and contemporary.

It has been in process for 3 months now. Here are a list of parts: Bag.