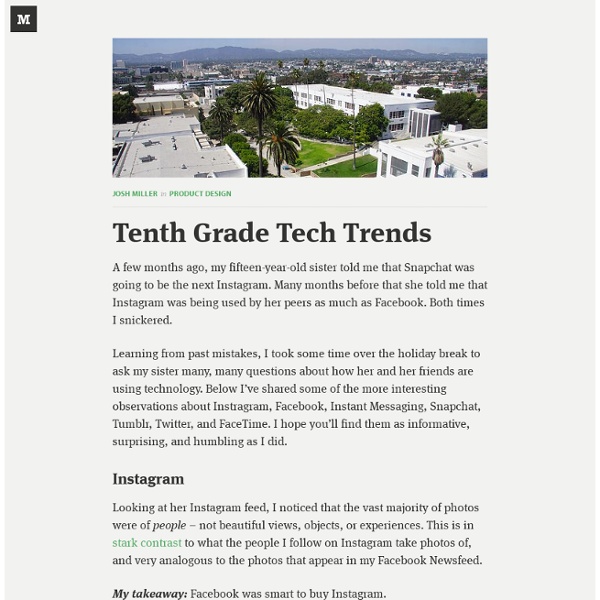 A few months ago, my fifteen-year-old sister told me that Snapchat was going to be the next Instagram. Many months before that she told me that Instagram was being used by her peers as much as Facebook. Both times I snickered. Learning from past mistakes, I took some time over the holiday break to ask my sister many, many questions about how she and her friends are using technology. Instagram Looking at her Instagram feed, I noticed that the vast majority of photos were of people – not beautiful views, objects, or experiences. My takeaway: Facebook was smart to buy Instagram. Facebook She mentioned that she tries to visit Facebook as infrequently as possible. My takeaway: Facebook may have an irreversibly bad brand. Instant Message While much of my childhood was spent instant messaging, on AIM and then Facebook Chat, my sister says she and her friends rarely IM with each other. Most of my sister’s friends’ post-school communication takes place on iOS apps, such as iMessage and Snapchat.

11 Big Tech Trends You'll See in 2013 Writing prediction pieces is a funny thing because there is really no such thing as “next year.” Time is a continuum, and the calendar is a human construct designed to help us keep organized. Things that will happen “next year” are already happening now, we may simply not take note of them until the sun rises and sets dozens and dozens of times. So as I look to 2013, I realize that much of which I expect to see in the coming 12-to-14 months has been quietly (or not so quietly) developing for months, even years. From my point of view, it’s unlikely 2013 will contain any revolutionary or ground-breaking advancements in technology, social media or even the nexus of the two. On the other hand, I can tell you about the trends that will make a difference “next year.” 1. Photo by Nina Frazier Here are some stats for you: In other words, the Second Screen has arrived, but the revolution awaits us. Marketers see blood in the water, and in 2013 they will release the sharks. 2. 3. 4. 5. 6. 8. 9. 10.

Tech Jobs In 2013: Open Source All The Way Down It's a good time to be in technology. According to the December 2012 Dice hiring survey, 64% of hiring managers and recruiters surveyed expect to hire more tech employees in the first six months of the year, versus 47% for non-tech roles. Life looks even better for tech professionals with open source experience. That's because the industry's hottest trends are being driven by open-source software. Used with permission from Indeed.com. PaaS, which isn't uniformly open source, has prominent open-source offerings like VMware's Cloud Foundry and Red Hat's OpenShift helping drive the market. It's Not Just Open Source Yes, I know. In Big Data, demand is high for know-how in a range of open-source projects, as Dice and Wikibon note. Cloud computing, too, is largely an open-source phenomenon, though the 8,000-pound gorilla known as Amazon is hardly a big open-source contributor. Training Made Easier Which leaves us with just one problem: how to get trained on all this great open-source software?

The Future Is Now: What We Imagined for 2013 — 10 Years Ago | Gadget Lab Predicted for 2003 (above):Apple redefined the desktop, laptop, and MP3 player. The next insanely great thing: an LCD arm cuff that includes a PDA, wireless Internet, a mini iPod, and, of course, a phone. The iPhone bracelet's motion sensor allows you to scroll through apps and files with the flick of a wrist, its clasp holds a digicam for use during video calls, and its wireless ear clip lets you listen and speak to callers. Looking ahead to 2023:Flexible displays are so 2013.

SAP and the ‘Nexus of Forces’ A perfect storm is developing, according to research firm Gartner. Four hugely disruptive technology trends are converging, bringing change and opportunity to the way businesses operate, and restructuring the IT industry as a whole. Gartner calls this the “Nexus of Forces”. It sounds like a old-style superhero, but it actually refers to four distinct yet increasingly intertwined technological trends: social, mobile, cloud computing and information: Social. Social is the most accessible of the four Nexus forces. SAP has intensively covered the disruption from Mobile, Cloud, and Information. But this year’s SAPPHIRE NOW conference in Madrid will be the first to cover the full Nexus of Forces, by filling out the cloud story, and adding more substantial social strategy. At this conference, we can look forward to keynotes that tell the entire end-to-end story of how SAP will help customers with the opportunities and challenges of the the Nexus Forces outlined by Gartner: Gartner predicts that: