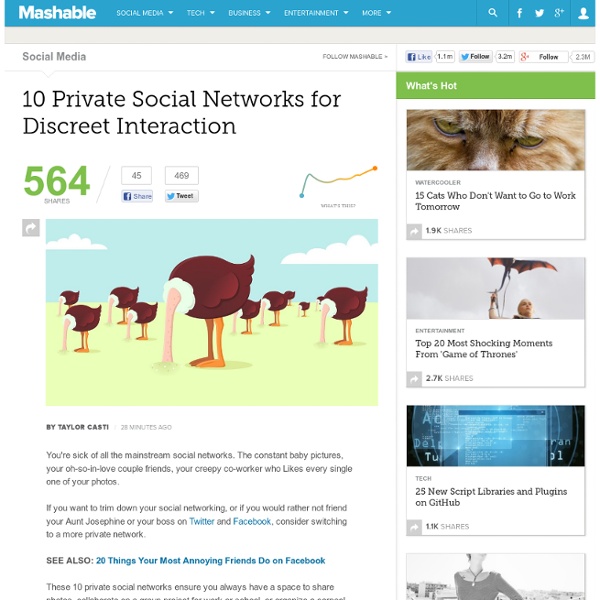 You're sick of all the mainstream social networks. The constant baby pictures, your oh-so-in-love couple friends, your creepy co-worker who Likes every single one of your photos. If you want to trim down your social networking, or if you would rather not friend your Aunt Josephine or your boss on Twitter and Facebook, consider switching to a more private network. These 10 private social networks ensure you always have a space to share photos, collaborate on a group project for work or school, or organize a carpool to this week's neighborhood softball game. 1. Everyme Image courtesy of Apple Like Google+, Everyme sorts your contacts into circles, allowing users to share content with one or more circles at a time. 2. 23Snaps For parents who can't resist the urge to post baby pictures, meet 23Snaps. 3. Like 23 Snaps, Notabli allows users to privately share photos and videos of their children with other family members, with the added benefits of audio, text messages and drawings. 4. 5. 6. 7. 8. Related:  Family apps • Social Networks

Former Flip Video Execs Launch Hubble, A Private Network For Families Hubble, a new mobile application for private social networking created by the team that developed Flip Video, is launching today to serve as the secure hub (get it? Hubble?) for family communication. The app currently supports text messaging, voice messages, photo and location sharing and alerts, and may extend into other real-time communication methods like voice and video in the future, too. In an age when so many families have adopted smart devices – even the kids – it’s somewhat remarkable that no single service has managed to become a centralized place where family members go to connect with each other, share news, and generally communicate. One could argue that Facebook is exactly this place, but it’s not really. So for the team behind Hubble, the lack of a default winner in the private, family networking space is seen as a huge gap in the market which it aims to fill. Hubble’s Family Hub

Everyme Has A New Project: Origami, A Private Sharing Service For Families Everyme, the Y Combinator-backed startup with an app focused on private social circles, is announcing a new product today called Origami, which customizes the private sharing concept for a specific group — families. Co-founder and CEO Oliver Cameron says he isn’t abandoning the Everyme product. In fact, the company just launched a version for Android tablets. But with six people, trying to work on both apps at once would be a strain, so the team will be focusing on Origami for the next few months before turning its attention back to Everyme. (Cameron’s also hoping to hire more people. “We love Everyme,” Cameron says. For a while? As for why he’s building Origami in the first place, Cameron says the response to Everyme suggested that there was real interest in private sharing among families, but he thinks the use case “deserves its own product.” We are building Origami.com to make it so easy and delightful to stay in touch consistently that you will actually do it.

6 Core Principles to Tap the Power of Social Community Participation Gartner reports that many business and IT leaders fail at utilizing social media effectively because they do not understand mass collaboration. Many businesses use a “provide and pray” approach, expecting online community participation to just happen. It’s just one of the reasons why communities fail. What happens instead is that users have an initial interest and then lose that interest as they discover that the platform is too difficult to use collaboratively. Applying the six core design principles creates a better social media environment for meaningful collaboration and social community participation, Gartner says. 1. User and community participation is the driving force behind successful mass collaboration. The design becomes driven by this goal instead of making a social outlet where people can easily participate in the conversation and add meaningful content. 2. A purpose must be meaningful, identifiable and clearly defined for the target audience. 3. 4. 5. 6.

Sunny with a Chance of Sprinkles: Karoo App Review #doyoukaroo As a student nurse and mother, I have to leave Alea with a sitter roughly 20 hours a week. It's not ideal, as I would of course prefer to be with my babe every waking moment, but if I want to accomplish my goal if becoming a registered nurse, it's just something that I have to do! She absolutely loves it over at Jenna's house and loves playing with Evan who is just 6 months younger than her, but sometimes I still feel like I'm missing out on things. Not anymore though! In this day and age, time is everything and being able to update one another from this app while I'm in school or if I have something I forgot to tell her when I dropped Alea off, I can quick update her through this app! Not only can Jenna & I update each other, but we can also update my family who also download this app! Now come on, don't you want to Karoo too? I participated in this review as part of a social media promotion and was not compensated for this post. this month's featured ad:

Social Envy - Study Finds Facebook Causes Depression And Isolation BERLIN - Social networks like Facebook make many things easier. You can find out right away if Alex got the job or not, and you can not only read about Marie’s vacation, but you can also see all those pictures of her on the beach, too. There’s also a downside to this. Researchers have conducted tests that show that people who spend a lot of time scrolling on Facebook are more socially isolated and more frequently depressed than those who do not. The question, of course, poses itself: are lonely people more drawn to social networks – or does constant surfing result in loneliness over time? While it wasn’t able to answer the question conclusively, a joint research study conducted by Berlin’s Humboldt University and the Darmstadt’s Technical University did however reveal that spending time on social networks could lead to negative feelings. The German researchers, led by Dr. The never-ending “envy spiral”

Care.com Launches Karoo App For Parents and Caregivers To Stay Connected Care.com has launched a new application called Karoo, which helps busy working moms stay in touch with their children on days that they cannot be around. Care.com is the world’s largest online care destination. Parents can receive updates on feeding, naps, videos, or photos from soccer practice. Karoo helps parents, caregivers, and relatives stay connected and share childhood moments as they happen. Karoo has a Digital Memory Book where you can capture and share moments for big milestones as they happen. The app has a private network so that you can share what you want, when you want, and with whom you want. For family members that do not have a smartphone, Karoo is available on the web so that everyone can participate. Care.com is an online care destination with 7 million users across 15 countries. Fortune 500, educational institutions, technology companies, and professional services offer Care.com memberships as a benefit to employees through its Workplace Solutions program.