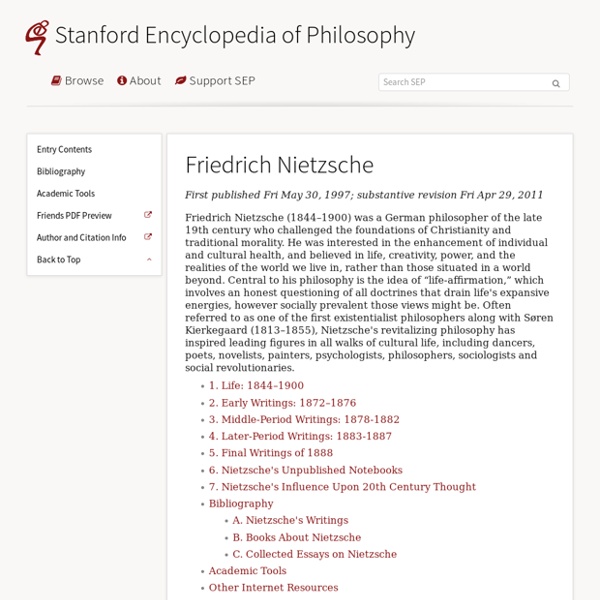 1. Life: 1844–1900 In the small German village of Röcken bei Lützen, located in a rural farmland area southwest of Leipzig, Friedrich Wilhelm Nietzsche was born at approximately 10:00 a.m. on October 15, 1844. Nietzsche's uncle and grandfathers were also Lutheran ministers, and his paternal grandfather, Friedrich August Ludwig Nietzsche (1756–1826), was further distinguished as a Protestant scholar, one of whose books (1796) affirmed the “everlasting survival of Christianity.” When Nietzsche was nearly 5 years old, his father, Karl Ludwig Nietzsche (1813–1849) died from a brain ailment (July 30, 1849) and the death of Nietzsche's two-year-old brother, Ludwig Joseph, traumatically followed six months later (January 4, 1850). From the ages of 14 to 19 (1858–1864), Nietzsche attended a first-rate boarding school, Schulpforta, located about 4km from his home in Naumburg, where he prepared for university studies. 2. 3. In Daybreak: Reflections on Moral Prejudices (Morgenröte. 4. 5. 6. 7.

Nietzsche, Friedrich  Nietzsche was a German philosopher, essayist, and cultural critic. His writings on truth, morality, language, aesthetics, cultural theory, history, nihilism, power, consciousness, and the meaning of existence have exerted an enormous influence on Western philosophy and intellectual history. Nietzsche spoke of "the death of God," and foresaw the dissolution of traditional religion and metaphysics. Some interpreters of Nietzsche believe he embraced nihilism, rejected philosophical reasoning, and promoted a literary exploration of the human condition, while not being concerned with gaining truth and knowledge in the traditional sense of those terms. Nietzsche claimed the exemplary human being must craft his/her own identity through self-realization and do so without relying on anything transcending that life—such as God or a soul. Table of Contents 1. Friedrich Wilhelm Nietzsche was born October 15, 1844, the son of Karl Ludwig and Franziska Nietzsche. 2. (i.) before 1869—the juvenilia 3.

Jean-Paul Sartre 1. Philosophical Development Sartre was born in Paris where he spent most of his life. After a traditional philosophical education in prestigious Parisian schools that introduced him to the history of Western philosophy with a bias toward Cartesianism and neoKantianism, not to mention a strong strain of Bergsonism, Sartre succeeded his former school friend, Raymond Aron, at the French Institute in Berlin (1933–1934) where he read the leading phenomenologists of the day, Husserl, Heidegger and Scheler. He prized Husserl's restatement of the principle of intentionality (all consciousness aims at or “intends” an other-than-consciousness) that seemed to free the thinker from the inside/outside epistemology inherited from Descartes while retaining the immediacy and certainty that Cartesians prized so highly. Sartre had long been fascinated with the French novelist Gustave Flaubert. In his last years, Sartre, who had lost the use of one eye in childhood, became almost totally blind. 2. 3. 4.

axioms Contents Contents | rgb Home | Philosophy Home | Axioms | Other Books by rgb: | The Book of Lilith | Axioms is a work that explores the true nature of human knowledge, in particular the fundamental nature of deductive and inductive reasoning. The way out is to give up the idea of certain knowledge. Axioms by Robert G. Dedication This book is dedicated to the giants of mathematical and scientific philosophy upon whose backs it stands: Plato, Hume, Descartes, Gödel, Bayes, Shannon, Cantor, Cox, Jaynes, and many more, too many to count, actually. It is also dedicated to my philosophy professor and guru at Duke, George Roberts, who had an enormous impact on me as I pursued an ``invisible'' philosophy major at Duke to accompany my physics major (invisible because at the time Duke had no way of acknowledging the completion of a Bachelor of Science in one discipline and a Bachelor of Arts in another). No book is written in a vacuum. Notice Copyright Notice Copyright Robert G. Lulu Press www.lulu.com

Critical Thinking On The Web Top Ten Argument Mapping Tutorials. Six online tutorials in argument mapping, a core requirement for advanced critical thinking.The Skeptic's Dictionary - over 400 definitions and essays. The Fallacy Files by Gary Curtis. Best website on fallacies. Butterflies and Wheels. What is critical thinking? Nobody said it better than Francis Bacon, back in 1605: For myself, I found that I was fitted for nothing so well as for the study of Truth; as having a mind nimble and versatile enough to catch the resemblances of things … and at the same time steady enough to fix and distinguish their subtler differences; as being gifted by nature with desire to seek, patience to doubt, fondness to meditate, slowness to assert, readiness to consider, carefulness to dispose and set in order; and as being a man that neither affects what is new nor admires what is old, and that hates every kind of imposture. A shorter version is the art of being right. More definitions... Program for Critical Thinking 6 Dec 21 May

Download Audio Books with Audible.com Online Digital Audio Book Store 111 Lessons Life Taught Us Sometimes thinking about your life and sorting out what you have learned is just as important as tackling a new venture. That’s what our new sister site, Everyday Life Lessons, is all about. It’s an online community where people share, rank and discuss life’s greatest lessons. The site challenges you to reflect on your past, dig deep within yourself and answer one simple question: What has life taught you? Think about all the things you would love to tell yourself if you could travel back in time to give your younger self some advice about life. Here’s a sample of 111 life lessons that were recently submitted to the site: Spend more time with those who make you smile and less time with those who you feel pressured to impress.Never tell someone their dreams are impossible. Everyday Life Lessons is updated daily. Photo by: Lauren Macdonald Related 7 Important Life Lessons Everyone Learns the Hard Way “People never learn anything by being told, they have to find out for themselves.” May 11, 2012

The Meaning of Life 1. The Meaning of “Meaning” One part of the field of life's meaning consists of the systematic attempt to clarify what people mean when they ask in virtue of what life has meaning. This section addresses different accounts of the sense of talk of “life's meaning” (and of “significance,” “importance,” and other synonyms). A large majority of those writing on life's meaning deem talk of it centrally to indicate a positive final value that an individual's life can exhibit. Beyond drawing the distinction between the life of an individual and that of a whole, there has been very little discussion of life as the logical bearer of meaning. Returning to topics on which there is consensus, most writing on meaning believe that it comes in degrees such that some periods of life are more meaningful than others and that some lives as a whole are more meaningful than others (perhaps contra Britton 1969, 192). 2. 2.1 God-centered Views 2.2 Soul-centered Views 3. 3.1 Subjectivism 3.2 Objectivism 4.

how am i not myself? In the fantastic I ♥ Huckabees, we watch Jude Law’s character devolve from a self assured cocky jerk (putting it mildly) into a man in the grips of a nervous breakdown and identity crisis, all while the words “how am I not myself” repeat endlessly in his head. Is it possible for you to behave in such a way that “you’re not being yourself”? Is the question meaningless or an incredibly piercing and thought provoking thought experiment? As usual, I think a bit of both. In a recent article, Joshua Knobe discussed two alternate notions of what we normally think of when thinking about a person’s “true self”. But I think what we’ve set up here to this point is a false dichotomy between the idea that your true self is your genetics and instincts and that your true self is your values and commitments. I think that Alexandre is right on with this. This gets us to a much more fundamental point in this conversation, which in a sneaky way has already led us astray from the very beginning.