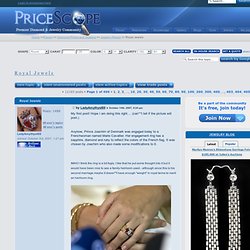 Hope I am doing this right.... (can''''t tell if the picture will post.) Anyhow, Prince Joachim of Denmark was engaged today to a Frenchwoman named Marie Cavallier. Her engagement ring has a sapphire, diamond and ruby to reflect the colors of the French flag. It was chosen by Joachim who also made some modifications to it.

IMHO I think the ring is a bit fugly. The Royal Order of Sartorial Splendor: Jewel Central. From spotlights on individual pieces to glittering events chock full of tiaras, find all the major royal jewels covered on this blog right here! 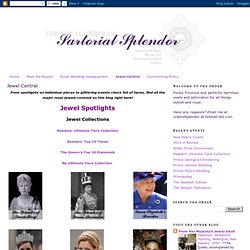 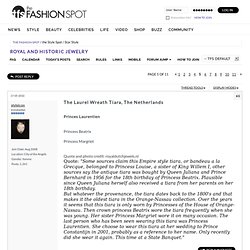 Italy's Princess Maria Gabriella of Savoy is auctioned off 41 lots of rare jewelsin order to help pay her taxes. All this from ONE stone: Jewellery from world's largest diamond goes on display at Buckingham palace. The Cullinan Diamond, weighing 3,106 carats in its rough state, was first discovered in 1905 at a mine near Pretoria in South AfricaIt was originally thrown away as it was thought it to be too large to be a diamondOnce recovered, it was presented to King Edward VII as a gift and cuts were used in the Crown JewelsOther cuts were used to make brooches, necklaces and earrings worn by royalty including Queen Elizabeth II throughout her 60-year reignSeven of the nine cuts of the gem are to go on public display at Buckingham Palace this summer to celebrate Queen's Diamond Jubilee By Rebecca English Published: 14:21 GMT, 15 May 2012 | Updated: 08:30 GMT, 16 May 2012 Of all the celebrations planned for the Queen’s Diamond Jubilee, it is perhaps the most fitting. 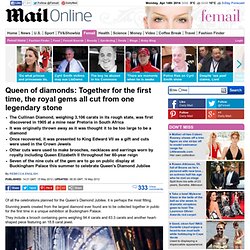 Stunning jewels created from the largest diamond ever found are to be collected together in public for the first time in a unique exhibition at Buckingham Palace. Jewellery of Today's British Royalty - The Tudors Wiki. Imperial Treasury. Crown jewels. The Crown Jewels. The Crown Jewels are displayed at the Jewel House in the Tower of London and can be viewed there by the public. 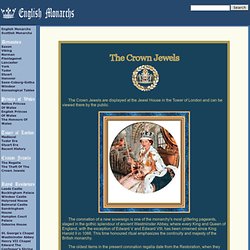 The coronation of a new sovereign is one of the monarchy's most glittering pageants, staged in the gothic splendour of ancient Westminster Abbey, where every King and Queen of England, with the exception of Edward V and Edward VIII, has been crowned since King Harold II in 1066. This time honoured ritual emphasizes the continuity and majesty of the British monarchy. The oldest items in the present coronation regalia date from the Restoration, when they were made for the coronation of King Charles II. 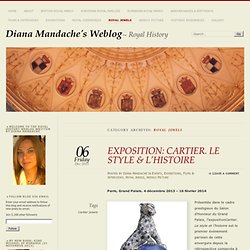 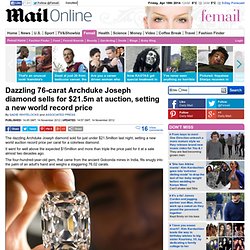 It went for well above the expected $15million and more than triple the price paid for it at a sale almost two decades ago. The four-hundred-year-old gem, that came from the ancient Golconda mines in India, fits snugly into the palm of an adult's hand and weighs a staggering 76.02 carats. Top dollar:The dazzling Archduke Joseph Diamond set a new world auction record last night, as it went under the hammer for just under $21.5million The Archduke Joseph Diamond, with perfect color and internally flawless clarity, went for $21,474,525 including commission at Christie's' Magnificent Jewels sale in Geneva. Imperial Treasury. Do you have a dream tiara? Jewellery of Today's British Royalty - The Tudors Wiki.