Maps of the USA

22 Maps That Show The Deepest Linguistic Conflicts In America. Tornado severity in the US. Top 10 US Cities by Population by Decade. Americans who are likely to own guns VS Americans who are likely to graduate college. 'How do I...' autofill by state. The Most Common Job In Every State. *We used data from the Census Bureau, which has two catch-all categories: "managers not elsewhere classified" and "salespersons not elsewhere classified. 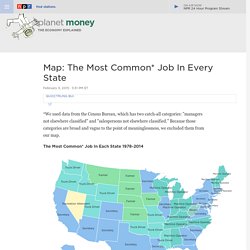 " Because those categories are broad and vague to the point of meaninglessness, we excluded them from our map. What's with all the truck drivers? Truck drivers dominate the map for a few reasons. Driving a truck has been immune to two of the biggest trends affecting U.S. jobs: globalization and automation. A worker in China can't drive a truck in Ohio, and machines can't drive cars (yet). The rise and fall of secretaries: Through much of the '80s, as the U.S. economy shifted away from factories that make goods and toward offices that provide services, secretary became the most common job in more and more states.

Manufacturing jobs disappeared: This story we knew already. Fewer and fewer farmers: Our map shows the tail end of a century-long trend. Map of the U.S. State's Denomonyms. America's stance on Gay Marriage. Race and Ethnicity in New York City. Human map of the US (1925) Obesity in US and Canada. Where the Mormons Live. Subsets of United States counties with the highest population densities. Minority distribution in the USA. Most popular locations for "missed connections" on Craigslist. What Religion Does Your Member Of Congress Identify With. Map of New York City. Legality of cannabis by U.S. jurisdiction. Cannabis laws in the United States1 Jurisdiction with legalized cannabis. 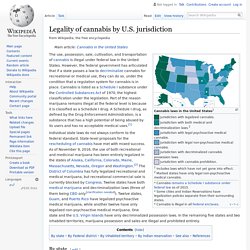 By state[edit] By Federal district[edit] By Indian reservation[edit] See also[edit] References[edit] Which country do you live closest to? Slave Population of the Southern States (1860) Slave-run cotton farms laid on top of counties that voted 'Democrat' in 2008. Minimum income of Top 1% by State. State Flowers of America. US Presidents by Birthplace. Same-sex marriage status in the U.S. The Best Map Ever Made of America's Racial Segregation. Last year, a pair of researchers from Duke University published a report with a bold title: “The End of the Segregated Century.” 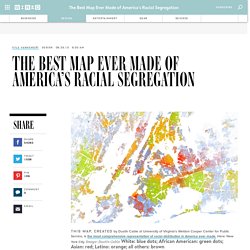 U.S. cities, the authors concluded, were less segregated in 2012 than they had been at any point since 1910. But less segregated does not necessarily mean integrated–something this incredible map makes clear in vivd color. The map, created by Dustin Cable at University of Virginia’s Weldon Cooper Center for Public Service, is stunningly comprehensive. Drawing on data from the 2010 U.S. Census, it shows one dot per person, color-coded by race. This is the most comprehensive map of race in America ever created. White people are shown with blue dots; African-Americans with green; Asians with red; and Latinos with orange, with all other race categories from the Census represented by brown. Looking at the map, every city tells a different story. Click to Open Overlay Gallery In the Midwest, though, the racial divide can be shockingly exact. Go Back to Top. 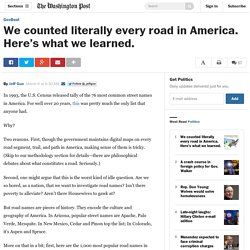 Census released tally of the 76 most common street names in America. For well over 20 years, this was pretty much the only list that anyone had. Why? Two reasons. First, though the government maintains digital maps on every road segment, trail, and path in America, making sense of them is tricky. Second, one might argue that this is the worst kind of idle question. But road names are pieces of history. More on that in a bit; first, here are the 1,000 most popular road names in America as calculated from 2014 road data. USA Interstate System. 35 years of suicide rates in the USA. A Guide to America (for Australians)