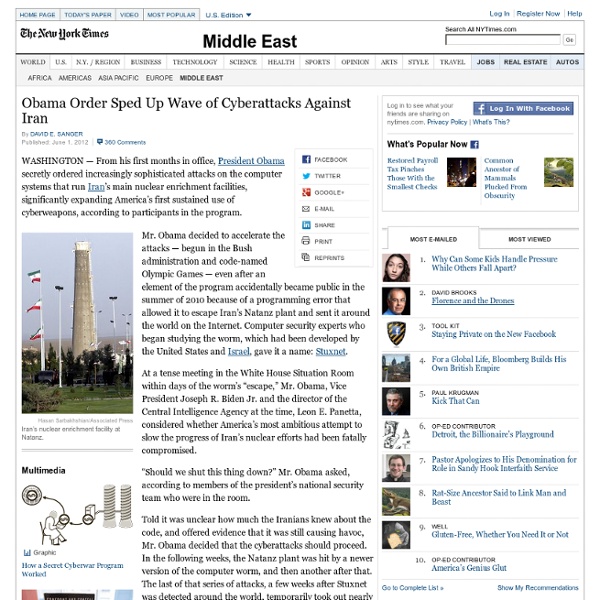 A Cyberworm that Knows No Boundaries Iran's announcement that a computer worm called Stuxnet had infected computers that controlled one of its nuclear processing facilities marked a signal event in cyber attacks. Although such attacks were known to be theoretically possible, the incident proved that a cyberworm could successfully infiltrate a system and produce physical damage. Furthermore, the sophisticated nature of the worm and the resources that would have been required to design, produce, and implant it strongly suggest a state-sponsored effort. It has become clear that Stuxnet-like worms pose a serious threat even to infrastructure and computer systems that are not connected to the Internet.

Gaza and Israel: The Road to War, Paved by the West JERUSALEM — AS fires rockets at Israeli cities and follows up its extensive airstrikes with a ground operation in the , the most immediate cause of this latest war has been ignored: Israel and much of the international community placed a prohibitive set of obstacles in the way of the “national consensus” government that was formed in early June. That government was created largely because of Hamas’s desperation and isolation. The group’s alliance with Syria and Iran was in shambles. Seeing a region swept by popular protests against leaders who couldn’t provide for their citizens’ basic needs, Hamas opted to give up official control of Gaza rather than risk being overthrown. Yet, in many ways, the reconciliation government could have served Israel’s interests. Israel strongly opposed American recognition of the new government, however, and sought to isolate it internationally, seeing any small step toward Palestinian unity as a threat.

FBI intent on sniffing out those who leaked possible US Stuxnet role Federal investigators in the US are tightening the screws on former senior government officials who might have leaked info about the Stuxnet worm, according to The Washington Post. Last June, Attorney General Eric H. Holder Jr. started the inquiry into loose lips. As Naked Security recounts here, the Stuxnet virus was seemingly created by the US, under the regime of President George W. The US pulled Israel into the cyber-espionage effort, with stunning results. Those results included slowing down and speeding up a centrifuge's delicate parts, which resulted in damage so extreme that, according to The New York Times, debris from a damaged centrifuge was laid across the conference table at the White House's Situation Room to demonstrate the malware's potential power. But the obligingly destructive Stuxnet spun out of control and escaped into the wider world, damaging systems well beyond Iran. The code name for the Stuxnet operation was Olympic Games. The Guardian's Greenwald writes:

Senate rejects bill on veterans benefits The largest piece of veterans legislation in decades -- aimed at expanding health care, education and other benefits -- was rejected Thursday by the Senate on a procedural issue after proponents failed to obtain 60 votes to keep the bill alive. Wrangling over an issue -- veterans -- that often receives bipartisan support, the legislation died on a vote of 56-41, with only two Republicans voting for it. Most Republicans said it was too large, too costly and would burden a Department of Veterans Affairs already struggling to keep up with promised benefits. Sen Bernie Sanders, the Vermont independent and chairman of the Senate Veterans' Affairs Committee who authored the bill, argued that many provisions in the bill have won bipartisan support in other pieces of pending legislation before Congress. Republicans complained about how to pay for it. Sanders' legislation had more than 140 provisions costing $21 billion over 10 years. The bill was supported by nearly all veterans groups.

Stuxnet was dated 2005, Symantec discovered earlier version 0,5 - Security Affairs Rivers of words have been written on the popular Stuxnet virus, there have been many hypotheses, sometimes contradictory, about its paternity but the only certainty seemed to be the date of its creation, but suddenly the certainty as happen tin he best thriller movies has been called into question. The authors of Stuxnet, the malware that hit Iranian nuclear plant in 2010 interfering with nuclear program of the Government of Teheran, started the operations earlier than previously demonstrated according a new research proposed by Symantec firm. According the study conducted by Symantec there was a predecessor of the final version of the virus, a development version that was spread in 2005 and the was designed to manipulate the nuclear facility’s gas valves. Francis deSouza, Symantec’s president of products and services, commented to Bloomberg: Symantec highlighted the differences of version 0.5 with subsequent instances of Stuxnet: The study states: Pierluigi Paganini

How do we know income inequality is getting worse? President Obama will make economic inequality a central theme of his State of the Union address on Tuesday, according to reports, highlighting the issue's emergence as a key political issue. Less clear is whether economics itself has much to offer in ensuring that the gains of economic growth are distributed equitably. As Harvard Business Review executive editor Justin Fox recently wrote: I think we’re eventually going to have to figure out what if anything to do about exploding high-end incomes without clear guidance from the economists. This is a discussion where political and moral considerations may end up predominating. That is, economics can be helpful in characterizing the degree of inequality that exists, and it can help to explain why income is distributed so unequally. Where economists have done a bit better is in characterizing the degree of inequality, but even here there is some disagreement. There are two common two common ways of measuring the degree of inequality.

US-Israeli Stuxnet Cyber-attacks against Iran: “Act of War” A group of 20 law and technology experts has unanimously agreed that the Stuxnet worm used against Iran in 2009-2010 was a cyberattack. The US and Israel have long been accused of collaborating on the virus in a bid to damage Iran’s nuclear program. While that accusations against Washington and Tel Aviv have never been confirmed by either government, a NATO Commission has now confirmed it as an “ act of force. ” Last year anonymous government officials came forward to tell The New York Times that researchers at the Idaho National Laboratory, which is overseen by the US Department of Energy, passed technical information to Israel regarding vulnerabilities in cascades and centrifuges at Iran’s Natanz uranium enrichment plant. That information, it is believed, was used to design the Stuxnet worm that set Iran’s nuclear program back an estimated two years. Schmitt told The Washington Times that “ according to the UN charter, the use of force is prohibited, except in self-defense .”

Poverty Analysis - Measuring Inequality A second definition of welfare which is often considered in analysis is that of ‘relative’ poverty, defined as having little in a specific dimension compared to other members of society. This concept is based on the idea that the way individuals or households perceive their position in society is an important aspect of their welfare. To a certain extent, the use of a relative poverty line in the previous sections does capture this dimension of welfare by classifying as ‘poor’ those who have less than some societal norm. The overall level of inequality in a country, region or population group – and more generally the distribution of consumption, income or other attributes – is also in itself an important dimension of welfare in that group. Inequality measures can be calculated for any distribution—not just for consumption, income or other monetary variables, but also for land and other continuous and cardinal variables. Related Sites: Back to Measuring Poverty