Games and Activities about America 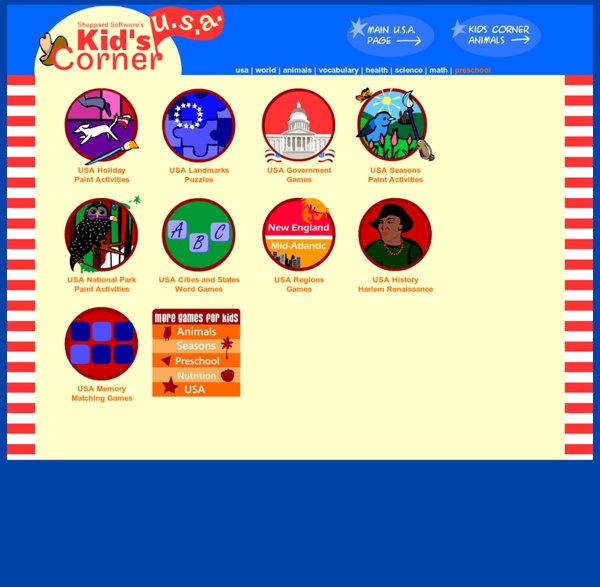 New Zealand English To the untrained ear, the Southern Hemisphere accents — Australian, New Zealand and South African — are rather similar. This may have to do with the fact that it is much easier to travel between these places than from any of them to Britain or North America. Listen more closely, however, and you'll hear that the accents have in fact developed in different directions. This young woman, like many New Zealanders, uses the word "Kiwi" to refer to both herself and her way of speaking. The kiwi is a national symbol of New Zealand — if you're talking about a flightless bird with a long beak. The kiwi fruit, although often imported from New Zealand, is native to China. Printable English Grammar Exercises, ESL Grammar Worksheets ESL Lesson Plans & Resources for Kids Kiz School provides: Video Tutorials, PPT, Interactive Games & Quizzes, Printable PDF Worksheets & Flashcards, among others. You don't need to be a professional teacher to use our materials.It is an effective, affordable private and public teaching solution for parents and schools.

101 Innovations in Scholarly Communication: How researchers are getting to grip with the myriad of new tools. There has been a surge of new scholarly communication tools in recent years. But how are researchers incorporating these tools into their research workflows? Jeroen Bosman and Bianca Kramer are conducting a global survey to investigate the choices researchers are making and why. Insights from these surveys will be valuable for libraries, research support, funders, but also for researchers themselves. Are we witnessing a major overhaul of scholarly communication rules and tools? American History in VOA Special English There are 246 fifteen-minute programs and 5 four-minute programs. That is about 62 hours of listening. About 'The Making of a Nation' Radio Program Introduction and Overview of 'The Making of a Nation' (You may skip this one.) 1400s-1500s

Virtual Fieldtrips The concept of Virtual Field trips has been around for a long time. In the past they have been very structured. Developers and educators have created the websites and content focused on the specific needs of the target audience and subject area. This is a great strength, but it is also a limitation. It is limited by what the developer/educator thought was important and what they wanted to achieve. Web 2.0 technologies are allowing us to construct our own "virtual field trips".

Must-See New York – Top NYC Attractions, Landmarks, Statue of Liberty, Empire State Building top attractions by nycgo.com staff Central Park. English Timeline This interactive timeline allows you to explore the evolution of English language and literature, from the 11th century to the present day. Scroll through decade by decade to investigate the richness and diversity of our poetry and prose, as well as the many social, cultural and political strands from which our language has been woven. The timeline includes a fascinating combination of texts: Anglo Saxon tales and medieval illuminations; iconic literary manuscripts and printed texts; as well as letters, newspapers, handbills, posters, charters, speeches and campaign leaflets. Launch the interactive Flash timeline above, or explore the collections within each of the centuries below. Beowulf, Anglo Saxon monsters & more...