Dinopithecus size comparison. Look What You've Done, North America! Extinct Megafauna Size Chart. Multituberculata. The Multituberculata were a group of rodent-like mammals that existed for approximately one hundred and twenty million years—the longest fossil history of any mammal lineage—but were eventually outcompeted by rodents, becoming extinct during the early Oligocene.[1] At least 200 species are known, ranging from mouse-sized to beaver-sized. 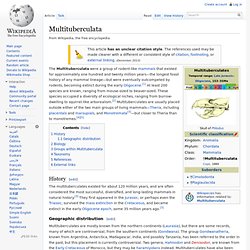 These species occupied a diversity of ecological niches, ranging from burrow-dwelling to squirrel-like arborealism.[2] Multituberculates are usually placed outside either of the two main groups of living mammals—Theria, including placentals and marsupials, and Monotremata[3]—but closer to Theria than to monotremes.[4][5] History[edit] Geographic distribution[edit] Multituberculates are mostly known from the northern continents (Laurasia), but there are some records, many of which are controversial, from the southern continents (Gondwana). Biology[edit] Restoration of Catopsbaatar A ptilodont that throve in North America was Ptilodus. Extinct felids from the Americas during the Late Pleistocene period. Scientists Discover Blood inside 15,000 ya Mammoth. Russian scientists claimed Wednesday they have discovered blood in the carcass of a woolly mammoth, adding that the rare find could boost their chances of cloning the prehistoric animal. 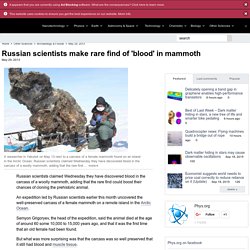 An expedition led by Russian scientists earlier this month uncovered the well-preserved carcass of a female mammoth on a remote island in the Arctic Ocean. Semyon Grigoryev, the head of the expedition, said the animal died at the age of around 60 some 10,000 to 15,000 years ago, and that it was the first time that an old female had been found. But what was more surprising was that the carcass was so well preserved that it still had blood and muscle tissue. "When we broke the ice beneath her stomach, the blood flowed out from there, it was very dark," Grigoryev, who is a scientist at the Yakutsk-based Northeastern Federal University, told AFP. "This is the most astonishing case in my entire life. "The forelegs and the stomach are well preserved, while the hind part has become a skeleton. " The Short-Faced Bear. Cave Bear size comparison. Glyptodon. Evolution[edit] Restoration Glyptodon carapace fragment (Pleistocene). 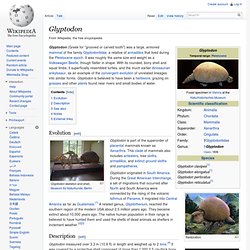 Glyptodon is part of the superorder of placental mammals known as Xenarthra. This clade of mammals also includes anteaters, tree sloths, armadillos, and extinct ground sloths and pampatheres. Glyptodon originated in South America. Description[edit] Glyptodon measured over 3.3 m (10.8 ft) in length and weighed up to 2 tons.[4] It was covered by a protective shell composed of more than 1,000 2.5 cm-thick bony plates, called osteoderms or scutes. The nasal passage was reduced with heavy muscle attachments for some unknown purpose. See also[edit] Doedicurus Notes[edit] External links[edit] Paraceratherium skull. 10 fascinating facts about woolly mammoths. 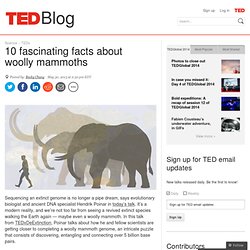 It’s a modern reality, and we’re not too far from seeing a revived extinct species walking the Earth again — maybe even a woolly mammoth. In this talk from TEDxDeExtinction, Poinar talks about how he and fellow scientists are getting closer to completing a woolly mammoth genome, an intricate puzzle that consists of discovering, entangling and connecting over 5 billion base pairs.

Hendrik Poinar: Bring back the woolly mammoth! So, why do we, humans, have such a fascination with woolly mammoths? “Woollys are a quintessential image of the Ice Age … We seem to have a deep connection with them as we do with elephants,” says Poinar in this sci-fi worthy talk. It may be even more of a possibility now, thanks to a new development. Contrary to common belief, the woolly mammoth was hardly mammoth in size. Fossil of 16myo 'walking' bat discovered in New Zealand. Fossilised remains of a new bat species, which lived 16 million years ago, walked on four limbs and was three times larger than today's average bat, have been discovered in New Zealand. 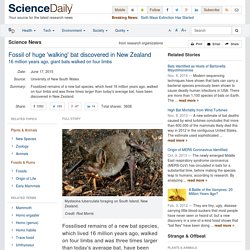 The fossils were found near Central Otago on South Island, in sediment left over from a vast prehistoric body of water known as Lake Manuherikia, which was part of warmer subtropical rainforest during the early Miocene era, between 16 and 19-million-years-ago. The new species, Mystacina miocenalis, was described today in the journal PLOS ONE, and is related to another bat, Mystacina tuberculata, which still lives in New Zealand's old growth forests. "Our discovery shows for the first time that Mystacina bats have been present in New Zealand for upwards of 16 million years, residing in habitats with very similar plant life and food sources," says lead author and vertebrate palaeontologist, Associate Professor Suzanne Hand from the University of New South Wales (UNSW) in Australia.