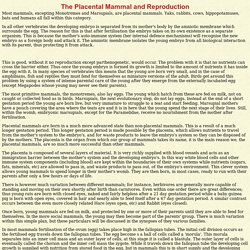 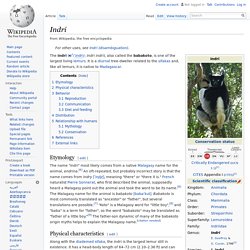 It is a diurnal tree-dweller related to the sifakas and, like all lemurs, it is native to Madagascar. Etymology[edit] A Speke's Gazelle uses its inflatable nose to make loud honking noises. Lemur Selfie. (2019) Giraffe in rare snow storm in South Africa. Coatimundis. World's Weirdest - Pangolin. Sunda Colugo. Cute baby Benjamin the orphan pygmy goat at Pot House Hamlet in Yorkshire. New Carnivore Discovered. A fuzzy fog-dweller with a face like a teddy bear is the first carnivore found in the Western Hemisphere in more than three decades, a new study says.

The 2-pound (0.9-kilogram) creature, called an olinguito, didn't make itself easy to find. The orange-brown mammal lives out a solitary existence in the dense, hard-to-study cloud forests of Colombia and Ecuador, which inspired part of its Latin name Bassaricyon neblina: Neblina is Spanish for "fog. " What's more, the large-eyed critter—now the smallest known member of the raccoon family—is active only at night, when it hunts for fruit in its Andean habitat.

Like other carnivores such as the giant panda, olinguitos seem to eat mostly plants, but are nevertheless part of the taxonomic order Carnivora. (Also see "Pictures: 14 Rarest and Weirdest Mammal Species Named. ") "The age of discovery is not over," said study leader Kristofer Helgen, curator of mammals at the Smithsonian's National Museum of Natural History.

Okapi Mother & Calf. Solenodon. Genus of mammals The Hispaniolan solenodon covers a wide range of habitats on the island of Hispaniola from lowland dry forest to highland pine forest. 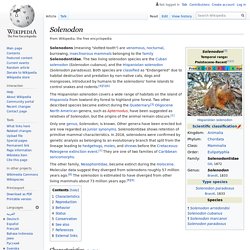 Two other described species became extinct during the Quaternary.[3] Oligocene North American genera, such as Apternodus, have been suggested as relatives of Solenodon, but the origins of the animal remain obscure.[1] Bongo Calf. Bizarre Horns of the Animal Kingdom. We at Weird Animal Question of the Week got a bit heady recently looking at photos of awesome animal headgear and took the author’s prerogative to ask, “What are some different types of horns?” 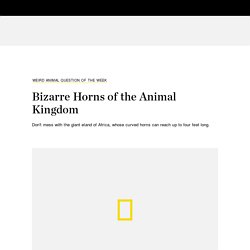 Horns evolved independently in many animals to meet similar needs—first as weapons, and then as defenses against rivals, says Don Moore, director of the Oregon Zoo in Portland. Horns likely initially inflicted body blows, but became larger and more elaborate as they absorbed blows to the head. This strategy led some animals, like pronghorns, to essentially wrestle (watch a video), whereas others, like sheep, ram their opponents. Horns can also communicate power—big ones, for instance, may identify a herd's dominant male so that newcomers can avoid fighting him and risking injury, Moore says. Dangerous Curves Species with horned females are usually large and live in open areas, making it difficult to camouflage themselves and likely driving the evolution of their weaponry. Clean-up Crew. Cows go on Grass for the 1st time this year.

Zebras on the Move. Suspended in a low-flying helicopter above the floodplains of Namibia’s Chobe River, a team of researchers scans a sea of black and white stripes. 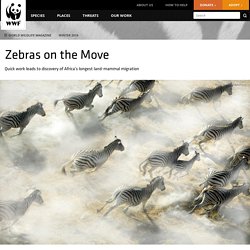 Saola Caught in Asia. 16 September 2010Last updated at 14:59 By Katia Moskvitch Science reporter, BBC News There may only be a few dozen of Saola left in the wild An extremely rare animal known as the "Asian unicorn" - in spite of having two horns - has been caught by villagers in Laos. 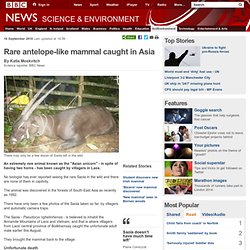 No biologist has ever reported seeing the rare Saola in the wild and there are none of them in captivity. The animal was discovered in the forests of South-East Asia as recently as 1992. There have only been a few photos of the Saola taken so far, by villagers and automatic camera traps. Adorable baby meerkats explore the African wild for the first time. Saiga Antelope. Australian western pygmy possum. Baby Bongo with stick. Random photo Submit your photo Stumble Thru animal photography Tags: antelope baby animal baby antelope playing with stick. 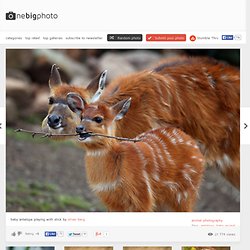 Foosa. CRACKED: The 5 Coolest Pets Humanity Has Bred into Existence. Scientists love themselves some genetic engineering. 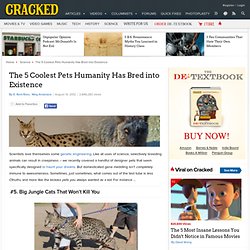 Like all uses of science, selectively breeding animals can result in creepiness -- we recently covered a handful of designer pets that seem specifically designed to haunt your dreams. But domesticated gene meddling isn't completely immune to awesomeness. Baby Meerkat. 6 Terrifying Platypus Facts. A humorous list detailing some of the strange qualities posessed by the platypus. 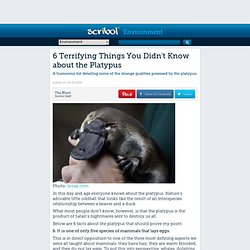 Photo: break.com In this day and age everyone knows about the platypus. Nature’s adorable little oddball that looks like the result of an interspecies relationship between a beaver and a duck. What most people don’t know, however, is that the platypus is the product of Satan’s nightmares sent to destroy us all. African Mammals. Helpful Hippo rescues Helpless Animals. Crocodile meets his match with hungry hippos. Female Kangaroos have three vaginas. We interrupt your regularly scheduled news programming to bring you this wonderful piece of trivia about kangaroo genitals. 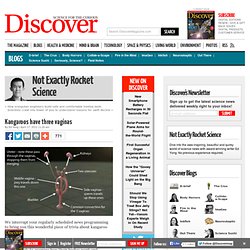 Regular readers will know of my love for Inside Nature’s Giants, the British documentary where anatomists cut up large animals to examine how their bodies work and evolved. It’s a truly incredible show, combining unbridled joy at the natural world, drama, and solid educational value.