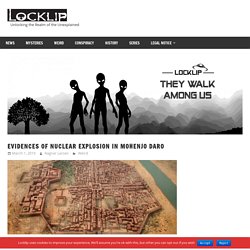 Mound of the Dead, Sindhi: موئن جو دڙو, pronounced), situated in the province of Sindh, Pakistan, was one of the largest settlements of the ancient Indus Valley Civilization. Mohenjo Daro was built around 2600 BC and and continued to exist till about 1800 BC. The ruins of the city were discovered in 1922 by Rakhaldas Bandyopadhyay, an officer of the Archaeological Survey of India. He was led to the mound by a Buddhist monk, who believed it to be a stupa. In the 1930s, massive excavations were conducted under the leadership of John Marshall, K. When excavations of Harappa and Mohenjo-Daro reached the street level, they discovered skeletons scattered about the cities, many holding hands and sprawling in the streets as if some instant, horrible doom had taken place.

At one site, Soviet scholars found a skeleton which had a radioactive level 50 times greater than normal. The David Davenport Angle to Mohenjo Daro Extinction [Quotes adapted directly from his works] Mini Ice Age wiped cvilisation 13,000 years ago. Maverick archaeologist Graham Hancock insists that a highly evolved human civilisation was wiped out by a global catastrophe around 13,000 years ago Suppose all the wildest theories and historical conspiracies of novelist Dan Brown were proven true. 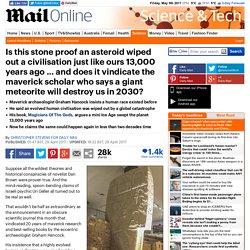 And the mind-reading, spoon-bending claims of Israeli psychic Uri Geller all turned out to be real as well. That wouldn’t be half as extraordinary as the announcement in an obscure scientific journal this month that vindicated 20 years of maverick research and best-selling books by the eccentric archaeologist Graham Hancock. His insistence that a highly evolved human civilisation was wiped out by a global catastrophe, remembered now only in myths and Biblical accounts such as the story of Noah and The Flood, has been mocked and dismissed by mainstream experts since he first spoke out in the mid-Nineties. Twice as old as Stonehenge, its engineering was far more skilled. What hasn’t changed is the starting point for all these theories. Loaded: 0% Ancient stone carvings confirm how comet struck Earth in 10,950BC, sparking the rise of civilisations. 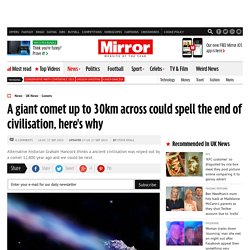 The cosmic rocks are hidden in an asteroid belt which the Earth passes through twice a year and in the next 20 years the Earth is at a higher than normal risk of being hit. It's not the first time it would have happened and 12,800 years ago a forgotten sophisticated civilisation was almost wiped out by a similar strike . Here he explains his theory What are we going to be hit by? First I need to fill you in on a bit of background on comets which visit the solar system from a deeper part of space. There are countless comets out there circulating but occasionally they get perturbed from their trajectory and therefore potentially across the path of the earth. Getty So what arrives as one gigantic warhead breaks up into multiple targeted re-entry vehicles – like a shotgun blast which spreads out along the orbit of the comet.

That's the stream called? Watch Next. Now Harvard Scientists Say That There May Be An ANCIENT EARTH INSIDE Earth. February 11, 2015 - A team of Harvard scientists may have found an indication that a portion of an ancient Earth exists inside our planet’s mantle. 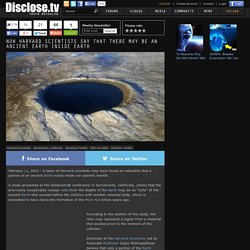 Five Apocalyptic Events the Human Race Managed to Survive. Joshua Krause, ContributorWaking Times Despite having the will and desire to survive horrific disasters, preppers are often accused of being pessimistic and cynical by their friends and family. 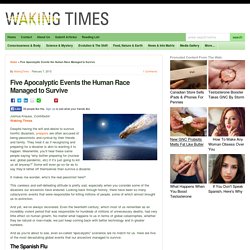 They treat it as if recognizing and preparing for a disaster is akin to wanting it to happen. Meanwhile, you’ll hear these same people saying “why bother preparing for (nuclear war, global pandemic, etc) if it’s just going to kill us all anyway?” Some will even go so far as to say they’d rather off themselves than survive a disaster. It makes me wonder, who’s the real pessimist here? This careless and self-defeating attitude is pretty sad, especially when you consider some of the disasters our ancestors have endured. And yet, we’ve always recovered. And as you’re about to see, even so-called “apocalyptic” scenarios are no match for us. The Spanish Flu It’s widely believed that World War One was itself responsible for one of the most devastating viruses in recorded history.