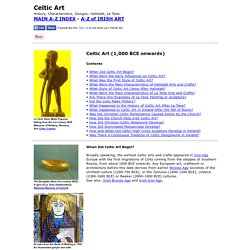 Hallstatt art from Central Europe is noted for its high quality iron tools and weaponry, along with its bronze-based manufacture of decorative items and ornamentation. But relatively few silver or Gold objects have been found from this era. Hallstatt was influenced by the militaristic Mycenean art and culture c.1650-1200 BCE which the Celts absorbed as they passed through the Black Sea area. The type-site in Austria, fully excavated by archeologists in the 19th century, included more than 2,000 graves packed with an assortment of functional and ornamental items. These and other Hallstatt-era hoards contained a mass of weaponry like axes, javelins, spears, cutting swords, daggers, helmets, bosses, shield plates. Although it evolved and was influenced in several ways during its 300-year lifespan, the Hallstatt art style is typically very geometric. What Style of Celtic Art Came After Hallstatt? Celtic Culture: Characteristics of Visual Art, Language, Religion.

Gaelic. BBC Wales - Education - Iron Age Celts. Celtshistory. [Top] The Celts (pronounced with a hard C like "Claymore") appear in Europe as a group of peoples who spoke languages in the Celtic branch of the Indo-European family of languages. 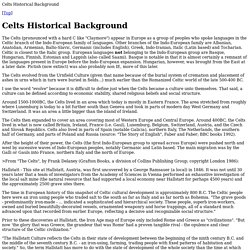 Other branches of the Indo-European family are Albanian, Anatolian, Armenian, Balto-Slavic, Germanic (includes English), Greek, Indo-Iranian, Italic (Latin based) and Tocharian. Celtic is closest to the Italic group. European languages not belonging to the Indo-European group are Basque, Hungarian, Finnish, Estonian and Lappish (also called Saami). Basque is notable in that it is almost certainly a remnant of the languages present in Europe before the Indo-European expansion. The Religion of the Ancient Celts Index.

Sacred Texts Legends and Sagas Celtic Contents Start Reading This book, which appears for the first time on the Internet at sacred-texts.com, is one of the best scholarly treatments of the ancient Celtic religion. 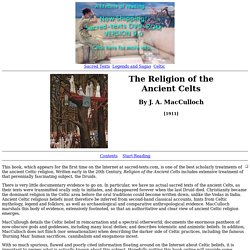 Written early in the 20th Century, Religion of the Ancient Celts includes extensive treatment of that perennially fascinating subject, the Druids. There is very little documentary evidence to go on. In particular, we have no actual sacred texts of the ancient Celts, as their texts were transmitted orally only to initiates, and disappeared forever when the last Druid died. MacCullough details the Celtic belief in reincarnation and a spectral otherworld; documents the enormous pantheon of now-obscure gods and goddesses, including many local deities; and describes totemistic and animistic beliefs.

With so much spurious, flawed and poorly cited information floating around on the Internet about Celtic beliefs, it is important to review what is actually known about this subject. Celtic Interlace Designs. The second view maintains that Celtic interlace originated in the Middle East as part of the artistic tradition of the Eastern Roman Empire in Byzantium (Constantinople, now Instanbul). 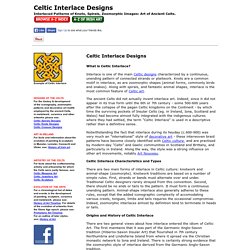 Byzantine artists had already begun to use interlace in the development of their preferred form of two-dimensional art - the latter being fully exploited in the icons, mosaics, calligraphy and illuminations of the later Eastern Orthodox Church. The proponents of this view cite Christian Coptic (Egyptian) and Syrian illuminated texts, produced during the 5th and 6th centuries, as the true precursors of Western Gospel manuscripts like the Book of Durrow. Copies of such Middle Eastern manuscripts were probably introduced to Ireland sometime between 630 and 690 by religious envoys or missionaries returning from Rome or Siena.

The case for a Levantine origin of Celtic interlace is strengthened by two stylistic arguments. In Search of Ancient Ireland . Technology. By Carmel McCaffrey and Leo Eaton ometime in the fifth millennium B.C., new technology arrived in Ireland, carried by immigrants from Europe or native Irish who had learned new skills overseas. 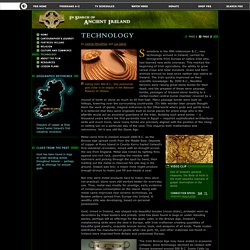 This marked the beginning of Irish agriculture, the ability to grow cereal crops and raise livestock. Grain and farm animals arrived by boat since neither was native to Ireland. The Irish quickly improved on their scientific knowledge: By 3500 B.C., Neolithic farmers were raising great stone tombs for their dead, and the greatest of these were passage tombs, passages of dressed stone leading to a corbel-roofed central burial chamber covered by a mound of earth or stone as much as 40 feet high. Many passage tombs were built on hilltops, towering over the surrounding countryside. Metal came first to Ireland around 2400 B.C. as the Bronze Age spread north from the Middle East.

Not only were metal products hard to make, they were not practical; stone axes still worked better for everyday use. Simon James's Ancient Celts page: introduction.