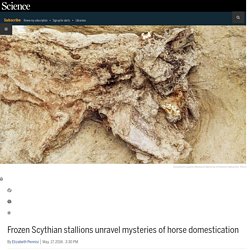 Thousands of years of inbreeding, for example, have littered horse genomes with detrimental DNA. And because modern stallions all share a similar Y chromosome, early equestrians must have studded their herds with just a few males. Or so researchers thought. Now, by sequencing the genomes of 11 frozen stallions buried 2300 years ago in a Scythian prince’s tomb in the permafrost of Kazakhstan (above), researchers have discovered that the first horses came from plentiful male stock. What’s more, detrimental DNA had not yet begun to accumulate by the time these Eurasian nomads harnessed horsepower to conquer neighboring peoples. Giraffe genes reveal they rely upon turbo-charged heart for distinctive body shape. It is a question that should have been answered by Rudyard Kipling, but now scientists have really solved the riddle of what is behind the giraffe's most iconic feature. 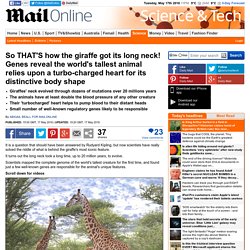 Conservationists hail 'extraordinary' discovery of African zebra herd migrating 300 miles to watering holes. The journey was made by about 2,000 zebra who travelled between Namibia and BotswanaIt encompasses a round trip journey of 500 kilometers (300 miles)Zebra migration reaches farther than any other documented in AfricaThe newfound migration is a rare bright spot at a time when mass movements of wildlife are disappearing By Travelmail Reporter Published: 09:37 GMT, 2 June 2014 | Updated: 10:24 GMT, 2 June 2014 At a time when mankind's encroachment on habitats is increasingly leading species to extinction, scientists have discovered a mass migration of animals in Africa that reaches farther than any other documented on the continent. 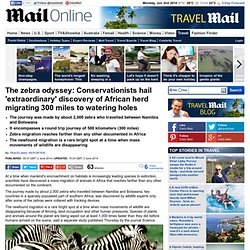 The journey made by about 2,000 zebra who travelled between Namibia and Botswana, two countries in a sparsely populated part of southern Africa, was discovered by wildlife experts only after some of the zebras were collared with tracking devices. 'This is the longest known land migration in Africa, in terms of distance between endpoints,' Naidoo said. Polar bear evolved to survive being a heart attack waiting to happen. If you ask what separates two species, a lot of people would tell you that an inability to produce fertile offspring is the key test. 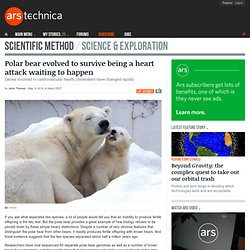 But the polar bear provides a great example of how biology refuses to be pinned down by these simple binary distinctions. Despite a number of very obvious features that distinguish the polar bear from other bears, it readily produces fertile offspring with brown bears. And fossil evidence suggests that the two species separated about half a million years ago. Are these the cutest furry animals in the world? Flying squirrels of Siberia pop out to say hello. Siberian or Russian flying squirrels pictured on Japanese island HokkaidoPictures of them playing are unusual as they are shy animals and nocturnal By Suzannah Hills Published: 17:13 GMT, 18 February 2013 | Updated: 11:12 GMT, 19 February 2013 If a prize is being handed out for the world's cutest creature, the Siberian flying squirrel is certainly in with a chance of winning. 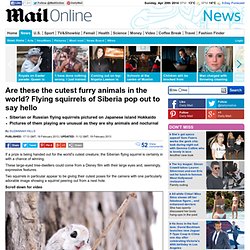 These large-eyed tree-dwellers could come from a Disney film with their large eyes and, seemingly, expressive features. Two squirrels in particular appear to be giving their cutest poses for the camera with one particularly adorable image showing a squirrel peering out from a nest hole. No esc-ape from the law: Chimpanzees have policemen, too. By Ted Thornhill Updated: 12:42 GMT, 8 March 2012 If you thought ‘law of the jungle’ was just an expression, think again. 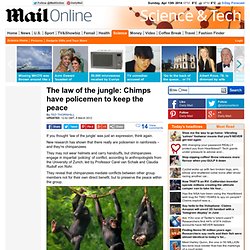 New research has shown that there really are policemen in rainforests – and they’re chimpanzees. They may not wear helmets and carry handcuffs, but chimpanzees engage in impartial ‘policing’ of conflict, according to anthropologists from the University of Zurich, led by Professor Carel van Schaik and Claudia Rudolf von Rohr. They reveal that chimpanzees mediate conflicts between other group members not for their own direct benefit, but to preserve the peace within the group. 'Ello, 'ello, 'ello: Chimpanzees deploy policemen to keep the peace, according to a new study The authors suggest that this behaviour can be regarded as an early evolutionary form of morality. Until now, this morally motivated behaviour in chimpanzees was only ever documented anecdotally. This policing activity was rare and generally limited to high-ranking individuals.