This is a collection of resources related to investigating the ancient past and also the related research assignments.

Inca Mummies. The Inca civilization of Peru, as with many other ancient Andean cultures, mummified many of their dead and buried them with valuable materials such as precious metal jewellery, fine pottery, and sumptuous textiles. 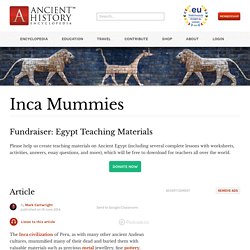 Important mummies could also be periodically removed from their tombs to participate in ceremonies where they were also offered food as if they were still living persons. Those mummies (mallki) which escaped looters have, in most cases, been excellently preserved, thanks to the dry climate of the Andes region, and they provide a unique insight into the culture, religious practices, and everyday life of the Incas. Ancestor Worship Mummification was only one type of burial employed by the Incas and was an ancient Andean manifestation of ancestor worship which illustrates a deep reverence for older generations (ayllu) and kinship within communities. 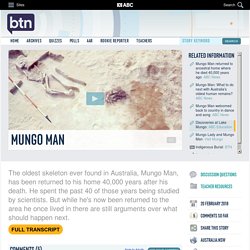 He spent the past 40 of those years being studied by scientists. But while he's now been returned to the area he once lived in there are still arguments over what should happen next. 42 thousand years. That's more than 15 million sunrises. It's an amount of time pretty much impossible to imagine, and that's how long-ago Mungo Man lived. MARY PAPPIN: Mungo Man showed Australia that Aboriginal people have been here for a very, very long time. Scientists were able to tell a lot about what Mungo man's life would've been like back then by studying his skeleton and the burial site. JIM BOWLER: It was a remarkable moment of realisation of just how modern the Earth’s earliest Australians really were.

To do all this research on Mungo Man, scientists took him away from where he was buried and kept him in a university lab. Cheddar Man's DNA shows the first Britons were black. London: The earliest Britons were black-skinned, with dark curly hair and possibly blue eyes, new analysis of a 10,000-year-old skeleton has revealed. 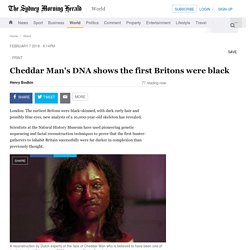 Scientists at the Natural History Museum have used pioneering genetic sequencing and facial reconstruction techniques to prove that the first hunter-gatherers to inhabit Britain successfully were far darker in complexion than previously thought. Juanita the Ice Maiden: Featured Mummies Around the World @ Mummy Tombs by James M Deem. Inca Ice Maiden Note: I am indebted to Johan Reinhard, anthropologist and author for his guidance in revising this page. 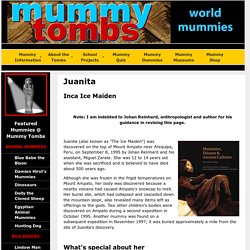 Juanita (also known as "The Ice Maiden") was discovered on the top of Mount Ampato near Arequipa, Peru, on September 8, 1995 by Johan Reinhard and his assistant, Miguel Zarate. She was 12 to 14 years old when she was sacrificed and is believed to have died about 500 years ago. Hatshepsut. Short Biography, Information & Facts about Queen Hatshepsut, the famous pharaoh and queen of Egypt Biography, Facts and information about the life of a PharaohThe term pharaoh was the title of an ancient Egyptian king who was considered to be a living god and worshipped as a deity. 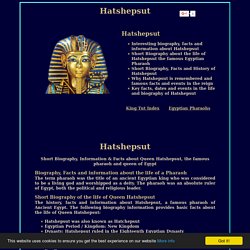 'How I found Queen Hatshepsut' As the only female pharaoh from Egypt's golden age, was the first king to build a tomb in the Valley of the Kings and her mortuary temple at Deir el Bahri is a masterpiece of ancient Egyptian architecture, known as Djeser-Djeseru, "Wonder of Wonders. 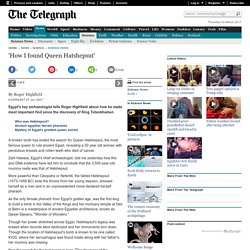 " Though her power stretched across Egypt, Hatshepsut's legacy was erased when records were destroyed and her monuments torn down. Though the location of Hatshepsut's tomb is known to be one called KV20, where her sarcophagus was found inside along with her father's, her mummy was missing. Now the search for the lost queen is over. "The discovery of the Hatshepsut mummy is one of the most important finds in the history of Egypt," said Dr Hawass. "Our hope is that this mummy will help shed light on this mystery and on the mysterious nature of her death.

" "She had problems with her teeth and diabetes and died at the age of 50 because of cancer," Dr Hawass told me. Tooth solves Hatshepsut mummy mystery. Archaeologists today used a missing tooth to positively identify the mummy of Hatshepsut, Egypt's greatest woman pharaoh who reigned more than 3,000 years ago. 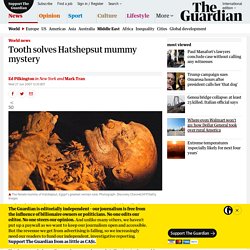 Zahi Hawass, Egypt's foremost archaeologist who led the research, said: "This is the most important discovery in the Valley of the Kings since the discovery of King Tutankhamun, and one of the greatest adventures of my life. " Siberian Ice Maiden. Ice Mummies: Siberian Ice Maiden. PBS Airdate: November 24, 1998Go to the companion Web site NARRATOR: Tonight on NOVA, sacrificial horses guard her tomb. 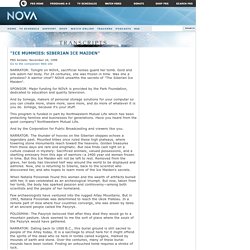 Gold and silk adorn her body. For 24 centuries, she was frozen in time. Was she a priestess? A warrior chief? SPONSOR: Major funding for NOVA is provided by the Park Foundation, dedicated to education and quality television. Tollundmanden, Museum Silkeborg - Welcome to the story about Tollund Man. Tollund Man: Bog Bodies @ Mummy Tombs. Background information. 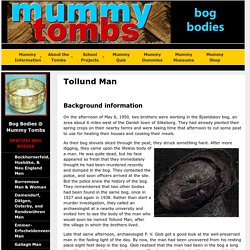 The Tollund Man - A Face from Prehistoric Denmark. Entombed in Style: Lady Dai. The lavish afterlife of a Chinese noblewoman Dig deep holes, store grain, do not seek hegemony. 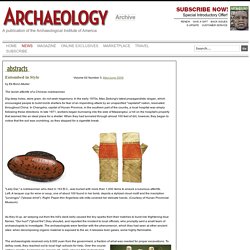 In the early 1970s, Mao Zedong's latest propagandistic slogan, which encouraged people to build bomb shelters for fear of an impending attack by an unspecified "capitalist" nation, resonated throughout China. In Changsha, capital of Hunan Province, in the southern part of the country, a local hospital was simply following these directions. In late 1971, workers began burrowing into the side of Mawangdui, a hill on the hospital's property that seemed like an ideal place for a shelter. When they had tunneled through almost 100 feet of dirt, however, they began to notice that the soil was crumbling, so they stopped for a cigarette break.

He is the best-preserved prehistoric man ever discovered with his own equipment and clothing. Most ancient human remains are found in burial chambers with carefully selected objected rather than what they use in everyday life. Ötzi the Iceman, Museum of Archaeology Bolzano. What was Otzi the Iceman wearing when he died? Pretty much an entire zoo.

He had great style. (South Tyrol Museum of Archaeology/A. Ochsenreiter) Otzi, who are you wearing? When Otzi the Iceman was discovered in 1991, his 5,300-year-old body had been remarkably well preserved by his glacial tomb. And while they weren't exactly runway ready, his clothes held up pretty nicely as well. [New study on Otzi the Iceman reveals humanity’s intimate affair with one microbe] DNA sequencing has come a long way since then, and now we've finally gotten a peek into Copper Age wardrobe choices. Ötzi - South Tyrol Museum of Archaeology. Lindow Man. Mid-1st century AD, Cheshire, England The body of this man was discovered in August 1984 when workmen were cutting peat at Lindow Moss bog in north west England.

It was carefully transported to the British Museum and thoroughly examined by a team of scientists. Their research has allowed us to learn more about this person – his health, his appearance and how he might have died – than any other prehistoric person found in Britain. The conditions in the peat bog meant that the man’s skin, hair and many of his internal organs are well preserved.

Radiocarbon dating shows that he died between 2 BC and AD 119. The man met a horrific death.