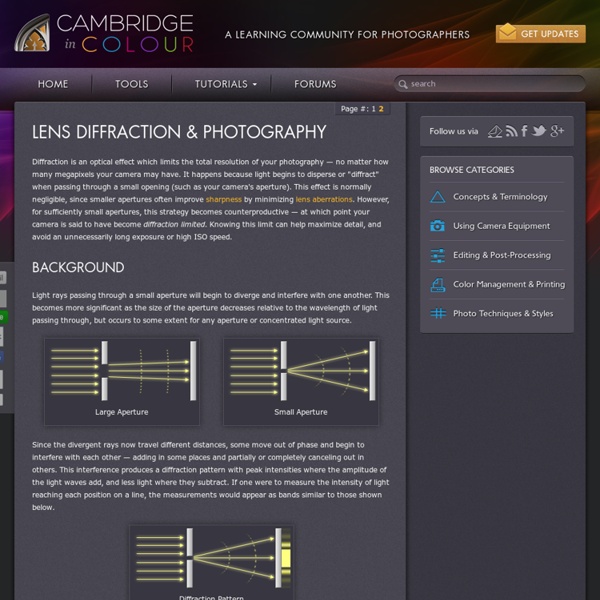 Diffraction is an optical effect which limits the total resolution of your photography — no matter how many megapixels your camera may have. It happens because light begins to disperse or "diffract" when passing through a small opening (such as your camera's aperture). This effect is normally negligible, since smaller apertures often improve sharpness by minimizing lens aberrations. However, for sufficiently small apertures, this strategy becomes counterproductive — at which point your camera is said to have become diffraction limited. Knowing this limit can help maximize detail, and avoid an unnecessarily long exposure or high ISO speed. Light rays passing through a small aperture will begin to diverge and interfere with one another. Large Aperture Small Aperture Since the divergent rays now travel different distances, some move out of phase and begin to interfere with each other — adding in some places and partially or completely canceling out in others. Diffraction Pattern Airy Disk Related:  Camera Optics Theory

Photon Nomenclature[edit] In 1900, Max Planck was working on black-body radiation and suggested that the energy in electromagnetic waves could only be released in "packets" of energy. In his 1901 article [4] in Annalen der Physik he called these packets "energy elements". Physical properties[edit] The cone shows possible values of wave 4-vector of a photon. A photon is massless,[Note 2] has no electric charge,[13] and is stable. Photons are emitted in many natural processes. The energy and momentum of a photon depend only on its frequency (ν) or inversely, its wavelength (λ): where k is the wave vector (where the wave number k = |k| = 2π/λ), ω = 2πν is the angular frequency, and ħ = h/2π is the reduced Planck constant.[17] Since p points in the direction of the photon's propagation, the magnitude of the momentum is The classical formulae for the energy and momentum of electromagnetic radiation can be re-expressed in terms of photon events. Experimental checks on photon mass[edit]

Lens Genealogy LENS GENEALOGY Part 1by Roger Cicala Where do new lens designs come from?I knew that today’s lenses are all designed using computer programs, but I was surprised to find new lenses aren’t designed from scratch. So camera lenses, like Darwin’s finches, obey a very strict “survival of the fittest” law. Even knowing this, when I wrote a series of articles on the development of camera lenses, I was amazed to find that virtually every camera lens in use today can trace its heritage back to one of five lenses, four of which were developed by 1900. Does the pedigree of a lens matter? Knowing the ancestry of a lens can be interesting from a historical standpoint. Early Lenses DesignsThe first lenses were rather simple things. A mensicus lens (left) and an achromatic doublet After the invention of the Daguerrotype camera lens design improved rapidly and literally hundreds of photographic lenses had been marketed by the early 1900s. The Lens Family Tree The Petzval Portrait lens Advantages: Duh!

DSLR Magnification By: Nick Rains We live in ‘interesting times’. Not since colour film was introduced has so much controversy raged about photography. The Internet has allowed vast global discussions to ebb and flow like never before and whilst this is great in some respects, the downside is that there is a whole lot of misinformation floating around. Problem: How to sift the simple facts and truths from the myths and rumours? Answer: With a basic knowledge of certain aspects of photography, especially basic lens theory. Rainbow Lorikeet Canon D60 with Canon 300/2.8L IS lens and 2x Extender (960mm Equivalent Focal Length). The ‘Focal Length Multiplier’ is one of the most easily misunderstood characteristics of the some of the new breeds of DSLR and so I would like to offer a brief look at this aspect of digital imaging and attempt to lay to rest some of the myths. OK, firstly, when you put a 300mm lens on a D60 you do NOT get a 480mm lens – it is still a 300mm lens. Here is the rub. All is not gloomy though.

Depth of field and your digital camera What is depth of field? A photographic lens renders a sharp image of points at one given distance, measured along the lens axis. This distance can be adjusted (the process of focusing). Any points at a different distance will be rendered more or less unsharp, and this unsharpness increases gradually as we move away from the "sharp" focus plane. We are talking here only about the unsharpness due to the subject being out of the focused distance. The term depth of field (DOF) is often used to refer to the fact that points not exactly in focus are rendered acceptably sharp in the image. Is it good or bad for your pictures? For many types of photography we would like to have everything in the frame as sharp as possible. In some cases, however, we may want to use a more creative approach, with the main subject of the picture being sharp, while the background (and, if applicable, the foreground) is fuzzy, out of focus. What is "acceptably sharp" — circle of confusion Basic facts The M×A Rule

Lens speed A fast prime (fixed focal length) lens, the Canon 50mm f/1.4 (left), and a slower zoom lens, the Canon 18–55mm f/3.5–5.6 (right); this lens is faster at 18mm than it is at 55mm. Lens speed refers to the maximum aperture diameter, or minimum f-number, of a photographic lens. A lens with a larger maximum aperture (that is, a smaller minimum f-number) is called a "fast lens" because it delivers more light intensity (illuminance) to the focal plane, achieving the same exposure with a faster shutter speed. A smaller maximum aperture (larger minimum f-number) is "slow" because it delivers less light intensity and requires a slower shutter speed. A lens may be referred to as "fast" or "slow" depending on its maximum aperture compared to other lenses of similar focal length designed for a similar film format. Lens speed is important in taking pictures in dim light, or with long telephoto lenses. With 35 mm cameras, the fastest lenses are typically in the "normal lens" range near 50 mm.

F-number Diagram of decreasing apertures, that is, increasing f-numbers, in one-stop increments; each aperture has half the light gathering area of the previous one. In optics, the f-number (sometimes called focal ratio, f-ratio, f-stop, or relative aperture[1]) of an optical system is the ratio of the lens's focal length to the diameter of the entrance pupil.[2] It is a dimensionless number that is a quantitative measure of lens speed, and an important concept in photography. Notation[edit] The f-number N is given by where is the focal length, and is the diameter of the entrance pupil (effective aperture). A 100 mm focal length f/4 lens has an entrance pupil diameter of 25 mm. A T-stop is an f-number adjusted to account for light transmission efficiency. Stops, f-stop conventions, and exposure[edit] A Canon 7 mounted with a 50 mm lens capable of an exceptional f/0.95 A 35 mm lens set to f/11, as indicated by the white dot above the f-stop scale on the aperture ring. f/1 = , f/1.4 = , f/2 = , f/2.8 = (i.e .