Renewable and Green Energy come with environmental costs. There are also issues of intermittency, lack of inertia, cost/benefit analysis, issues with battery storage and environmental foot prints that need to be understood when contemplating a fossil-fuel-free future.

Because most installations receive subsidies, there are also concerns about elevated costs and conflicts of interest with those who benefit at the cost of others.

Solar Power. Tidal Power. Biomass and Biofuels. Energy Storage. Renewables and grid reliability. More renewables? Watch out for the Duck Curve. Myths and realities of renewable energy. By Planning Engineer Power System Planners do not have the expertise or knowledge to say whether or not the benefits of reducing carbon emissions are worth the costs. 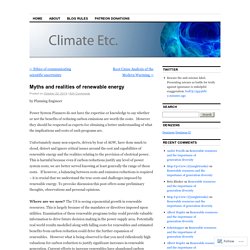 However they should be respected as experts for obtaining a better understanding of what the implications and costs of such programs are. Claim: Putting a price tag on the 2°C climate target no more expensive than fossil fuels. Addressing climate change will require substantial new investment in low-carbon energy and energy efficiency – but no more than what is currently spent on today’s fossil-dominated energy system, according to new research from IIASA and partners. 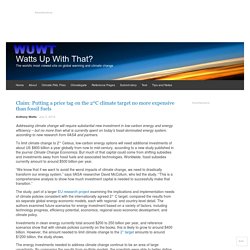 To limit climate change to 2° Celsius, low-carbon energy options will need additional investments of about US $800 billion a year globally from now to mid-century, according to a new study published in the journal Climate Change Economics. But much of that capital could come from shifting subsidies and investments away from fossil fuels and associated technologies. Worldwide, fossil subsidies currently amount to around $500 billion per year.

“We know that if we want to avoid the worst impacts of climate change, we need to drastically transform our energy system,” says IIASA researcher David McCollum, who led the study. “This is a comprehensive analysis to show how much investment capital is needed to successfully make that transition.” The Price Tag Of Renewables, Part 2. Guest Post by Willis Eschenbach Anthony has posted a story about a laughable analysis of the cost of propping up renewables through subsidies. 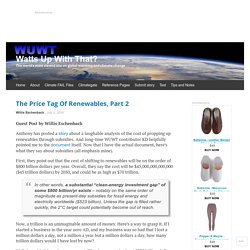 And long-time WUWT contributor KD helpfully pointed me to the document itself. Now that I have the actual document, here’s what they say about subsidies (all emphasis mine). First, they point out that the cost of shifting to renewables will be on the order of $800 billion dollars per year. Overall, they say the cost will be $45,000,000,000,000 ($45 trillion dollars) by 2050, and could be as high as $70 trillion. Renewable Energy, what is the cost? By Andy May A key question to think about, do renewable fuels decrease fossil fuel use, or do they increase it? 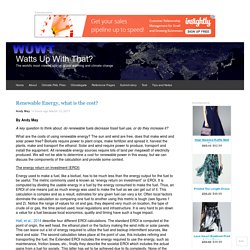 What are the costs of using renewable energy? The sun and wind are free, does that make wind and solar power free? Biofuels require power to plant crops, make fertilizer and spread it, harvest the plants, make and transport the ethanol. Finally, Some Critical Thinking On The Subject Of The Feasibility Of Renewables — Manhattan Contrarian. If you are interested in the question of whether it makes sense to try to eliminate fossil fuels from the electricity production system, you are undoubtedly frustrated, as I am, by the astounding absence of critical thinking coming from almost everybody who writes about this subject. 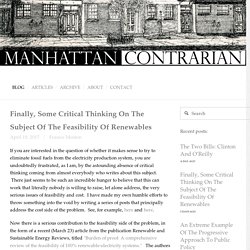 There just seems to be such an incredible hunger to believe that this can work that literally nobody is willing to raise, let alone address, the very serious issues of feasibility and cost. The Fuzzy Math Of Renewable Energy — Manhattan Contrarian. So, how to get from here to an 80% cut in CO2 emissions? 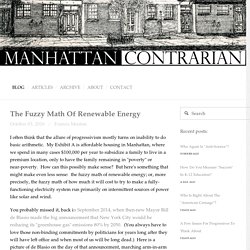 The big idea, if you want to call it that, is to use lots more solar and wind power. But those things only work part-time, and not on demand; so to turn them into a fully-functioning electricity system you need some combination of back-up power from dispatchable sources, and/or storage. And if it's only the back-up from dispatchable sources, without the storage, then you're probably going to find the dispatchable sources supplying most of the power most of the time. The Fuzzy Math Of Renewable Energy. In the progressive project to remake humanity and civilization, nothing counts but good intentions, and the details will all be worked out by the experts, using the infinite credit card. 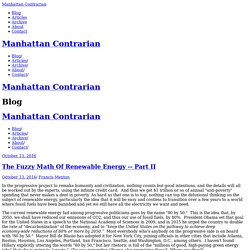 And thus we get $1 trillion or so of annual "anti-poverty" spending that never makes a dent in poverty. As hard as that one is to top, nothing can top the delusional thinking on the subject of renewable energy, particularly the idea that it will be easy and costless to transition over a few years to a world where fossil fuels have been banished and yet we still have all the electricity we want and need.

The current renewable energy fad among progressive politicians goes by the name "80 by 50. " This is the idea that, by 2050, we shall have reduced our emissions of CO2, and thus our use of fossil fuels, by 80%. Shocker: Top Google Engineers Say Renewable Energy ‘Simply won’t work’ Guest essay by Eric Worrall A research effort by Google corporation to make renewable energy viable has been a complete failure, according to the scientists who led the programme. 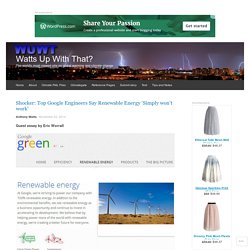 After 4 years of effort, their conclusion is that renewable energy “simply won’t work”. According to an interview with the engineers, published in IEEE; The Environmentalist Left's New Agenda. Following the Republican sweep in last year’s election, the Environmentalist Left is now experiencing a total meltdown. 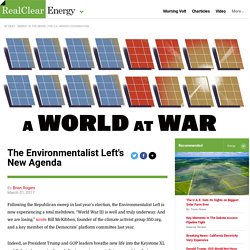 “World War III is well and truly underway. And we are losing,” wrote Bill McKibben, founder of the climate activist group 350.org, and a key member of the Democrats’ platform committee last year. Indeed, as President Trump and GOP leaders breathe new life into the Keystone XL and Dakota Access pipelines, left-wing environmentalists are pushing their anti-fossil fuel “Keep it in the Ground” movement even further out of the mainstream with a proposal, called “The Solutions Project.” 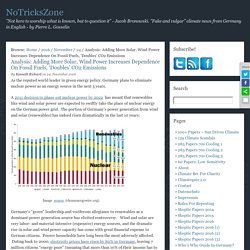 Bill Gates: “We need a [energy] miracle” Pellet of Plutonium 238 glowing red hot, under its own heat. Public domain image, source Wikimedia. Guest essay by Eric Worrall Bill Gates thinks we need a miracle to solve the world’s energy needs, a safe, reliable, non polluting form of energy which could bring electricity to the rural poor of Africa. The odd thing is, such a “miracle” is within our grasp; but nobody seems to be interested. From Bill Gates’ Annual Letter; The hidden agendas of sustainability illusions. Absurd, impractical sustainability precepts are actually a prescription for government control Guest essay by Paul Driessen As President Trump downgrades the relevance of Obama era climate change and anti-fossil fuel policies, many environmentalists are directing attention to “sustainable development.”

Like “dangerous manmade climate change,” sustainability reflects poor understanding of basic energy, economic, resource extraction and manufacturing principles – and a tendency to emphasize tautologies and theoretical models as an alternative to readily observable evidence in the Real World. It also involves well-intended but ill-informed people being led by ill-intended but well-informed activists who use the concept to gain greater government control over people’s lives, livelihoods and living standards. Why are “utility investors and renewable energy investors… like oil and water”? Guest post by David Middleton It was supposed to be an easy transition for NRG Energy (NYSE:NRG) from utility giant to renewable energy powerhouse. The company had billions in cash flow coming in from fossil fuel plants that could then be turned around and invested in wind, solar, electric charging stations, and energy storage.

Germany: 120 Billion Euros For 5% Electricity Supply! And “Huge New Green Movement” Against Wind Power. Only 5% of demand covered The Swiss online Baseler Zeitung here writes how the country’s Association for Pharmaceutical, Chemical and Biotech Companies is coming out against Switzerland’s recently proposed green “energy strategy”, saying that it is “fundamentally going in the wrong direction“. The association fears it will lead to higher costs. Levelised Costs Of UK Electricity Generation. Video: why renewables equal death. AEMO: Replacing Coal with Renewables will Cause Blackouts. Guest essay by Eric Worrall The Australian Energy Market Operator, the government body responsible for ensuring the stability of Australia’s energy supply, has issued a stark warning that closure of coal plants will dramatically increase the risk of widespread blackouts – that building additional renewable capacity will not compensate for the loss of coal capacity. This collective act of make-believe is devastating our environment and our budgets.

Mad Hatters’ Energy Subsidies Abuse. The recent G20 summit took on the appearance of the Mad Hatter’s tea party (Alice in Wonderland) when the G7 produced a statement saying they are committed to ending “fossil fuel subsidies.” UK government blew £168m on Cancelled Carbon Capture Projects. How fast can we burn millions of dollars trying to stuff a perfectly good fertilizer down a sinkhole? This fast… “O Canada!” What An Energy Buffoon You Have “On Guard For Thee” In Ontario …Wynne’s Debacle. The End Of Germany’s Energiewende? Fritz Vahrenholt: Germany Faces An Energy-Political Fiasco. If the loss of German competitiveness becomes clearly palpable, and the destruction of nature turns into a leading political issue, then voters and citizens could bring about a change in politics.