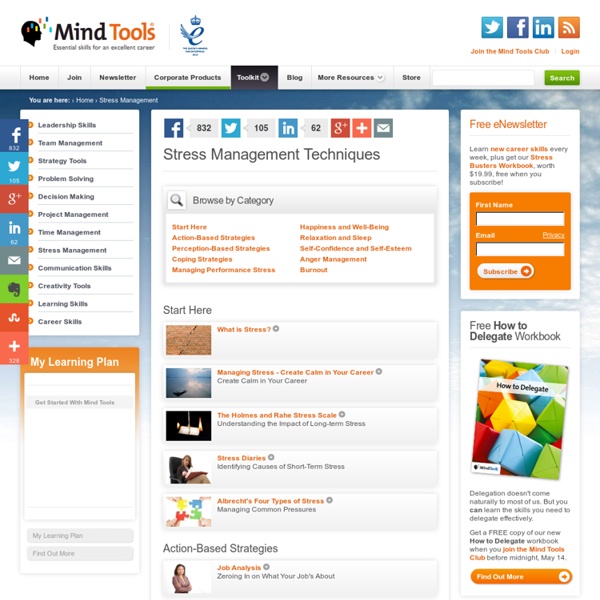 How to Stop Worrying Undoing the Worrying Habit Once acquired, the habit of worrying seems hard to stop. We're raised to worry and aren't considered "grown up" until we perfect the art. To the extent that worrying is learned/conditioned behaviour, it can be undone. Centuries-old cultural conditioning has given us a nasty neurosis: the belief that happiness must be "earned". Laid on top of the first neurosis is the idea that spending money will make you happy. So: we never stop working, we never stop spending money, we're never really happy – ideal conditions, coincidentally, for a certain type of slave economy. You won't stop worrying if you think it serves you. The fight-or-flight response (FOF) is useful on rare occasions of real danger. Worrying is never useful. Rearranging the mental furniture There's a useful gimmick to help stop worrying (we've already mentioned it briefly in How to Avoid Responsibilities, but it's worth looking at in detail). Accelerator-Brake analogy

Mind Tools - Management Training, Leadership Training and Career Training How office plants can fight stress and other workplace nasties Opinion Posted Humans have built high-rises since ancient Roman times, but it wasn't until the 20th century that they became the default work space for a significant slice of the world's workers. While these buildings are certainly efficient, they can cause real health issues. Office buildings, where many Australians spend much of their time, are even worse than apartment buildings. One excellent way to combat both sick days and stress is by filling your office with plants. Ideally, you want plants that will "scrub" the air of pathogens, improve the office's mix of bacteria, and survive in low light with little care. Fight formaldehyde (and other nasty chemicals) One of the many chemical compounds given off by synthetic office furnishings is formaldehyde, which can irritate the mucous membranes of the eyes, nose and throat, and also cause allergic contact dermatitis. Indoor plants will purify the air, reducing volatile organic compounds, including formaldehyde. Improve indoor bacteria balance

Learn how to make your own kombucha tea at home by Jonathan Benson, staff write (NaturalNews) Kombucha tea, a detoxifying, immune-boosting, probiotic “superfood” beverage that ancient Chinese cultures often referred to as the “immortal health elixir” has taken the Western world by storm today. And while health food stores and many supermarkets now carry bottled kombucha tea that can run as much as $4 a pop or more, it is actually quite easy to make your own kombucha tea at home for just pennies on the dollar. A simple combination of either black or green tea mixed with sugar, water, and a “mother” culture known as a “scoby” (Symbiotic Colony of Bacteria and Yeast), kombucha tea really could not be easier to make. Obtaining a kombucha starter culture To start, it is necessary to first obtain a healthy, organic starter culture, which is the active component in kombucha tea. Making kombucha tea from store-bought kombucha bottles * Pour separate 16-ounce bottle of kombucha tea into sanitized, quart-sized, 32-ounce mason jar. Sources: Picture

Eight in 10 Americans Afflicted by Stress Story Highlights Four in 10 U.S. adults (41%) say they lack the time to do all they wantA similar proportion (44%) frequently feel stressed WASHINGTON, D.C. -- About eight in 10 Americans say they frequently (44%) or sometimes (35%) encounter stress in their daily lives. Just 17% say they rarely feel stressed, while 4% say they never do. Although stress is common, just 41% of U.S. adults say, in answer to a different question, that they lack the time they need to do things they want. The majority, 59%, tend to think they do have enough time. Americans were asked about their stress and time pressures in a Dec. 4-11 Gallup poll. Fewer Americans today than from 2001 through 2007 say they lack sufficient time to get done what they want, although the 44% saying this in 2004 was statistically similar to today's 41%. Americans' current stress level is similar to what Gallup found in 2001, 2002 and 2007, as well as in an earlier measurement in 1994, when 40% felt frequent stress. Bottom Line

Breaking: New PRISM slide leaked by the Guardian: NSA has direct access to servers of Google, Facebook, Microsoft, Yahoo, Apple and others (NaturalNews) Breaking news -- this is one of the biggest stories of our lifetime -- it is critical for all internet users to read and understand this. The Guardian has just released a new slide today from its collection of 41 PRISM slides detailing the top secret NSA spy program that has, for years, granted the U.S. government "back door" access to the servers of Google, Yahoo, Microsoft, Apple, AOL, Facebook and others. The new slide, shown below, reveals that every one of these companies has been blatantly and viciously lying to its users over the last several days as they have denied the government has any sort of "direct access" to their servers. In a brilliant move of strategic journalism, the Guardian held on to this revealing PRISM slide until today, allowing all these tech companies to dig themselves into deep holes of denial regarding participation in the NSA spy program. That slide, originally published by the Guardian, is shown here: What kind of Americans? So now we know.

How to Release the Stress stored in our Bodies Do you spend much time sitting in front of a computer, on a plane, in a car? If so your hips may be locked up which effects your ability to dance, but worse than that it may be causing you undue stress and fear. The Psoas Muscle, is a long muscle located on the side of the lumbar region of the vertebral column and brim of the pelvis, that is also known as the “muscle of the soul”. It is one of the largest muscles in the body and it is a place where we often store stress or trauma that can literally influence our mood and our outlook on life. We recently explored in depth just how much fear can inhibit our ability to think clearly thus creating an unhealthy perspective that can harm us and those around us. Now let’s look at where that fear might be stored in our body, and a few ways to release it. In humans, the extremes of the two polarities might appropriately be described as LOVE (+) and FEAR (- ). How built up stress makes us easy to manipulate The effects of stress on the body

Training Toolkit - Evaluation - Forms and Questionnaires These resources are sample evaluation forms and guides to adapt for your own use. Course summary evaluations, focus group questions, and expert observation tools are included. There is a trainer’s competency checklist and trainer attributes competency self-assessment. Daily Evaluation Form File Type: Word Document Pages: 1 A sample form for collecting trainee feedback at the end of the day. *Software capable of displaying a PDF is required for viewing or printing this document.

Stress - The Body's Response Description An in-depth report on the causes, diagnosis, treatment, and prevention of stress. Highlights Nearly everyone experiences stress at some time. Stress produces changes in many body systems; examples include increased heart rate and blood pressure and altered immune function. Introduction Stress affects most people in some way. These stress responses could prove beneficial in a critical, life-or-death situation. Fortunately, research is showing that lifestyle changes and stress-reduction techniques can help people manage stress. External and Internal Stressors People can experience stress from external or internal factors. External stressors include adverse physical stimulus (such as pain or hot or cold temperatures) or stressful psychological environments (such as poor working conditions or abusive relationships).Internal stressors can also be physical (infections and other illnesses, inflammation) or psychological (such as intense worry about an event that may or may not occur).