Central NY Aquaponic Farm, a Business and Testing Ground for Future of Agriculture 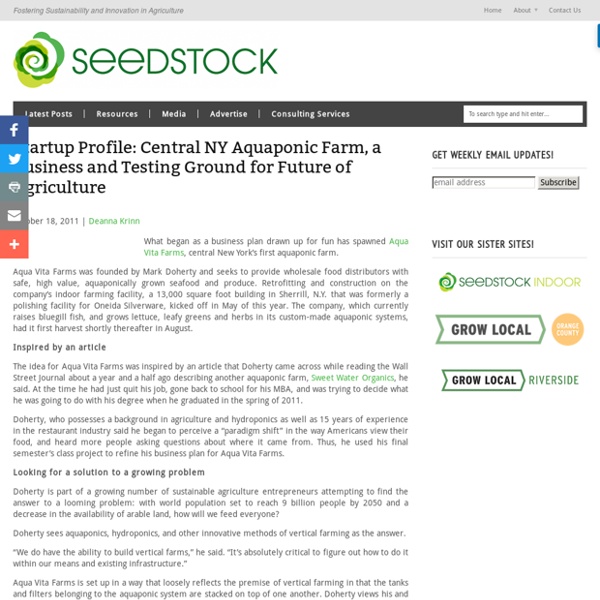 October 18, 2011 | Deanna Krinn What began as a business plan drawn up for fun has spawned Aqua Vita Farms, central New York’s first aquaponic farm. Aqua Vita Farms was founded by Mark Doherty and seeks to provide wholesale food distributors with safe, high value, aquaponically grown seafood and produce. Retrofitting and construction on the company’s indoor farming facility, a 13,000 square foot building in Sherrill, N.Y. that was formerly a polishing facility for Oneida Silverware, kicked off in May of this year. The company, which currently raises bluegill fish, and grows lettuce, leafy greens and herbs in its custom-made aquaponic systems, had it first harvest shortly thereafter in August. Inspired by an article The idea for Aqua Vita Farms was inspired by an article that Doherty came across while reading the Wall Street Journal about a year and a half ago describing another aquaponic farm, Sweet Water Organics, he said. Looking for a solution to a growing problem Inside Aqua Vita Farms Related:  Green Re-cycle.com

How to Run a Commercial Aquaponics System (Video) EcoFilms Australia/Video screen capture Since we first posted on the urban food revolution known as aquaponics, we've seen all kinds of systems for growing fish and vegetables in one, symbiotic relationship. A few, like the proposed Urban Aquaculture Center and Friendly Aquaponics' farm in Hawaii, have been commercial-scale operations. But most practitioners seem more focused on small-scale, backyard aquaponics than anything else. Nevertheless, there are those who are working to commercialize the idea. Talking to Gina Cavaliero from Green Acres Organics, aquaponics expert Murray Hallam explores just what it takes to create a viable aquaponics business. I'd love to hear from anyone else who is practicing commercial-scale aquaculture too.

"The Vertical Farm," the Movie by Sting Dr. Despommier on vertical farming. Photo by Kris Krug courtesy of Pop! Since 1989, Sting has been involved in protecting the Amazon through the Rainforest Foundation which he co-founded with his wife Trudie Styler and last month played a benefit concert for the organization. Despommier's upcoming book from Thomas Dunne Books coming to a farmscraper near you. As described in Treehugger over the last few years, the idea lays out a system of farming in which food is grown within tall city buildings as an efficient means of land use and way to get fresh food to local residents. Sting's film will document the first vertical farm to be constructed in a major U.S. city. Also, last Friday, Mayor Richard M. Vertical farming proposals as an agricultural solution for world hunger in the 21st century created in high-rises as a sustainable form of urban agriculture has been discussed over the last decade, so whether it's a salvo for all our agricultural and food problems, it seems the climb is on.

Optional Equipment and Growing Supplies - Nelson and Pade Aquaponics Clear Flow Aquaponic Systems® are complete system packages and include all of the components in the aquaponics loop: all tanks, filter tanks, tank stands, grow beds, plumbing, pumps, valves and the aeration system. There are additional items that some people need and others do not, depending on their climate, crop choices, infrastructure, etc. Those items are listed here, along with suggestions on growing supplies that you will use over time. Plant Grow cubes Each system comes with a starter pack of rockwool grow cubes.You can purchase extra cubes by the sheet or the box. 1” cubes = 200 cubes/sheet1.5” cubes = 98 cubes/sheet Our home food production systems use the 1.5” cubes.Our Commercial systems use the 1” cubes How many boxes do you need? Fish Food We offer AquaMax fish food, a high quality formulation for omnivores, which includes tilapia and bluegill. For commercial growers, you can buy larger quantities directly from a Purina dealer. Water Testing Equipment Seed Germination Media Beds

Digest: Vertical Farming Startups Seek Profit by Bringing Sustainable Agriculture to Cities August 12, 2011 | seedstock It’s Vertical Farming day over at Seedstock and we’re celebrating with a digest that features stories on a number of vertical urban agriculture startups that have the potential to play an outsize role in furthering the goals of sustainable agriculture. Enjoy your reads! Rooftop Farm Couples Science with Sustainability Finding fresh, high-quality produce in Montreal is a challenge. Growing a Million Heads of Lettuce on a Pin To grow one million heads of lettuce using conventional agriculture methods in the US requires either 16 acres of land in the Northern states, 8 acres of land in the Southern states, or .9 acres in a traditional hydroponic greenhouse operation. Home Town Organic Farm Goes Vertical in the City Dan Gibbs, CEO of San Diego, CA-based vertical organic farming startup Home Town Farms, doesn’t believe he’s introducing a new company, but an entire industry that will benefit consumers, the environment and the future of sustainable agriculture.

Aquaponics A small, portable aquaponics system. The term aquaponics is a blend of the terms aquaculture and hydroponic agriculture. Aquaponics (/ˈækwəˈpɒnɪks/) refers to any system that combines conventional aquaculture (raising aquatic animals such as snails, fish, crayfish or prawns in tanks) with hydroponics (cultivating plants in water) in a symbiotic environment. In normal aquaculture, excretions from the animals being raised can accumulate in the water, increasing toxicity. As existing hydroponic and aquaculture farming techniques form the basis for all aquaponic systems, the size, complexity, and types of foods grown in an aquaponic system can vary as much as any system found in either distinct farming discipline.[1] History[edit] Woodcut from the 13th century Chinese agricultural manual Wang Zhen's Book on Farming (王禎農書) showing rice grown in a floating raft planter system (架田, lit "framed paddy") in a pond Aquaponics has ancient roots, although there is some debate on its first occurrence:

untitled Hi RM! Flu Huh? Sorry to hear that man good to see you're back up. This is the thread yep, thought you'd like it. Hope you don't mind I took the liberty of getting recliner rocking chairs with seperate remotes cos Idon'tgrow ripped the springs and wire out of the old armchairs to try make Aqua scrog screens. What colour would you like the lounge painted? I didn't give that link to save that man from noob stoner e-mails. Hehe. Some of your favourite Aqua trivia and finds would be nice too. I'm hoping to make this thread a fun informative ride for visitors as well as ourselves. So we get to see piccy's of buds AND explore science and nature. I still love it as much if not more than when I first heard about it. I believe many growers will have information to contribute here as more on Aqua & bio & water & organics unfold. Hi Dan Kay. Wastes may or may not be removed from your system according to how it is designed. Lightbulbs went off! I'm zero waste must be coming up 6 months now.

Video from Seedstock's San Diego Sustainable Agriculture Entrepreneurship Event December 6, 2011 | Robert Puro Last week, Seedstock, in association with Rady Entrepreneur Club held a panel entitled, Sustainable Agriculture Entrepreneurship in Southern California at the Rady School of Management at UC San Diego. The sold out event featured seven entrepreneurs discussing their companies and their reasons for pursuing and developing sustainable agriculture ventures and technologies. From high tech indoor urban farms that utilize the latest vertical farming technology to grow food cleanly, efficiently and without chemicals to renewable energy technology that generates electricity from agricultural waste, the entrepreneurs on the panel embodied the promise and vision of a sustainable agriculture industry that is set to experience explosive growth. Seedstock, with the help of Rady School of Management, recorded the entire event on video. Seedstock founder, Jason Reed, welcomes the attendees:

Sated Magazine Vertical farms - Why waste land when you can grow food in skyscrapers? - I Look Forward To Soil-based agriculture is so passé. Nothing short of an agricultural revolution is underway, spurred on by visionary Dr. Dickson Despommier of Columbia University. His plan is to build 30-story greenhouses in cities around the world, which will allow us to produce more food, for less money, in a healthier way, while freeing up arable land for nature. Listen up environmentalists! If you’re serious about relieving mother earth of her burdens as food producer, you can forget about unsustainable and inefficient organic farming (which requires far more space than non-organic). By growing crops without the use of soil - hydroponically - “fields” can be stacked on top of each other in urban areas, to grow fruits, vegetables, grains, you name it. I his book, The Vertical Farm , Dr. 1. 2. 3. 4. 5. 6. 7. 8. 9. 10. 11. Imagine if all the world's farm land was no longer needed? You can read more about this inspiring idea in the The Vertical Farm: Feeding the World in the 21st Century

Midwestern geothermal greenhouse provides local citrus year round for $1 a day Greenhouse in the Snow, built by a former mailman, grows an abundance of local produce high on the Nebraska plains. "We can grow the best citrus in the world, right here on the high plains,” says Russ Finch, the former mailman (pictured above) who is the creative superstar genius responsible for building the Greenhouse in the Snow. And he can do it spending only $1 a day in energy costs. For Midwesterners (and many of the rest of us) produce in the winter means things imported form warmer climes or grown in greenhouses, which typically have a prodigious hunger for energy and are fed by burning fossil fuels. But by harnessing the Earth's natural internal heat to warm a greenhouse, oranges and other tropical treats thrive without the waste and pollution typically found in so much agriculture. As Grant Gerlock writes at NPR, the floor is dug 4 feet below the surface, the roof is slanted toward the south to harness as much sun as it can. Watch the charming Mr.