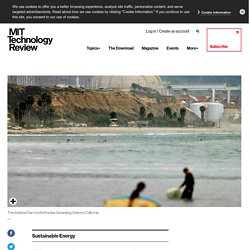 This comes as no surprise. The analysis from the International Energy Agency is in line with other preliminary reports from other organizations. But it raises an awkward question: if renewables are growing and the prices of solar, wind, and batteries are falling, why is the world’s climate pollution still going up? The first answer is the growing global economy, which pushed energy demand up by 2.3% last year, the IEA says. A contributing factor was that more energy was needed for extra heating and cooling in regions hit by unusually severe cold snaps and heatwaves. Sign up for The Download. View the high resolution version of today’s graphic by clicking here. 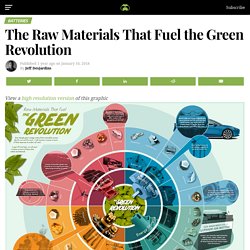 Records for renewable energy consumption were smashed around the world in 2017. Looking at national and state grids, progress has been extremely impressive. In Costa Rica, for example, renewable energy supplied five million people with all of their electricity needs for a stretch of 300 consecutive days. Meanwhile, the U.K. broke 13 green energy records in 2017 alone, and California’s largest grid operator announced it got 67.2% of its energy from renewables (excluding hydro) on May 13, 2017. 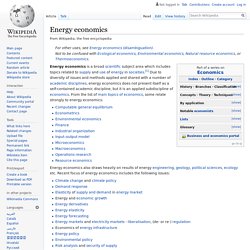 Energy transition. Photovoltaic array and wind turbines at the Schneebergerhof wind farm in the German state of Rheinland-Pfalz Parabolic trough power station for electricity production, near the town of Kramer Junction in California's San Joaquin Valley Protest at the Legislative Building in Olympia, Washington. 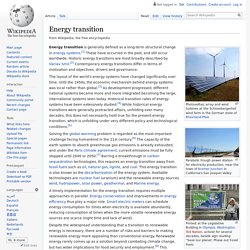 Ted Nation, activist for several decades, beside sign reading "Save our planet. Phase out Fossil Fuels Energy transition is generally defined as a long-term structural change in energy systems.[1] These have occurred in the past, and still occur worldwide. The layout of the world’s energy systems have changed significantly over time. A timely implementation for the energy transition requires multiple approaches in parallel. Sustainable energy. Sustainable energy is the sustainable provision of sustainable energy development that meets the needs of the present without compromising the ability of future generations to meet their needs. 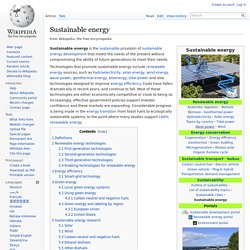 Technologies that promote sustainable energy include renewable energy sources, such as hydroelectricity, solar energy, wind energy, wave power, geothermal energy, bioenergy, tidal power and also technologies designed to improve energy efficiency. Costs have fallen dramatically in recent years, and continue to fall. Most of these technologies are either economically competitive or close to being so. Increasingly, effective government policies support investor confidence and these markets are expanding.

Considerable progress is being made in the energy transition from fossil fuels to ecologically sustainable systems, to the point where many studies support 100% renewable energy. Definitions[edit] Why Renewables Advocates Protect Fossil Fuel Interests, Not The Climate. Are climate activists aware that their renewable energy advocacy is a far more valuable form of greenwashing than any amount of oil and gas industry advertising? 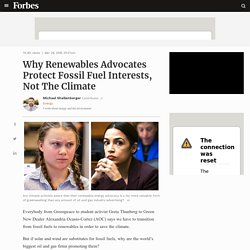 Everybody from Greenpeace to student activist Greta Thunberg to Green New Dealer Alexandria Ocasio-Cortez (AOC) says we have to transition from fossil fuels to renewables in order to save the climate. But if solar and wind are substitutes for fossil fuels, why are the world’s biggest oil and gas firms promoting them? Over the last three years, the five largest publicly-traded oil and gas companies, ExxonMobil, Royal Dutch Shell, Chevron, BP, and Total invested a whopping one billion dollars into advertising and lobbying for renewables and other climate-related ventures. Their ad blitz has targeted the global elite in airports and on Twitter.

“Natural gas is the perfect partner for renewables,” say airport ads run by Norwegian oil and gas giant Statoil. Total. Why Renewables Can’t Save the Planet. When I was a boy, my parents would sometimes take my sister and me camping in the desert. A lot of people think deserts are empty, but my parents taught us to see the wildlife all around us, including hawks, eagles, and tortoises.

After college, I moved to California to work on environmental campaigns. I helped save the state’s last ancient redwood forest and blocked a proposed radioactive waste repository set for the desert. In 2002, shortly after I turned 30, I decided I wanted to dedicate myself to addressing climate change. I was worried that global warming would end up destroying many of the natural environments that people had worked so hard to protect. I thought the solutions were pretty straightforward: solar panels on every roof, electric cars in every driveway, etc. Our efforts paid off in 2007 when then-presidential candidate Barack Obama embraced our vision. The first was around land use. Another challenge was the intermittent nature of solar and wind energies. Related. How fear of nuclear power is hurting the environment [ TED Talk : Michael Shellenberger ] Greenhouse Gas Emissions.