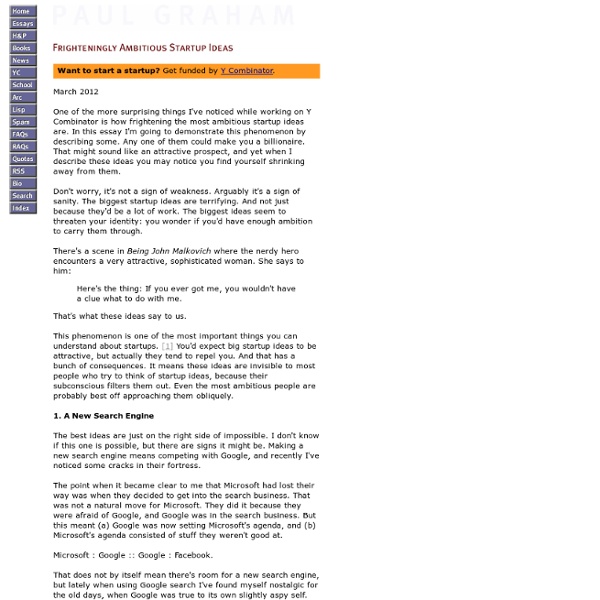 March 2012 One of the more surprising things I've noticed while working on Y Combinator is how frightening the most ambitious startup ideas are. In this essay I'm going to demonstrate this phenomenon by describing some. Don't worry, it's not a sign of weakness. There's a scene in Being John Malkovich where the nerdy hero encounters a very attractive, sophisticated woman. Here's the thing: If you ever got me, you wouldn't have a clue what to do with me. That's what these ideas say to us. This phenomenon is one of the most important things you can understand about startups. [1] You'd expect big startup ideas to be attractive, but actually they tend to repel you. 1. The best ideas are just on the right side of impossible. The point when it became clear to me that Microsoft had lost their way was when they decided to get into the search business. Microsoft : Google :: Google : Facebook. The way to win here is to build the search engine all the hackers use. 2. Whatever you build, make it fast.

500 Startups Peels Back The Curtain On Its Third And Largest Batch Yet It’s Halloween, so it’s the perfect day to unveil the newest group of 500 Startups’ “little monsters”. Yes, this is the name that founder Dave McClure and his partner in crime Christine Tsai give to all the rock star entrepreneurs that grace the halls of their Mountain View offices. 500 Startups, as you may have heard by now, is the early-stage seed fund and incubator program founded in 2010 by the globe-trotting angel investor, which seeds between $25K to $250K in each of its startups that meet its “Three Ds” criteria: Design, data, and distribution. The fall batch kicked off on October 10 and includes 34 awesome startups, which makes this its largest roster to date (the initial batch consisted of 12 startups and the second came in at 21, bringing 500 Startups’ total to 174). The “Demo Days” for this batch of startups has not yet been confirmed, but we do know that they will take place sometime in January 2012. 300milligrams is a priority inbox for team conversations.

Wannabe entrepreneur symptoms and cures I was once a wannabe entrepreneur. Fresh out of college and a summer internship at a VC firm, I thought I knew what I was doing. Though this was 2000, and all startup & VC blogs we've grown to love didn't exist yet, I did have mentors available. I should have leaned on them a lot more, but I didn't, or at least not in the right ways. But all the ways I've failed, and there are certainly many, is not the point. Since 2000, I've been doing and thinking about startups constantly. What follows are some symptoms I've seen over and over that usually (though not always) indicate a wannabe entrepreneur. There are cures. Symptom: a year has gone by and you have nothing to show for it. Cure: get stuff done. Symptom: you haven't really talked to any real customers/users. Symptom: you're going around calling yourself a CEO. Cure: you're a founder. Symptom: you aren't knowledgeable about startups, especially your own space. Cure: read stuff & regularly talk with the smartest startup people you know.

Why Some Startups Succeed And Others Fail: 10 Fascinating Harvard Findings [Excerpt] Fundraising: From $1,000 To $1,000,000 Editor’s Note: The following is an excerpt from Onswipe CEO Jason L. Baptiste’s new book The Ultralight Startup: Launching a Business Without Clout or Capital. To coincide with giving the chapter away, Jason will be choosing one entrepreneur from the TechCrunch audience to meet four of the best venture capitalists today to pitch their idea, which include Andy Weissman, Partner at Union Square Ventures, Alex Finkelstein, Partner at Spark Capital, Brad Feld, Parter at Foundry Group, and David Tisch, Managing Director of TechStars NYC and angel investor. To enter, go here and fill out some simple information about your startup. The winner will be selected by April 20th, 2012. If you pay attention to the headlines about startups getting millions of dollars of funding from investors, venture capitalists, or partnerships, you might think the fund-raising process happens overnight. The reality is a little trickier. The Real Purpose Of Raising Money And Why it Might not Make Sense For You

Agency problems “Agency problems” are what economists call situations where a person’s interests diverge from his or her firm’s interests. Large companies are in a constant state of agency crisis. A primary role of senior management is to counter agency problems through organizational structures and incentive systems. For example, most big companies divide themselves into de facto smaller companies by creating business units with their own P&L or similar metric upon which they are judged. If you are selling technology to large companies, you need to understand the incentives of the decision makers. Agency problems also exist in startups, although they tend to be far less dramatic than at big companies. One of the reasons The Wire is such a great TV show is that it shows in realistic and persuasive detail how agency problems in large organizations consistently thwart well intentioned individual efforts.

The legal checklist every startup should reference I’ve been a corporate lawyer for more than 17 years, and there are certain fundamental legal mistakes that I’ve seen startups repeatedly make (many of which surface when investors are conducting their due-diligence investigation). Accordingly, I thought it would be helpful to provide a simple checklist for startups that includes links to indepth posts for a more detailed discussion. Startup checklist: 1. 2. 3. 4. 5. 6. 7. 8. 9. 10. None of this is rocket science. Scott Edward Walker is the founder and CEO of Walker Corporate Law Group, PLLC, a law firm specializing in the representation of entrepreneurs. [Image via Yes Man/Shutterstock]

10 powerful branding insights that will keep your business moving forward Flickr photo via Woodleywonderworks Just because you’ve built a successful company doesn’t mean you can relax. Succeeding in this ever-changing business world demands that you constantly strive to get ahead…and stay ahead. Easier said than done, right? Well, the following branding insights I’m about to share with you will help you create a brand and business that grows year after year. 1. Sure, this seems obvious, but if you want to start taking some of your competitor’s market share, it all starts with a strong brand. Start with the why – Apple explains why they exist before they even get down to building products. Knowing the basics isn’t enough to dominate your market. 2. Neil Patel Do not ask your customers want they want—just give it to them. That is nothing more than the same old thing with a little improvement. You can only create a strong brand and move your business forward when you create a product that breaks from the past and creates a new path on how we live. 3. 4. 5. 6. Wrong.

Fink warns of emerging market 'black swans' Speaking at the National Association of Pension Funds’ annual investment conference on Wednesday, Fink (pictured) said: “I meet with companies all over the world, and I am seeing the massive effect of new technology on the creation of jobs. And one thing I have learnt is that technology is now cutting jobs more rapidly in the developing world than it is in the developed world.” He said: “These are countries that still have millions of people who need good, 21st-century jobs. I just don’t know if we have enough global GDP to create those jobs. That’s my worry. It’s my black swan of the moment.” Fink added that he expected the term “emerging markets” would cease to have much relevance for investors. He said: “We talk about emerging markets as if they are one compatible, cohesive market – but within emerging markets we have some very good examples of well-run countries, and we have some real garbage. “When China was growing at 10% to 12% a year, it hid the garbage.

Grow Detroit | Grown in the D The Detroit Startup List is a directory of Detroit Startups, Michigan Incubators and Accelerators, Groups & Meetups, and venture capital resources. (Last updated March 31, 2014) Quick links: Detroit Incubators and Accelerators Detroit Coworking Spaces Detroit Startup Events, Meetup Groups Michigan Venture capital and investment 1. 2. 3. We are a proud Detroit Startup. 4. Detroit startups Crowding out angels from startup financings? Photo via Bigstock As early as next week, we may know whether Congress will change US securities laws to permit startups to sell stock to the general public over the internet. You know how, today, companies raise money on Kickstarter by offering products, t-shirts, and other bennies? Imagine those same companies selling stock to investors over a Kickstarter-like platform. Sound too good to be true? Where does this leave angel investing? To borrow from the vernacular of Occupy Wall Street, angels are part of the 1 percent. William Carleton Some angels like the idea of crowdfunding because they know it will be good for entreprenuers to have more financing alternatives. But many entrepreneurs and angels I’ve talked to want to know if angel deals and crowdfunding deals can exist side by side. To put it in legal terms, how should a crowdfunding exemption and the all-accredited Reg D exemption synch up? Let’s use a hypothetical to illustrate some of the potential problems. It’s a bit ironic.

Misunderstanding Apple We’ve come to expect analysts and pundits to misunderstand Apple. More puzzling is when Apple misunderstands itself. My three-week Road Trip of a Lifetime, driving all the way from Key West, FL to Palo Alto, was interrupted by a bout of pneumonia, low blood oxygen, paroxysmal cough and, most alarming, a loss of appetite. Thankfully, all indicators are looking good and I’m back walking Palo Alto’s leafy streets. The succession of wheel time and downtime gave me an opportunity to contemplate two recent controversies: Fred Wilson’s prediction of Apple’s imminent fall, and rumors of Apple’s purchase of Beat Electronics. These are both manifestations of what I’ll call, for lack of a better term, Misunderstanding Apple. I’d be surprised by Wilson’s facile, insight-free truisms, except this isn’t the first time he’s shown a blind spot when considering Apple. Calling Apple “too rooted in hardware” misunderstands the company. Horace is right; Fred Wilson clearly hasn’t done the numbers.