Researchers grow cyborg tissue that can sense its environment 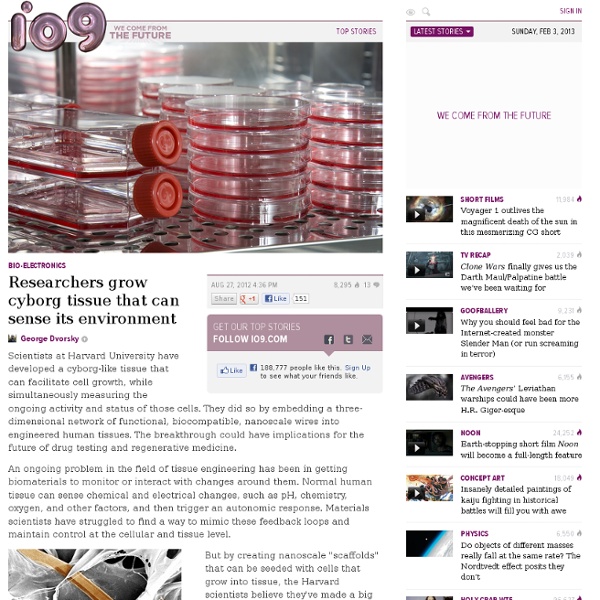 First patient receives next-generation artificial heart replacement The first total artificial heart was implanted in 1969 and was used for a very short amount of time while the patient awaited transplant. The next total device would not come until 1982 with Robert Jarvik’s famous artificial heart. Current artificial hearts have the drawbacks of fixed heart rates, low battery life, or is too large to fit into many patients. The French company CARMAT has developed their own version of this lifesaving device and it was implanted into a patient for the first time on December 18 in a Parisian hospital. The purpose of the heart is to sustain life long enough to find a suitable donor organ. Unfortunately, the device is not suited for everyone, because it’s about three times larger than a normal heart and will not fit inside of every adult’s chest cavity. Though it has been less than two weeks since the device was implanted into the 75-year-old male patient, he seems to be tolerating it quite well.

Humans, Version 3.0 Credit: Flickr user Suvcon Where are we humans going, as a species? If science fiction is any guide, we will genetically evolve like in X-Men, become genetically engineered as in Gattaca, or become cybernetically enhanced like General Grievous in Star Wars. All of these may well be part of the story of our future, but I’m not holding my breath. Genetic engineering could engender marked changes in us, but it requires a scientific bridge between genotypes—an organism’s genetic blueprints—and phenotypes, which are the organisms themselves and their suite of abilities. And machine-enhancement is part of our world even today, manifesting in the smartphones and desktop computers most of us rely on each day. Simply put, none of these scenarios are plausible for the immediate future. There is, however, another avenue for human evolution, one mostly unappreciated in both science and fiction. Neuronal recycling exploits this wellspring of potent powers. But how do I know this is feasible?

Meet the first HEARTLESS man who is able to live without a heartbeat or a PULSE Dr Billy Cohn and Dr Bud Frazier from the Texas Heart Institute installed first 'continuous flow' device last MarchPatient Craig Lewis, 55, no longer has a pulseDevice first tested in calves By Daily Mail Reporter Updated: 20:03 GMT, 26 February 2012 In March of last year, Craig Lewis, 55, was dying from a heart condition that caused build-ups of abnormal proteins, and not even a pacemaker could help save his life. But two doctors from the Texas Heart Institute proposed a revolutionary new solution – install a ‘continuous flow’ device that would allow blood to circulate his body without a pulse. Dr Billy Cohn and Dr Bud Frazier installed the device after removing Mr Lewis’ heart. Scroll down for video Heartless: Craig Lewis, 55, was the first man to have a 'continuous flow' pump to replace his entire heart - and now has no pulse No heart: The device uses blades to circulate blood through the body, replacing the heart 'I listened and it was a hum, which was amazing. Watch video here:

Digital Tattoo Gets Under Your Skin to Monitor Blood | Gadget Lab Bioengineering doctoral student Kate Balaconis shines the iPhone reader against her tattooless arm. Maybe tattoos aren’t just for Harley riders or rebellious teens after all. In a few years, diabetics might get inked up with digital tats that communicate with an iPhone to monitor their blood. Instead of the dye used for tribal arm bands and Chinese characters, these tattoos will contain nanosensors that read the wearer’s blood levels of sodium, glucose and even alcohol with the help of an iPhone 4 camera. Dr. “I had no idea how much to drink, or when,” said Clark, reflecting on her marathon run. Clark’s technology could spell out the eventual demise of the painful finger pricks required for blood tests — assuming users have an iPhone, which Northeastern bioengineering grad student Matt Dubach has customized to read light from the tiny sensors to collect and output data. Within the implant, certain nanoparticles will bind exclusively to specific blood contents, like sodium or glucose.

Transfusions of Synthetic Blood Are Right Around the Corner Making Blood from Stem Cells Researchers from the British universities of Bristol, Cambridge and Oxford have been seeking to manufacture synthetic blood. Their chief goal is to be able to treat patients with complex blood types (and thus difficult to find a match for in donor pools) or those with conditions that require regular transfusions (very exhaustive on the donor supply), like sickle-cell anemia. They have been remarkably successful. They have been able to find and manipulate stem cells from umbilical cord blood, volunteered by mothers, and from blood from adult donors to develop mature and functional red blood cells. Going Clinical Now, National Health Services in the UK has announced these cells will be allowed to be used in the much anticipated clinical transfusion trial, the first of its kind in the world, within the next two years. Nigerian Health Journal Unlimited Blood

Brains flush toxic waste in sleep, including Alzheimer’s-linked protein, study of mice finds Scientists say this nightly self-clean by the brain provides a compelling biological reason for the restorative power of sleep. “Sleep puts the brain in another state where we clean out all the byproducts of activity during the daytime,” said study author and University of Rochester neurosurgeon Maiken Nedergaard. Those byproducts include beta-amyloid protein, clumps of which form plaques found in the brains of Alzheimer’s patients. Staying up all night could prevent the brain from getting rid of these toxins as efficiently, and explain why sleep deprivation has such strong and immediate consequences. Although as essential and universal to the animal kingdom as air and water, sleep is a riddle that has baffled scientists and philosophers for centuries. One line of thinking was that sleep helps animals to conserve energy by forcing a period of rest. Another puzzle involves why different animals require different amounts of sleep per night.

untitled Inside Paul Allen's Plan to Reverse-Engineer the Human Brain - Wired Science In 2003, Microsoft cofounder Paul Allen spent $100 million to build the Allen Institute for Brain Science in Seattle. With laser-equipped microscopes and custom brain-slicers, the institute has mapped the brains of mice, monkeys, and humans, showing which genes are turned on—and where—to better understand vision, memory, autism, and other neural phenomena. Last year Allen ponied up another $300 million to aim the institute at a narrower but more ambitious goal: a complete understanding of how the mouse brain interprets visual information. To succeed, they’ll have to go beyond static gene maps and learn how to watch a living brain in action. The new method will track electrical activity in neurons—not just in one mouse but many. Of all the things you could have invested in, why brain research? Well, as a programmer you’re working with very simple structures compared to the brain. How do you think your investment has paid off so far? Oh, I think it’s had a real impact.

Electronic tattoo An ultra-thin electronic device that attaches to the skin like a stick on tattoo can measure electrical activity of the human body like heart, brain waves and other vital signs without the bulky electrodes used in current monitoring. process[edit] These tattoos are similar to those in children's fake tattoos. It usually starts out on a sheet of plastic, is then applied to the skin and rubbed on from outside the plastic, then the plastic is peeled away, leaving only a very thin, rubber patch that has a layer of flexible silicon wires. Applications[edit] There are many applications in health care, wellness, and fitness. A company called Electrozyme makes electronic tattoos that appear to target athletic performance. There is a specific patent for an electronic tattoo that functions as a lie detector. These tattoo technology also used for authentication purposes, as an alternative to traditional passwords. References[edit]