A Zero-Energy Community: Part 1. zHome is the first zero-energy townhome community in the United States, and it completes construction next month. 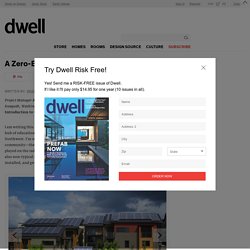 It has taken over five years from initial conception to completion. Located in Issaquah, Washington, this ten-unit townhome project has been a huge team effort, with dozens and dozens of people touching it in significant ways. This community was conceived of as a template for housing in the 21st century, a century where environmental degradation finally is staring us square in the face. One of my favorite quotations is by Stephen Ambrose: “In the 19th century, we devoted our best minds to exploring nature. In the 20th century, we devoted ourselves to controlling and harnessing it. A Zero-Energy Community: Part 2. One of the core environmental benchmarks of zHome is achieving zero net energy and zero net carbon emissions. 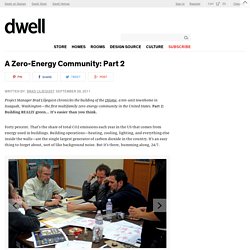 We are achieving this with a number of conservation technologies which reduce energy use by about two-thirds of that of a typical townhome. We then offset the remaining third with solar panels mounted on each zHome roof. The extra energy these panels generate during the summer will offset the amount of supplemental energy the units will need during the cold, dark Northwest winters. Figuring out how to get to zero net energy and zero net carbon emissions at a cost accessible to the mainstream market was not an easy task. A Zero-Energy Community: Part 4. Project Manager Brad Liljequist chronicles the building of the zHome, a ten-unit townhome in Issaquah, Washington—the first multifamily zero-energy community in the United States. 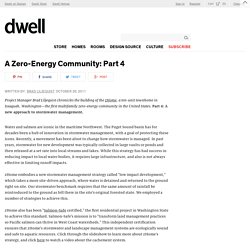 Part 4: A new approach to stormwater management. Water and salmon are iconic in the maritime Northwest. The Puget Sound basin has for decades been a hub of innovation in stormwater management, with a goal of protecting these icons. Recently, a movement has been afoot to change how stormwater is managed. In past years, stormwater for new development was typically collected in large vaults or ponds and then released at a set rate into local streams and lakes.

zHome embodies a new stormwater management strategy called "low impact development," which takes a more site-driven approach, where water is detained and returned to the ground right on site. zHome also has been "Salmon-Safe certified," the first residential project in Washington State to achieve this standard. A Zero-Energy Community: Part 3. How did David Vandervort Architects become connected with the zHome project? 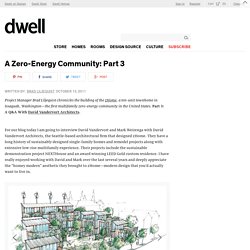 zHome represented, for us, an opportunity to bring together our deep green residential construction experience with a very progressive multifamily dwelling project. We saw it as an opportunity to holistically fulfill many of the sustainable goals we have been advancing since the inception of the firm. Even before being selected for the project we developed an initial concept that introduced the ideas of shared outdoor space, common gardens, green walls, and renewable energy integration that became the design framework for the eventual project. These ideas resonated with the project stakeholders and developer and we were ultimately selected to see the design through to reality.How did you perceive the zHome site? A Zero-Energy Community: Part 5. 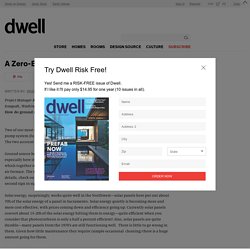 Part 5: How do ground source heat pumps and solar panels work? Two of our most central technologies in achieving zero net energy are our ground source heat pump system (for heating and hot water), and our solar panels (which generate electricity). The two account for about 60% of getting to zero net energy, so obviously they play a key role. Ground source heat pumps are a well-known technology, but are generally not mainstream, especially here in the Pacific Northwest. The system combines three highly efficient processes which together result in a system which over three times more efficient than a typical forced air furnace.

A Zero-Energy Community: Part 6. At our very first meeting we created basic working specifications that really set the parameters for the development of zHome. 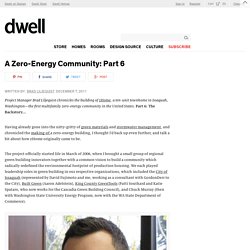 These specifications took a performance based approach that reflected the impact of buildings as a portion of our overall ecological footprint (much like the Living Building Challenge, which interestingly started at nearly the same time as zHome). For example, 40% of all US CO2 emissions are created by building operations, and so we created a zero carbon specification. Recently, the team re-looked at those specs and was really happy to see that other than becoming a larger project, zHome stayed almost entirely consistent with them. But all of us in the group came to the table with early experiences that shaped our expectations and vision for the project. Each of us had wanted to push the envelope a lot further than was happening in 2006. With the project conceptualized, we then set about making it happen.

Building a Zero-Energy Community: Part 7. With the market declining, we went back out to see if we could find a builder to take over the project. 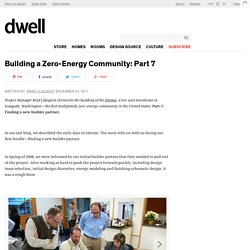 We found Seattle builder Matt Howland and his brother Doug, who ran a medium sized homebuilding company in Seattle. They immediately understood what we were trying to achieve conceptually—to create as near-to-zero impact living house as possible within the constraints and existing technologies of the production home marketplace. It was complicated renegotiating an existing contract, but after three months, we settled terms and assigned the contract over to Howland. A Zero-Energy Community: Part 8. zHome has always really been two things in one—an on the ground, for sale, speculative development, and a market transformation and education process. 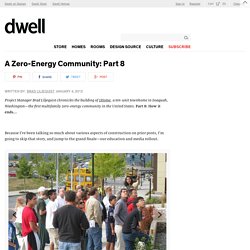 With the completion of the community in September of last year, we rolled directly into my main raison d’etre on zHome, which is using the community to redefine the paradigm for green housing regionally. This last Fall, zHome came full circle to its original vision, which was to change how of a number of audiences—builders, architects, designers, homebuyers, and the general public—understand the ecological footprint homes have, and how that footprint can be radically reduced. During construction, we had a monthly walkthrough, where people could get a behind-the-sheetrock view of what we were doing. These tours proved greatly successful, typically running 20-30 folks each month. In addition, we did regular construction blogs and videos on our website.

Building a Zero-Energy Community: Part 9. It’s no small task to define values-based material selections and the decision-making that comes with it. 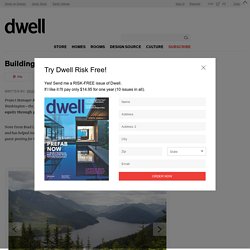 At zHome, we established benchmarks to not only be performance-based, but to also encompass a set of values that dig deeper into sustainability—specifically social equity. Buildings and the materials we use in them contribute roughly 40 percent of the greenhouse gas emissions in the United States. Considering these numbers, net zero energy was not enough for our team. We wanted to create a paradigm shift in market transformation on building materials.

When the zHome partners sat down to address our material selection and creating a replicable set of benchmarks and specifications, we found it simple to determine such things as percentage of water savings, mitigation of water resources, sourcing local materials, and what it meant to achieve net zero energy. What was not so easy for us to define was purchasing for social equity. In particular, we were able to do a lot with FSC. A Zero-Energy Community: Part 10. One of the key principles considered during the design of zHome was that of "Design for Disassembly" (DfD). 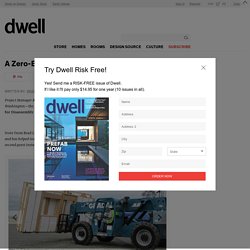 DfD is a building design process that allows for the easy recovery of products, parts and materials when a building is disassembled or renovated. The process is intended to maximize economic value and minimize environmental impacts through reuse, repair, remanufacture and recycling. A DfD process involves developing the assemblies, components, materials, construction techniques, and information and management systems to accomplish this goal.

So when all is said and done, how does zHome stack up when it comes to DfD, now that it’s built? To tease this out, I looked at 14 key questions of DfD through the lens of zHome and provided assertions as to what kind of a letter grade zHome might deserve under each. Here goes! 1. 2. 4. 5. 6. 8. 9. 10. 11. A Zero-Energy Community. More broadly, zHome set a new bar for the Built Green residential certification system. zHome so far surpassed their point level for 5-star certification (exceeding the required 500 points by 350 points) that Built Green will be creating a new certification level based on zHome’s environmental benchmarks. Though zHome is a major player in the catalyzation and acceleration of deep green housing in the Pacific Northwest, however, I feel a broader sea change happening here which is really encouraging.

Six years ago, when we first started zHome, the concept of true zero energy homes seemed like a far off dream. At about that time, the AIA 2030 Challenge was being championed with a vision for zero energy, zero carbon buildings being mainstream by 2030. At the time that seemed like an aggressive, if not impossible goal. Now, I personally think that timeline is too far out in the future.