Electric Vehicles and Their Drawbacks. Electric-powered cars are now the rage. 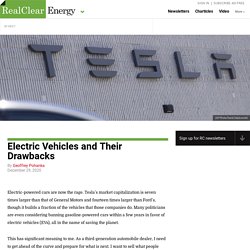 Tesla’s market capitalization is seven times larger than that of General Motors and fourteen times larger than Ford’s, though it builds a fraction of the vehicles that those companies do. Many politicians are even considering banning gasoline-powered cars within a few years in favor of electric vehicles (EVs), all in the name of saving the planet. This has significant meaning to me. As a third-generation automobile dealer, I need to get ahead of the curve and prepare for what is next.

I want to sell what people want to buy. Some say that a 250-mile range is a must for an EV, and I agree. The question remains: What is it like to have to depend upon a public charging stations? Driving from my home and with about 25 miles of battery range (10% of capacity), I headed off to the Reston Virginia fast charger, located in an office park. Fast chargers will bring the battery only to an 80% total charge due to the limitations of lithium batteries. Electric Vehicles and Their Drawbacks, Chapter II. 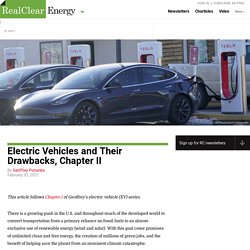 There is a growing push in the U.S. and throughout much of the developed world to convert transportation from a primary reliance on fossil fuels to an almost-exclusive use of renewable energy (wind and solar). With this goal come promises of unlimited clean and free energy, the creation of millions of green jobs, and the benefit of helping save the planet from an imminent climate catastrophe. Even if those promises are accurate, there are serious barriers to making such a transition, especially in our consumer-driven economy. To replace the current gasoline/diesel-powered fleets, consumers would expect electric-vehicle range, cost, and fueling times to be somewhat similar to what they now have. If consumers are disappointed with EV options, they will simply keep their older, more fuel-inefficient, less safe, and more polluting gasoline/diesel-powered vehicles, which today average over eleven years of age.

Could Lithium Shortage Scupper Accelerating Sales Of Electric Cars? Politicians have decreed that Europeans must embrace electric cars, and to make sure, they are trying to force early retirement for internal combustion engine (ICE) powered vehicles. 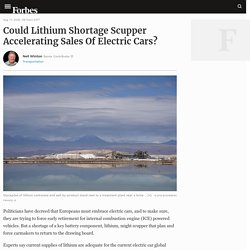 But a shortage of a key battery component, lithium, might scupper that plan and force carmakers to return to the drawing board. Experts say current supplies of lithium are adequate for the current electric car global market share of about 2.6% and probably will keep pace with the expected growth towards 14% in Europe by 2025. But after that demand will outstrip supply and likely halt the predicted powerful acceleration in electric car sales.

Some politicians, activists and enthusiasts experts expect battery-electric vehicle (BEV) sales to reach close to 50% of the global market by 2030, but lithium supplies are unlikely to come close to matching that required battery demand. Meanwhile developments in the lithium market might bring these decisions to a head. Problem after 2005 No problem with lithium supply. (73) WhatsApp. The Dirty Secrets of “Clean” Electric Vehicles – Watts Up With That? Reposted from Forbes. 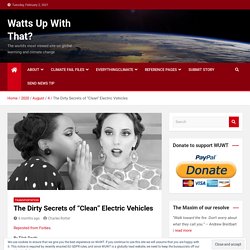 By Tilak Doshi, The widespread view that fossil fuels are “dirty” and renewables such as wind and solar energy and electric vehicles are “clean” has become a fixture of mainstream media and policy assumptions across the political spectrum in developed countries, perhaps with the exception of the Trump-led US administration. Indeed the ultimate question we are led to believe is how quickly can enlightened Western governments, led by an alleged scientific consensus, “decarbonize” with clean energy in a race to save the world from impending climate catastrophe. The ‘net zero by 2050’ mantra, calling for carbon emissions to be completely mitigated within three decades, is now the clarion call by governments and intergovernmental agencies around the developed world, ranging from several EU member states and the UK, to the International Energy Agency and the International Monetary Fund.

Mining out of sight, out of mind And this is just for the UK. Like this: Like Loading... Comparative Environmental Life Cycle Assessment of Conventional and Electric Vehicles - Hawkins - 2013 - Journal of Industrial Ecology.