I am an environmentalist. I place a strong value on clean air and water, diverse ecosystems and care for the wild places of the earth. But in the last few years I have realized there is a dark side to the movement.

It is very wealthy and often has goals that are indifferent to human suffering and needs. The environmental movement thrives on promoting fear of the future. This section is for posts that have made me think.

There are many types of environmentalism and some of them are pitted against each other. Example: Conservationists in Germany would like to protect storks and endangered birds against windfarms (which are killing them). Greens are tearing down nests (in some cases) so that there aren't barriers to windfarm construction and CO2 reduction. Why I Believe Climate Change Is Not the End of the World. “These claims have been disputed, admittedly,” Lights says. 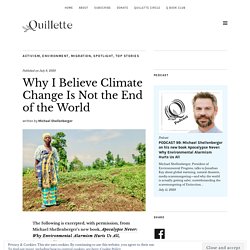 “There are some scientists who are agreeing and some who are saying that they’re simply not true. But the overall issue is that these deaths are going to happen.” “But most scientists don’t agree with this,” says Neil. “I looked through [the Intergovernmental Panel on Climate Change’s recent reports] and see no reference to billions of people going to die, or children going to die in under 20 years… How would they die?” Responds Lights, “Mass migration around the world is already taking place due to prolonged drought in countries, particularly in South Asia. PERC: The Property and Environment Research Center. The Green Civil War. Like many contemporary social movements—#metoo, Black Lives Matter, the Women’s March—the environmental lobby has tended to create an atmosphere of unanimity. In its struggle to win public and elite opinion, it has frequently evoked “science” as something settled and immutable, warning that those who dissent are either self-serving or seriously deranged.

Yet in recent months, there has been growing criticism about the current green orthodoxy, including from people long associated with environmental causes. This has been most widely seen in the strange case of the Michael Moore–produced Planet of Humans, which exposes the rapacious profit-seeking and gratuitous environmental damage caused by the renewable energy industry.

Giant Chinese fishing fleet depletes stocks around world. China’s exploitation of the world’s fish stocks is far greater than previously thought, with research showing the country has more than 12,000 vessels fishing beyond its waters, three times more than previous estimates. 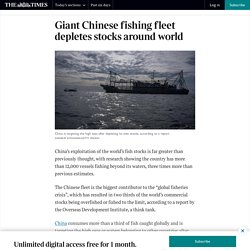 The Chinese fleet is the biggest contributor to the “global fisheries crisis”, which has resulted in two thirds of the world’s commercial stocks being overfished or fished to the limit, according to a report by the Overseas Development Institute, a think tank. China consumes more than a third of fish caught globally and is targeting the high seas or waters belonging to other countries after depleting its own stocks, the report says. 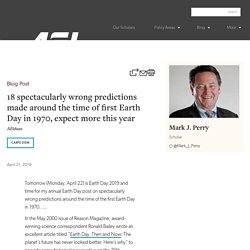 Vital reporting on our changing planet. The Risk-Monger’s Dirty Dozen – 12 highly toxic pesticides approved for use in organic farming. Originally published on November 12, 2015. 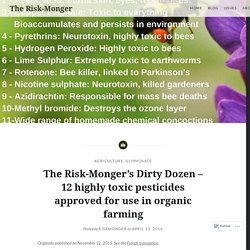 See the French translation. It is commonly believed that organic farmers do not use pesticides and that organic food is therefore safer to consume than conventionally farmed fruit and vegetables. In a UK poll, 95% of the consumers bought organic food because they wanted to avoid consuming pesticides. The world faces 'pollinator collapse'? How and why the media get the science wrong time and again. Published on July 31, 2019 Written by Jon Entine With neither the facts nor the science on their side, they’ve been doing a lot of table pounding lately. 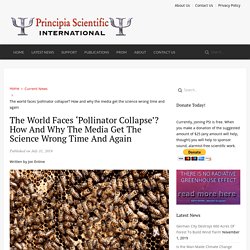 As I and others have detailed in the Genetic Literacy Project and as other news organizations such as the Washington Post and Slate have outlined, the pollinator-collapse narrative has been relentless and mostly wrong for more than seven years now. It germinated with Colony Collapse Disorder that began in 2006 and lasted for a few years—a freaky die off of bees that killed almost a quarter of the US honey bee population, but its cause remains unknown.

For bee alarmists, Groundhog Day comes in June. Will activists finally admit their sins and break out of their pesticide-blaming time loop? 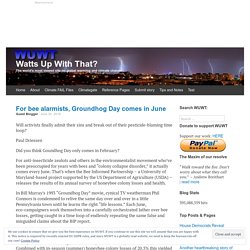 Paul Driessen. The Great Horse Manure Crisis of 1894. Why Renewables Can’t Save the Planet. When I was a boy, my parents would sometimes take my sister and me camping in the desert. A lot of people think deserts are empty, but my parents taught us to see the wildlife all around us, including hawks, eagles, and tortoises. After college, I moved to California to work on environmental campaigns. I helped save the state’s last ancient redwood forest and blocked a proposed radioactive waste repository set for the desert. In 2002, shortly after I turned 30, I decided I wanted to dedicate myself to addressing climate change. I was worried that global warming would end up destroying many of the natural environments that people had worked so hard to protect. I thought the solutions were pretty straightforward: solar panels on every roof, electric cars in every driveway, etc.

Our efforts paid off in 2007 when then-presidential candidate Barack Obama embraced our vision. America Finally Admits Recycling Doesn’t Work. Life-Saving Golden Rice Finally Gets to Poor Farmers Despite Environmentalist Opposition. IRRIGolden Rice which has been genetically engineered to have higher levels of the vitamin A precursor beta-carotene is finally about be to approved for planting by poor farmers in Bangladesh. 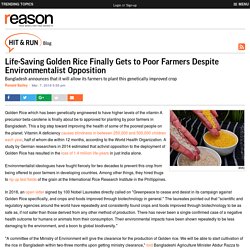 This a big step toward improving the health of some of the poorest people on the planet. Vitamin A deficiency causes blindness in between 250,000 and 500,000 children each year, half of whom die within 12 months, according to the World Health Organization. A study by German researchers in 2014 estimated that activist opposition to the deployment of Golden Rice has resulted in the loss of 1.4 million life-years in just India alone. Environmentalist ideologues have fought fiercely for two decades to prevent this crop from being offered to poor farmers in developing countries. Nature Rebounds. What Happens Now That China Won't Take U.S. Recycling. The same thing is happening across the country. 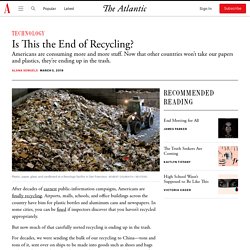 Broadway, Virginia, had a recycling program for 22 years, but recently suspended it after Waste Management told the town that prices would increase by 63 percent, and then stopped offering recycling pickup as a service. “It almost feels illegal, to throw plastic bottles away,” the town manager, Kyle O’Brien, told me. Without a market for mixed paper, bales of the stuff started to pile up in Blaine County, Idaho; the county eventually stopped collecting it and took the 35 bales it had hoped to recycle to a landfill. The town of Fort Edward, New York, suspended its recycling program in July and admitted it had actually been taking recycling to an incinerator for months.

Determined to hold out until the market turns around, the nonprofit Keep Northern Illinois Beautiful has collected 400,000 tons of plastic. This end of recycling comes at a time when the United States is creating more waste than ever. How Our Clothing Poisons the Environment. Undercooked: An Expensive Push to Save Lives and Protect… For many decades, it was one of the globe’s most underappreciated health menaces: household pollution in developing countries, much of it smoke from cooking fires. 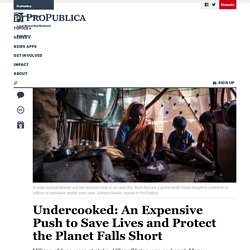 The dangerous smoke — from wood, dung or charcoal fires used by 3 billion people in villages and slums across Africa, Central America and Asia — was estimated by health officials to shorten millions of lives every year. The World Health Organization in 2004 labeled household pollution, “The Killer in the Kitchen.” Women and children nearest the hearth paid the greatest price. If the health costs were not ominous enough, many environmental advocates worried that what was known as “biomass” cooking also had potentially grave consequences for the planet’s climate. Emissions from the fires were contributing to global warming, it was feared, and the harvesting of wood for cooking was helping to diminish forests, one of nature’s carbon-absorbing bulwarks against greenhouse gases. Kirk R. A base of operations was offered by the U.N. Easter Island’s “ecological suicide” – myths and realities.

The island’s demise was a human and Little Ice Age tragedy, not “ecological suicide” Guest essay Dennis Avery In a recent New York Times column, Nicholas Kristof misleads us about the awful history of Easter Island (2,300 miles west of Chile), whose vegetation disappeared in the cold drought of the Little Ice Age. 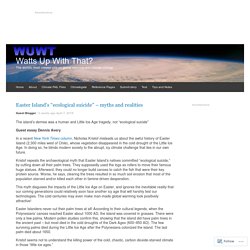 In doing so, he blinds modern society to the abrupt, icy climate challenge that lies in our own future. Evidence Meltdown. The green movement has misled the world about the dangers of radiation. By George Monbiot. Published in the Guardian 5th April 2011. The One-sided Worldview of Eco-Pessimists. This essay draws in part on the authors’ new book Population Bombed! Exploding the Link Between Overpopulation and Climate Change (Global Warming Policy Foundation, 2018). The Pull of Environmental Narratives. Vertical Farms: Thermodynamic Nonsense - Sustainable Dish.

The Breakthrough Institute - Reclaiming Environmentalism. We Will Make You Green. Green Tyranny: Exposing the Totalitarian Roots of the Climate Industrial Complex by Rupert Darwall Encounter Books, 2017, 352 pages, US$25.99 ____________________________________ Environmentalist scare stories – Never mind! Burning Man and Green Homes: When Collectivist Dreams Collide With Reality. It'd be nice if good intentions and kind words were enough, but they aren't.

In the economy, as in nature, there are certain laws you cannot break without suffering the consequences. Why Paul Ehrlich Matters. Ramming the ‘Great Food Transformation’ Down Our Throats. Publications - Analysis of Greenpeace Business Model. Greenpeace have successfully created a public perception that they are fighting to protect humanity, nature and the environment from the evils of corrupt industries and vested interests. The WWF: Thugs & Guns Against Pygmies. Happer’s detailed response to Karoly on climate change. Is Global Warming Making Us Hungrier? by Bjørn Lomborg. Robust Science! More Than 30 Contradictory Pairs Of Peer-Reviewed Papers. How to make the world better. Really. With Dr. Bjorn Lomborg. Extinctions and Population Declines. The Breakthrough Institute - Welcome to the Narcisscene. Earth Hour: A Dissent. This excellent essay on the Earth Hour event, to be held tonight at 8:30PM in every local time zone, is an eye-opener.

Earth Hour is a testament to stupidity, in my opinion, and deserves to be mocked. North Korea reminds us what it is like to like in darkness, both politically, and in energy poverty. Every hour is Earth Hour in North Korea – satellite image of the Korean peninsula at night, showing city lighting. Earth Hour: A Dissent. Canadians are realizing foreign groups sabotaged our energy economy — for no good reason. The Breakthrough Institute - A Locavore’s Dilemma.

Latest study confirms an animal-free food system is not holistically sustainable. By: Sara Place, Ph.D Let’s be clear, a healthy and sustainable food system depends on having both plants and animals. Researchers at USDA’s Agricultural Research Service and Virginia Tech just published a study in the Proceedings of National Academies of Sciences confirming this socially debated fact. The study examined what our world would look like without animal agriculture in the U.S. The Breakthrough Institute - The Future of Food. Our fertilizer is killing us. Here’s a fix.