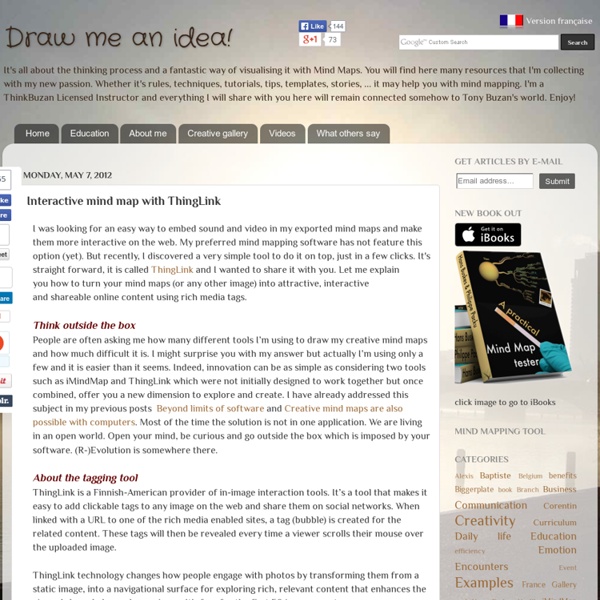 Innovation can be as simple as combining two tools such as iMindMap and ThingLink which were not initially designed to work together. Discover how to turn your mind maps (or any other image) into attractive, interactive and sharable online content using rich media tags from ThingLink. I was looking for an easy way to embed sound and video in my exported mind maps and make them more interactive on the web. My preferred mind mapping software has not feature this option (yet). But recently, I discovered a very simple tool to do it on top, just in a few clicks. It's straight forward, it is called ThingLink and I wanted to share it with you. Think outside the box People are often asking me how many different tools I’m using to draw my creative mind maps and how much difficult it is. About the tagging tool ThingLink is a Finnish-American provider of in-image interaction tools. Click here if you want to access a larger version of the interactive map. Add tags in a few clicks

14 Brilliant Uses for Mind Maps – Engage Your Whole Brain Mind maps engage your whole brain and allow you to see the big picture. A mind map is a whole-brain method for generating and organizing ideas which is largely inspired by Leonardo da Vinci’s approach to note-taking. The concept was brought into the mainstream by Tony Buzan and is based on patterns found in nature, and on research on how humans think and how the brain works. In “How to Think Like Leonardo da Vinci”, Michael J. Gelb explains that by using mind mapping regularly, you can train yourself to be a more balanced thinker, like da Vinci. Zoho Office Suite The Zoho Office Suite is a Web-based online office suite containing word processing, spreadsheets, presentations, databases, note-taking, wikis, customer relationship management (CRM),[1] project management,[1] invoicing, and other applications developed by ZOHO Corporation (formerly AdventNet Inc.), a US-based[2][3] company.[4][5][6] It was launched in 2005 with a web-based word processor. Additional products such as spreadsheets and presentations, were incorporated later into Zoho.[7] Zoho applications are distributed as software as a service (SaaS).[1] Features[edit] Zoho uses an open application programming interface[8] for its Writer, Sheet, Show, Creator, Meeting, and Planner products. It also has plugins into Microsoft Word and Excel, an OpenOffice.org plugin, and a plugin for Firefox.

Mindomo Mindomo is an online mind map Software where users can create, view and share mind maps in their browser.[1] Mindomo is offering the basic services for free, while charging for advanced features. Unregistered users can view the mind maps, while registered users are permitted to create and share mind maps. The free version limits the number of private maps to three and disables some special features like spell checking. Mindomo was first available in February 2007. Mindomo also has a desktop version based on the Adobe Air runtime.

Scapple Rough It Out Scapple doesn’t force you to make connections, and it doesn’t expect you to start out with one central idea off of which everything else is branched. There’s no built-in hierarchy at all, in fact—in Scapple, every note is equal, so you can connect them however you like. The idea behind Scapple is simple: when you are roughing out ideas, you need complete freedom to experiment with how those ideas best fit together. It’s Scapple Simple Creating notes is as easy as double-clicking anywhere on the canvas and then typing; making connections between ideas is as painless as dragging and dropping one note onto another. FreeMind As with other mind mapping software packages, FreeMind allows the user to edit a hierarchical set of ideas around a central concept. The non-linear approach assists in brainstorming new outlines and projects as ideas are added around the mind map.[2] As a Java application, FreeMind is portable across multiple platforms and retains the same user interface, causing some amount of variation from the common interface on each platform. Mac users may notice the most difference from their traditional user interface, but a MacWorld reviewer says the software's features should still appeal to the segment of users who accept function over form.[5] FreeMind was a finalist for Best Project in SourceForge.net's Community Choice Awards for 2008, which featured Open Source software projects.[6][7]

DebateGraph DebateGraph is an award-winning, web-platform for visualizing and sharing networks of thought – and opening reasoning and action to collaborative learning and iterative improvement.Create your own maps and explore and contribute to maps created by amongst others: CNN, the White House, the UK Prime Minister's Office, The Independent, and the Foreign Office. DebateGraph is being used in over 100 countries and helping people reason and learn together more effectively in many different fields, including: education, health, governance, media, publishing, environment, conflict resolution, conferences, group facilitation, and public consultation and planning.There's no limit to the number of people who can collaborate on maps, and you are welcome to start building and sharing public and private maps on any topic now. Copyright © 2014 Thoughtgraph Ltd.

Word Clouds for Kids! ABCya is the leader in free educational computer games and mobile apps for kids. The innovation of a grade school teacher, ABCya is an award-winning destination for elementary students that offers hundreds of fun, engaging learning activities. Millions of kids, parents, and teachers visit ABCya.com each month, playing over 1 billion games last year.